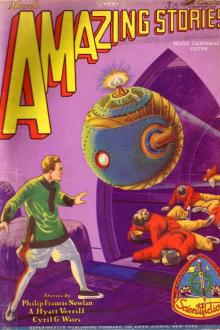 It was no accident that Buck Rogers became an almost instantaneous success as a comic strip. Behind its creation was one of the most logical, scientifically planned "worlds of if" ever conceived. The re-presentation of these original Buck Rogers stories secures for Philip Francis Nowlan the important place he deserves as a shaper of modern science fiction.

ry in our advance on Nu-Yok.

Fortunately our contact guard had been able to leap into the upper branches of a tree without being discovered by the Bad Bloods, for their discipline was lax and their guard careless. She overheard enough of the conversation of their Bosses around the camp fire beneath her to indicate the general nature of the Han plans.

After several hours she was able to leap away unobserved through the topmost branches of the trees, and after putting several miles between herself and their camp, she ultrophoned a full report to her Contact Boss back in the Wyoming Valley. My own Ultrophone Field Boss picked up the message and brought the graph record of it to me at once.

Her report was likewise picked up by the Bosses of the various Gang units in our line, and we had called a council to discuss our plans by word of mouth.

We were gathered in a sheltered glade on the eastern slope of First Mountain on a balmy night in May. Far to the east, across the forested slopes 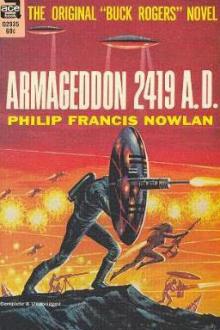 Buck Rogers just got things started in the first book.
There is still work to do, if the world is to be taken back from the Han..
Buck, Wilma and the forest gangs take on what is hoped to be the final battle.