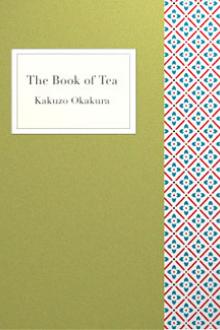 as boiled, the Powdered-tea which was whipped, the Leaf-tea which was steeped, mark the distinct emotional impulses of the Tang, the Sung, and the Ming dynasties of China. If we were inclined to borrow the much-abused terminology of art-classification, we might designate them respectively, the Classic, the Romantic, and the Naturalistic schools of Tea.

The tea-plant, a native of southern China, was known from very early times to Chinese botany and medicine. It is alluded to in the classics under the various names of Tou, Tseh, Chung, Kha, and Ming, and was highly prized for possessing the virtues of relieving fatigue, delighting the soul, strengthening the will, and repairing the eyesight. It was not only administered as an internal dose, but often applied externally in form of paste to alleviate rheumatic pains. The Taoists claimed it as an important ingredient of the elixir of immortality. The Buddhists used it extensively to prevent drowsiness during their long hours of meditation.

C. Alan Loewen
5
Okakura Kakuz&#333; (1862–1913) was a Japanese scholar who contributed to the development of arts in Japan. Outside of Japan, he is chiefly remembered today as the author of The Book of Tea.

The Book of Tea is truly a beautiful work in spite of its harsh criticism of the West, but at the time it was written, Japan was sacrificing its traditions and its culture in favor of Occidental trappings. Kakuz&#333;’s desire was not to have Japanese art remain in stasis, but mature and evolve along lines untouched (or “untainted” as Kakuz&#333; would probably say) by Western influences.

In this book, Kakuz&#333; goes into great detail about the spiritual development of Japan and how the celebration of tea, seen at that time more as an artistic and spiritual art form, developed from a fusion of Buddhism, Taoism, and Shintoism.

Alas, as important as Kakuz&#333;’s work was during his lifetime, today Japan is one of the most secular countries in the world having embraced a more materialistic worldview. The West has won.

This would have saddened Kakuz&#333;, but would not have caught him completely by surprise as the Japanese Tea Ceremony teaches all things are ephemeral and that all things, including countries, pass away.

So I leave you with this quote from the book before we once again turn and submerge ourselves into our sterile and secular world:

Meanwhile, let us have a sip of tea. The afternoon glow is brightening the bamboos, the fountains are bubbling with delight, the soughing of the pines is heard in our kettle. Let us dream of evanescence, and linger in the beautiful foolishness of things.