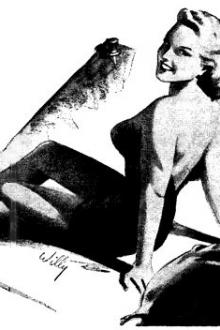 You're not expected to believe this story since it's the kind of thing that science calls impossible. But anyway, she happened. Who? Why—

at Willy had sketched her. She was a drawing. Tri-dimensional, but nonetheless a figment of Willy's imagination. Yet she was solid. I was getting confused again, trying to tie it, so to fend off a return of the shakes I forced another blank into my mind. It was easier, this time. The whole thing was so ridiculous it was intriguing.

I looked at him. "Yeah. M-hmm." I looked down at Red. She was sitting on my kneecap, combing her hair. "So just what seems to be the problem?"

His eyes were pathetic. "Again, like I told you. I'm too big for her."

"Yeah," I said. "Uh-huh." It had to be as simple as that. Something practical-like; for Willy, like I said, was basically a practical guy. Or practically a basic guy. I frowned at him, for the answer was also a simple one.

"Then why don't you draw her full size?" I asked.

Willy looked miserable. "I do."

Dick Thornton
4
I read a lot of SF in the 50's, but don't remember Lewis Parker. A shame, because his writing is very good. I really enjoyed this humorous story, even if it is a stretch to call it science fiction.
09/22/2010