The Lay of Havelok the Dane

The Lay of Havelok the Dane
0
(0 Reviews) 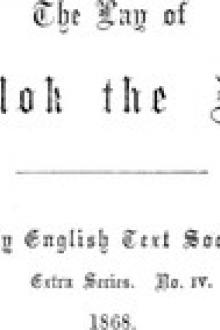 ch version was doubtless written in England by a subject of an English king. That the language is French is due merely to the accident that the Norman conquerors of England had acquired that language during their temporary sojourn in France. From every point of view, whether we regard the British tradition, the Anglo-Norman version, or the version printed in the present volume, the story is wholly English. It is not to be connected too closely with the Armorican lays of Marie de France.[5]

§ 5. We next come to the abridgment of the same as made by Geffrei Gaimar, who wrote between the years 1141 and 1151. In one place, Geffrei quotes Gildas as his authority, but no conclusion can easily be drawn from this indefinite reference. In another place, he mentions a feast given by Havel