The Boy Scouts Book of Stories 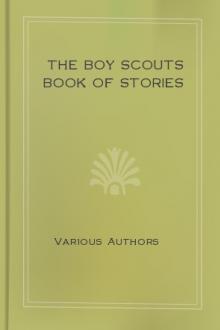 The luncheon bell rang, and they hurried down. The Big Man was overwhelmed by the discovery. If Butcher didn't cover first, how could they ever beat Andover and the Princeton freshmen? Even Hill School and Pennington might trounce them. He fell into a brown melancholy, until suddenly he caught the sympathetic glance of Mrs. Rogers on him, and for fear that she would think it was due to his own weakness, he began to chat volubly.

He had always been a little in awe of the Butcher. Not that the Butcher had not been friendly; but he was so blunt and rough and unbending that he rather repelled intimacy. He watched him covertly, admiring the bravado with which he pretended unconcern. It must be awful to be threatened with expulsion and actually to be expelled, to have your whole life ruined, once and forever. The Big Man's heart was stirred. He said to himself that he had not been sympathe

Dick Thornton
5
After reading the first two stories, I have to agree with the editor that it is a collection of excellent stories for young boys.
09/07/2010