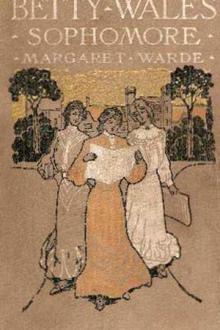 Those who knew Betty Wales as a Freshman will follow her into her second year at college with keen pleasure. She and her friends are the same jolly, high-spirited creatures they were, and more lovable and interesting than ever.

were spending the night with her, and that they wished Betty to hurry right along and help eat up the food.

"Lights don't count on the first night, they say," explained Nita, who, like Betty, had spent her freshman year off the campus. "So we've got to make the most of it."

"But what are the B's doing over here?" demanded Betty in perplexity. "Have they moved away from the Westcott?"

Nita laughed. "No indeed, but the rest of their floor hadn't come, and they felt lonely and came over to see me. They say their matron won't miss them the first night, and I'm sure I hope ours won't find them here. They seem to think it's all right."

Betty pulled on her gray kimono, brushed the hair out of her eyes, and followed Nita through the hall and up-stairs to the fourth floor. There was a wilderness of trunks in the narrow passages. Every girl must have three at least, Betty thought. And their owners appeared to be in no haste about unpacking; the serious