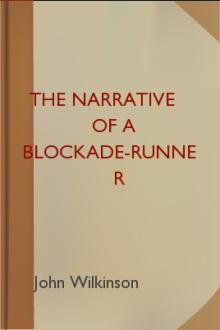 In deference to the judgment of two or three literary friends, I have entitled this, my first attempt at authorship, "The Narrative of a Blockade-runner." They do not agree with Shakspeare that "a rose by any other name would smell as sweet," to the reading public; nor that it is always advisable to call a thing by its proper name. It will be seen, however, by any reader who has the patience to peruse the work, that it embraces a wider scope than its title would imply. I have endeavored to give a full account of the passage by the U. S. fleet of the forts below New Orleans; and to contribute some facts that will probably settle the controversy, in the judgment of the reader, as to the real captors of that city. "Honor to whom honor is due."

nerations to come. Wise in council, eloquent in debate, bravest and coolest among the brave in battle, and faithful to his convictions in adversity, he still lives to denounce falsehood and wrong. Truly the old hero, in all he says and does, "gives the world assurance of a man."--I allude to Gen. J. A. Early.

When Fort Powhatan was abandoned, I was ordered to the command of a battery at Acquia Creek on the Potomac. Although situated upon the frontier, few incidents occurred there to vary the monotony of our lives. Occasionally some of the gunboats guarding the river would steam in, and exchange a few shots with us; and we witnessed frequent skirmishes between them and Walker's afterwards famous battery of flying artillery; but ammunition being extremely scarce at that period in the Confederacy, the orders to us were peremptory to be very sparing in the use of it.[1]

The battery at Acquia Creek was constructed at the terminus of the railroad from Fredericksburg, and was manned by an infantry comp