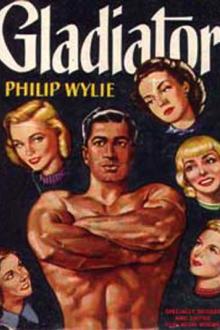 The product of an amazing biological experiment, Hugo Danner was born and grew up free from the fears that inhibit other men... with an infinitely superior mind and a sex-drive that put insatiable women at his feet and turned men green with envy. Considered by many to be the inspiration for the character Superman.

Faint annoyance moved her. "Yes. That's what one has. What are we going to do?"

She softened. "So am I, Abednego."

Then a hissing, spattering sound issued from the kitchen. "The beans!" Mrs. Danner said. The second idyll of their lives was finished.

Alone in his bed, tossing on the humid muslin sheets, Danner struggled within himself. The hour that was at hand would be short. The logical step after the tadpoles and the kitten was to vaccinate the human mammal with his serum. To produce a super-child, an invulnerable man. As a scientist he was passionately intrigued by the idea. As a husband he was dubious. As a member of society he was terrified.

That his wife would submit to the plan or to the step it necessitated was beyond belief. She would never allow a sticky tube of foreign animal matter to be poured into her veins. She would not permit the will of God to be altered or her offspring t

kveto from prague
5
One of the best books on this site. Basically the book that inspired the authors of "superman" but it takes a much more realistic, less heroic look at how a superhuman would navigate the world.
No idea what foul language is being refered to in the below review.
01/30/2019

Lisa Carr
5
A remarkably good book with a horrible title and cover. The opening part with the bumbling professor and his wife is a bit slapstick, but once Hugo is born, it becomes his story. He is blessed with super strength and speed, and almost invulnerable. He tries to hide his abilities and blend in.
At the university, at sea, in war, in business--his attempts to control his gifts brings him misery.
This novel isn't The Sun Also Rises, but it shares the post WWI/depression era existential disillusionment with war, politics, and business, as Hugo looks for a reason to live. The writing is good and unobtrusive, the novel is completely character-driven and has the same kind of random-adventure plotting as Candide or Don Quixote. The purported foul language and sex is trivial.
04/21/2015

JoJo Biggins
3
Two words summarize this story: 1) weird, 2) pointless. Both of those words stem from the story being character driven rather than plot driven. I mean, seriously - there is no plot. This is the story of an extraordinary person trying to figure out who he is - and never finding the answer. He simply dies at the end of the story, and that's that. Pointless.

Nevertheless, the story is so different from any other that it is quite engaging. Unfortunately, it is dragged down by pointless and gratuitous sexual encounters, and quite a few instances of extremely offensive foul language. It also ridicules religion in the same vein as would a modern liberal. Quite a disappointment from a story that had so much potential.
08/20/2014

Garland Coulson
5
An amazing story, I first read years ago and was pleased to find in ebook format.

Evokes striking images of the time the characters existed.

I had always wondered if this character was the inspiration for Superman who was first published in 1938, but according to Wikipedia, Siegel signed an affadavit that claimed Superman was not influenced by Gladiator.

In any event, a superb story and a much stronger character in my opinion than Superman.
12/04/2010

Dick Thornton
5
An excellent book. The first two-thirds are especially excellent, though I felt the ending didn't live up to the beginning. Philip Wylie is a wonderfully gifted author.
09/01/2010

juicecat
5
This was an excellent book. The main character become more conflicted as the story moves on and the reader is drawn more and more into the plight of a person who would seem to have everything. Highly recommended!
06/21/2010

Barrie Suddery
4
An excellent read and like the other reviewer, I'm surprised it's never been made into a movie.

In addition to character elements which could have inspired the creation of Superman, I find many elements here (eg,the serum that created Hugo's strength) that could have inspired Captain America as well as Spider-Man, given the emotional troubles Hugo endures throughout his life.

momable
5
What a "SUPER" book! This book is excellent, the main character really makes you feel for him. Hard to put down. Surprised this was never made into a movie.
02/18/2010