The Nile Tributaries of Abyssinia and the Sword Hunters of the Hamran Arabs
5
The first in Baker's trillogy of his explorations of the Nile and ultimately efforts to suppress the Arab slave trade down the Nile.

In this volume Baker and his wife explore the tributaries of the Blue Nile, confirming and expanding Bruce's explorations of a century earlier.

The is a stellar adventure. Baker is the consummate British Explorer of the late 1800's, and these books are likely the inspiration for the latter day fictional adventure heroes of H.Rider Haggard, E.R. Burroughs, and others.

Baker is an incredible game hunter and marksman, a great rider, a man of steel nerves and courage. He is a wonderful real life example of the morality of nineteenth century England and its empire. He acts to protect the weak, treat those he meets with honesty and fairness and record as best he can the reality of his hardships.

This book will not be popular among those who insist on viewing the past through a modern day lens. Baker kills a lot of animals, occasionally uses the N word, regards many cultures he finds as packs of barbaric savages --so much for the liberal ideal of the noble savage. He speaks honestly of the depravity of the Arab slave trade, and harps on the necessity of the basic morals that bring civilization to \'lesser\' cultures.

This book is more \'fun\' than the two that follow. The later works describe much more difficult journeys. He shoots a lot animals and stays fairly healthy. 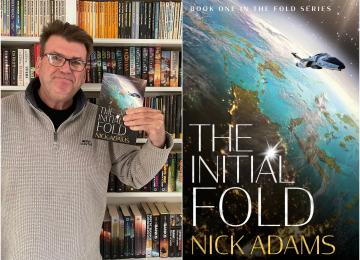 Nick Adams - Space Opera Based on Upcoming NASA Technology
FEATURED AUTHOR - Nick Adams grew up in a small village near Maidstone in Kent, England and right from an early age was a fervent NASA, space and Apollo fan. After watching the first moon landing in 1969 and the subsequent moon missions that followed, he discovered science fiction books and cut his teeth reading Asimov, E. E. Doc Smith and Alan Dean Foster. In more recent times, Andy Weir and Peter F Hamilton to name but two, have joined them on the bookshelves.