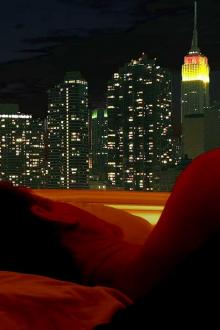 Miles A. Maxwell
About Miles A. Maxwell
Long before 9/11, Miles used to lie in bed at night in his apartment on Manhattan's Upper West Side -- just across the park from where Cynthia, Steve and Melissa would be living -- and listen to the sirens. Wondering when someone would drop "The Big One" on The City.
. . . Wondering how the millions of survivors -- if there would be any -- could possibly escape . . . the city government itself encouraging twenty-four hour personal survival kits -- food, medicines, other critical essential personal items. See: Preparing for emergencies in New York City.

As time went on, whenever Miles would leave The City for a day or so for one reason or another, he would return with a creeping, growing, building sense of dread. Driving toward that beautiful skyline on I-95 or the 1 & 9, he would look at the skyscrapers and think, "Is this the day?"

He stuck with The City. It was his home. But to excise the paranoia, he spent his spare time writing the beginnings of this story: Loss Of Reason . . .

Until one night some homeless person stabbed a ballerina to death only a block away from his apartment on the street behind. It was a small, solitary death in the scope of the thousands who die in The City every year, but he took it as a sign. He never knew her, but the attack felt close and personal. He knew it was time to get out.

So he moved west. Out to the Rockies, to the desert, where he no longer felt trapped by the masses. Where he could see the horizon on any given day simply by walking outside. Where the sky was open and the air was clear. It took six months to recover as the paranoia slowly left him.

Was it truly paranoia? He watched TV that terrible day, like all Americans, with a horror that would have been sheer terror had he stayed, as the Twin Towers rumbled down. Not as a pinnacle of terrorism in The City, but as the beginning of things much worse to come.