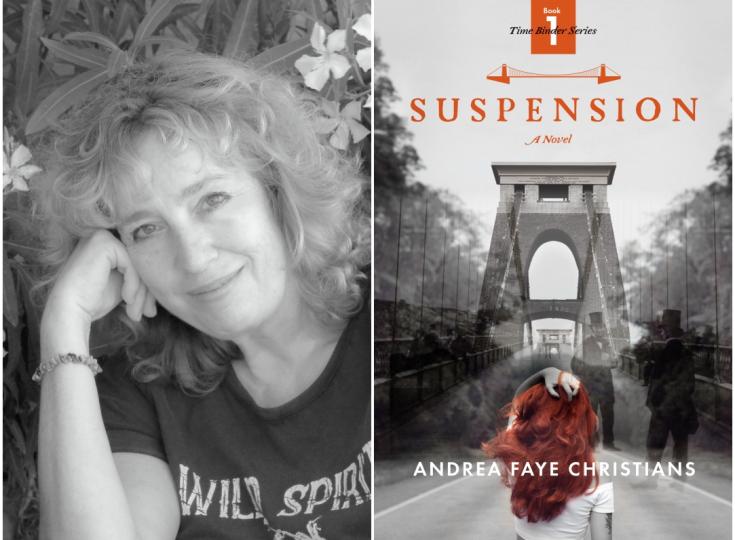 Andrea Faye Christians was born and raised in Swansea, South Wales. Following a successful career in British radio including the BBC, she moved to the southern Mediterranean island of Malta to pursue her dream of becoming a freelance writer. A decade later she bought a farm in the Madonie mountains of Sicily where a menagerie of rescue animals found their way to her. With a son in Malta and a daughter in Sicily, Andrea has a home and her heart in both places, and she now divides her time between the neighboring islands. Suspension is her debut novel. She is working on the second book in the Time Binder Series as well as a novel entitled Chemo Club. As our Author of the Day, she tells us all about her book, Suspension.

The book is set in the present day and is essentially a time travel fantasy tale that combines historical fact with fiction. It‘s a story about a divorced woman in her early thirties, who could be considered to be borderline depressed. Still hurting over her failed marriage, and having returned from a hiatus in France, Carla Thompson finds herself living in a shabby flat in Bristol (UK) with little in the way of a social life. One evening, lying on her sofa, and having drunk a little too much wine and smoked a joint, she falls asleep - but little does she realize that the out-of-body experience that follows is not a dream and that she has died and is now suspended between worlds. Whilst struggling to come to terms with this, Carla Is drawn to the majestic Clifton Suspension Bridge, where she discovers that she is a Dream Walker - a revelation made by Isambard Brunel, the legendary civil engineer who designed the bridge and who now acts as guardian to its secrets. Initially reluctant to take on the role, as events progress, Carla slowly starts to understand the importance of her destiny and, in helping others, she exorcises her own demons and finds meaning in her life. However, having finally found true love she is forced to make an impossible choice.

What inspired you to write about someone who finds herself suspended between two worlds?

The Clifton Suspension bridge was my original inspiration. It was a ground-breaking feat of civil engineering in its time, and I was always mesmerized when I passed beneath it whilst on my way to visit my parents in Swansea. I always felt there was a story waiting to be written. The fact that was a suspension bridge made me start to think of it as a portal or a gateway between this world and the next. The name Suspension actually has a double significance and once I thought of the idea of a person somehow caught between two worlds the rest of the story just flowed.

Tell us more about Carla Thompson. What makes her tick?

Carla is a divorced 31-year-old English teacher living in a rather shabby flat in Bristol, UK. Still hurting over her failed marriage and back from a hiatus in France, she has little in the way of social life. I chose to make her early thirties because I wanted her to have lived but also to be young enough to evolve and develop as that is an important aspect of the story. Carla’s life isn’t great. She is disappointed and could be classified as borderline depressed. She believes that she is anything but extraordinary - but of course, she is!

She is a reluctant heroine, At first, she struggles to comprehend what has happened and what destiny has in store for her. Suspended between two worlds she is initially headstrong and angry but eventually, she finds a sense of purpose in helping others in her predestined role as a Dream walker. She also finds true love but is ultimately faced with an impossible dilemma.

Why did you pick an eighteenth-century civil engineer as the person to cross Carla's path?

I remember being absolutely enthralled when I started researching the Clifton Suspension Bridge and discovered that the man behind it was Isambard Kingdom Brunel. He was way ahead of his time, a true genius, and such an enigmatic character. As I found out more about him it left me even more convinced that I needed to proceed with the story. His relationship with Carla is at times tense but they have a bond that was secured by Carla saving his life in the 1828 flood of the Thames tunnel during its construction. I took this real-life event and wove it into the storyline, and it remains one of my favorite scenarios in the book.

How much research did this book require from you to make the history parts of it ring true?

Today research is made easier by the internet and online resources. I watched documentaries about Brunel and read up on the flood incident before writing it. It’s important to pay attention to detail from the clothing that was worn to the state of the river Thames which was heavily polluted at the time - but Brunel is such an interesting character, and the bridge has an interesting story so in many ways I felt I was spoilt for choice as to what to include.

I think I pretty much answered this in the previous question. It was finding out about Brunel and his achievements and also the sheer tenacity he demonstrated in certain difficult situations in his life. In Suspension, he is depicted as a relatively calm character, but he is deep thinking and must be strong to deal with Carla.

I can’t overstress the need for attention to detail attention. For example, in one scene in Suspension, I talked about a black and white photograph but then I realized that cameras had not yet been invented at the time I was writing about. It's just a small example, but there were various instances of having to check up on facts and information and there’s a lot more to do in the sequel that I’m currently working on as it focuses on several timescales including the future – but of course, there I can use my imagination!

The cover was designed by the amazingly talented, Troy King, who works with Lucid House. He was given a brief about the novel. It was going to be a time travel, romantic fantasy tale and that the bridge was an important element that should be represented in the story. He came up with several different design options, but I chose this one as I feel it really complements the story.

This happens to me a lot when I’m writing as I don’t like to plan too rigidly. I generally let the characters evolve as I write them and flesh them out more in the rewrite. Sometimes, I’ll take facets of real people and weave them into the characters whilst there are others who are totally imaginary, but they all seem real to me and I must often remind myself that they don’t actually exist. When I finished Suspension, I actually felt quite sad as if I was saying goodbye to friends and it was this that played a big part in making me decide to write the sequel.

You've lived in multiple places from South Wales to Malta to Sicily. How has this influenced your writing and worldview?

It’s taught me to appreciate different cultures and mindsets, as what is normal in one country may not be in another. The traditional mountain villages of Sicily, for example, are very different from Malta which is bustling and cosmopolitan. Each has its own charm. I’ve also realized that people are very much the same wherever you live. Writers tend to observe and sometimes the strangest of things, such as a mannerism like the quirky way someone holds a cigarette, may find itself in a character

They each presented their own challenges, but I wanted the protagonist, Carla, to be a well-rounded individual who evolves as the story progresses, as her personal journey is an important part of the story. I also felt that some of the minor characters need to be engaging. Matilda, the psychic, was particularly fun to write. I could see her clearly in her mind and hear her laugh whilst Hemingway is a bit of a rebel and likes to play devil’s advocate just to annoy Brunel in certain cases.

What did you have the most fun with when writing Suspension?

I think the best bit about writing Suspension was, that as it is a fantasy novel, anything is possible. I have never written anything like this before and apart from checking that certain historical facts were correct, I had free reign to take the characters wherever I wanted. That was very liberating and made it exciting to write.

There was a time when I was very particular about where I liked to write. I used to like to be at my desk but in recent years I have changed habits and will write just about anywhere., I always keep a notebook by the side of the bed as, sometimes, I may hear a phrase while I’m out and about or I wake up during the night, start to think of the story, and then have to write it down as I can guarantee I will have forgotten it by the time I wake up! As for the rest of it, it’s a case of staying off social media and drinking lots of coffee. I usually write in the morning as that is when the day is young, and my brain is at its best.

I’m currently working on the sequel to Suspension. It's book 2 of the Time Binder series. I haven’t finalized the title yet but I’m about halfway through now. It’s scheduled for release in Spring 2023 and I’m enjoying writing about it.

I’m also working on something very different which is a novel called Chemo Club. As the name suggests, it’s about Cancer but, although I have had breast cancer myself, it is not a memoir but rather a story of a group of people battling the disease and the people in their lives. I’m in the book as a character and it's loosely based on the doctors, nurses, and patients that I had the honor of meeting on my road to recovery. I’m currently prioritizing Time Binder as I’m on a deadline but immediately after I plan to finish Chemo Club.