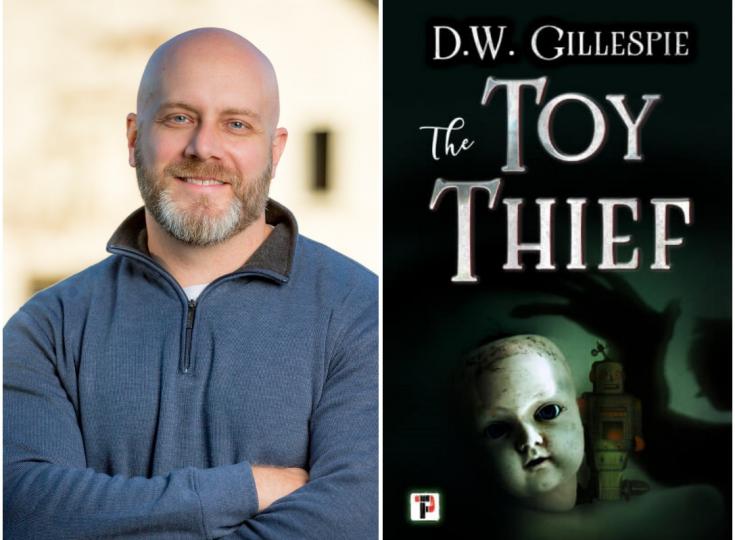 D.W. Gillespie hails from parts unknown in the dark woods of Tennessee. Supported by his wife and two feral children, he spends most days hunkered over a vintage typewriter he found in a smoking crater deep within the forest primeval. Bearded and muttering, he writes tales to terrify by the light of a kerosene lamp. As our Author of the Day, Gillespie tells us all about his book, The Toy Thief.

Please give us a short introduction to what The Toy Thief is about.

The Toy Thief is the story of Jack, a young woman who's remembering the events of her childhood, specifically, the summer where she and her older brother Andy had to deal with a supernatural threat. They discover a creature sneaking into their house to steal toys, but they soon learn that the creature is after something much darker.

What inspired you turn something so innocent as toys as the main focus in a horror novel?

A big part of the idea came from being a dad myself. When my son was about 4, he had a little Batman figure that he carried with him everywhere. More than once, we had to basically turn our house upside down because he couldn't find it. It would always be tucked away in some hidden spot that made me wonder how it ended up there.

Beyond that, there's something special about toys. If you've ever come across some old toys from your childhood, you know what I mean. It just instantly throws you back in time, the same way a song might. That's a really important aspect to the story as well. Not just the supernatural creature or the scares, but the feeling of the things you love sort of just getting away from you in a way you might not even notice.

Readers have compared this book to Stranger Things. Are you a fan of the series?

I hadn't heard that before, but that's definitely a compliment! I can see some of the elements there, especially just the kids dealing with some otherworldly threat. I'm a huge fan of the show. The characters in particular are very well done. I'm looking forward to seeing how they wrap up the series down the road.

Tell us more about Jack. What makes her tick?

I've seen some feedback about people not being able to connect with her, that they find her arrogant or unlikable. Obviously, everyone just has different opinions, but I wouldn't change a thing about her. She's tough and hard-edged, and I can see why some people might be put off by that. But the thing to remember is, so much of her swagger is a show. Deep down, she doesn't really like herself. The trauma she's been through has changed her in ways she's still trying to figure out, right down to the very last page of the book. Hopefully, people can connect with that, even if they don't recognize it in themselves.

Sibling love is a central theme in The Toy Thief. Why did you take this approach?

The relationship between Jack and Andy really is the heart of the book. Anyone that has a close sibling knows the push and pull you can have with each other. That closeness lets them be better than friends and worse than enemies. No one can hurt someone else like a sibling, because they know where to stick the knife to really make it sting. That's Jack and Andy.

There's a lot of me and my brother in the book for sure. We're only 14 months apart, and we used to beat the hell out of each other as kids, but were best friends too. It's just a very singular thing. There's really nothing else like it.

Readers say the book kept them guessing, kept them at the edge of their seats. How did you pull this off?

Well, everything really has been done, so it's all about putting your spin on things. I put a lot of effort trying to give readers something that they're not expecting, especially when it comes to the characters. I hope that readers agree.

In which way is The Toy Thief a "coming of age" story?

Jack is telling about what happened to her as a child, and it really is the story of when she started to leave her childhood behind. It's an extreme case for her, but I think people can relate to the feeling. Most people can remember a moment or span of time when they started to see the world for what it really was, when they started leaving their toys behind so to speak. Jack's story just happens to include a monster!

I definitely write in spurts. I'm not one of those people that has to write every single day. I usually do something writing related daily, but I'm not too regimented unless I'm working on a draft. When I am working on a new novel, I try very hard to stick to my own rule: 10k words a week. Doesn't matter what days or how or when. If I hit the 10k on Thursday or Friday, I take a few days off and start again on Monday. It's a nice pace that works for me.

I have several projects up in the air at the moment. I'm editing a middle grade book about monsters, that I can't wait to talk more about. It's new territory for me, but it's very exciting. I'm also working on the draft of a new horror novel titled The Mill. I also have a few "secret" things that I can't really say much about yet. Hopefully, they'll be more to share on all these projects soon.