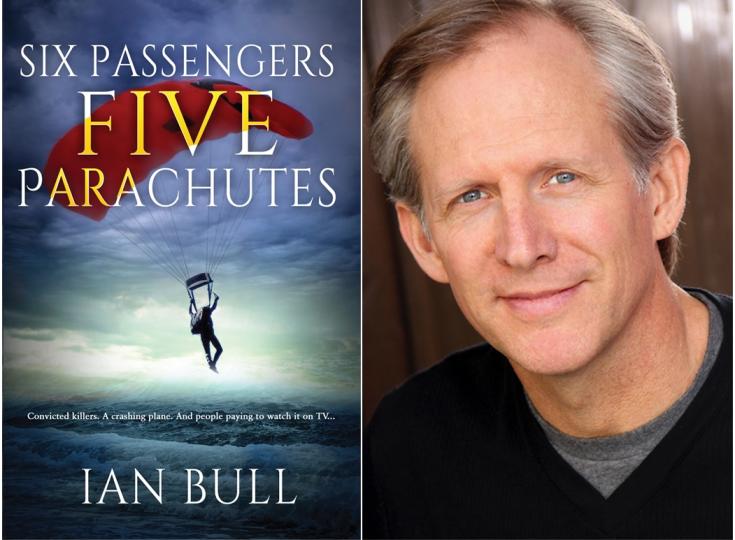 Ian Bull’s books are page-turning, action-packed thrillers that start in Hollywood, spread across California and then careen around the globe. Six Passengers, Five Parachutes is no exception - this global thriller explores the darker side of the TV industry. This book brings a lot of realism and detail thanks to the author's own experience in the industry. As our Author of the Day, Bull tells us more about how his background as a TV editor influences his work, gives us some insights into his book and reveals who his characters are based on.

Please give us a short introduction to what Six Passengers, Five Parachutes is about

Convicted killers trapped on a pilotless plane must fight each other for parachutes before they crash into the ocean…and their battle is being televised to a high-paying audience placing bets on who will survive. Steven Quintana discovers the plot and tries to stop it, but ends up on the plane as the show’s final contestant. Six Passengers, Five Parachutes is the sequel to The Picture Kills.

What inspired you to write about a race from Los Angeles to San Francisco to Hong Kong to Mexico?

I’ve either lived or spent a fair amount of time in all these places, and it’s easier to write what I know. Also, I like global thrillers, especially by Robert Ludlum, and I enjoy how his plots take you on a journey to many places. I aspire to do the same in my thrillers.

Tell us more about Stephen Quintana - what makes him tick?

He doesn’t think he’s good enough. Yet, he’s also excellent at what he does. However, some of his skills and achievements (especially from his military background) don’t translate into “success” in the modern world. I think that’s true for most people. We all flop between feeling inadequate, to feeling that they world should recognize our genius. Many of the skills Steven has — the power of observation, his excellent memory, his skills of deduction — he can’t seem to turn ongoing success and a career. We all have important skills — parenting, working with people, friendship, cooperation — that should “earn us more” and yet they don’t, which doesn’t seem fair. Steven is plagued by all this, like we all are, and it translates into an inner drive that he has to make a difference, or to make his mark on the world. It pushes him into these crazy adventures.

The book is fast-paced and keeps readers at the edge of their seats. How did you pull this off?

My experience as a TV editor helps. That was my day job for many years, and I had to whittle down film and video footage to the tightest, most economical, most direct story I could find in the footage. I am also used to hearing people say, “make it shorter, make it faster, I want it better.” I get paid to get rid my favorite bits, in order to make the story work.

Six Passengers, Five Parachute also explores the dark side of the TV industry.  Why this angle?

It’s the “what if?” premise, taken to the extreme. You may wonder, “are there really people in the film and TV industry who are that craven? Power-hungry? Corrupt? Deviant?” I think the news cycle of the two months proves that the answer is “yes." I remember sitting around with some other editors and writers at lunch one day, trying to come up with titles for the craziest TV shows we could imagine. Six Passengers, Five Parachutes was the title of the craziest game show. I then took that title and wrote the book. 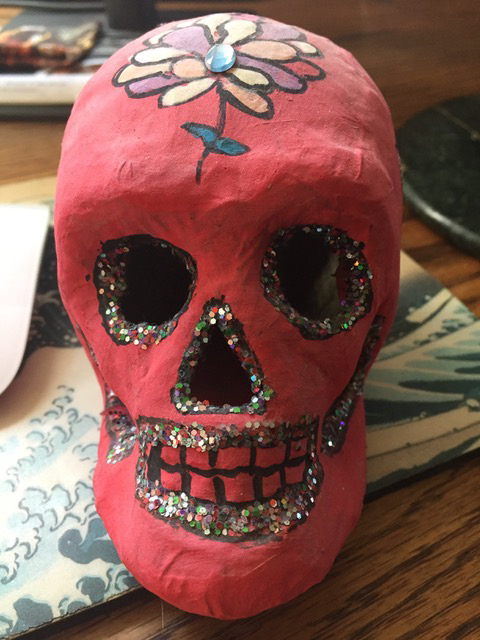 This book is the second in the series. Can they be read as standalones?  Did you plan from the start to make this into a series?

Yes, they can be read as stand-alones. I always wanted to create a character who “lives” outside of his or her books, like Sherlock Holmes, Tarzan, Stephanie Plum, Agent Clarice Starling, Jack Reacher — you remember these characters more than their books. I hope to create one of these eternal characters. It’s a huge challenge! I think writing a trilogy is much easier place to start, but I still have one more to go!

I am a good TV editor. I am also a good TV director and TV producer. I’m a good swimmer, a decent cook, and a decent photographer.

Your characters are well developed and realistic.  Are any of them based on real people?

Yes, ALL my characters are based on real people. Steven is based on me, and so is Julia. I took an on-line test (those are very accurate) and it turns out I’m 30% woman, which amuses Robin, my wife, to no end. Even my villains are based on me ( I have my share of dark thoughts). I also throw in a lot of the behaviors of the people I’ve met over the years, and exaggerate them. I’ve also spent a lot of time alone, in dark editing rooms, staring at footage of people and studying them. That helps too.

I try to write two to three hours a day. I still have a day job producing and editing TV shows, so I don’t have the luxury of writing non-stop for five to eight hours a day. I try to get 20 minutes of writing done first thing in the morning, and then another twenty at my job, before I start my real work day. If I can manage that, I already have 40 minutes under my belt. That keeps the fires lit all day long, so even if I only write 10 minutes at a time, I can manage that eight more times over the remaining hours of the day. That adds up to two hours. Throw in 30 minutes before bed, and that’s 2 1/2 hours. I just have to get that first 20 minutes in. That’s the key for me.

I wrote a tight plot for the first book, The Picture Kills, and then went loose for the second book, Six Passengers, Five Parachutes, and I regretted it. I ended up rewriting that more, until the structure was as solid as the first book. I threw a lot of crazy scenarios into the second book, though, so I did allow myself some flights of fancy. Like when the Peter Heyman’s tribe of misfits force Steven to drink Ayahuasca and then tattoo his face until he looks like a turtle. That was fun.

I like putting my characters into impossible situations, and then force them to find a way out. That’s the most fun. It’s also a plot device that works for me, and it comes in endless variations. Kurosawa did this with his film, “The Hidden Fortress,” which inspired the first Star Wars. I’m climbing Mt. Everest every time I write one of these, so I want to follow the route of the experts who went before me. It’s still going to be a hard slog up to the summit, no matter what.

I am finishing two more novels, outside of the series, which come out before March 2018. One is a romantic thriller called Liars in Love, set in 1980s San Francisco, about two thieves, Sam and Kath, who fall in love but can’t trust one another. Another is a dark thriller called Reality Roadkill, about a struggling filmmaker who takes a job on a reality TV documentary to make ends meet, but his life descends into the dark side. 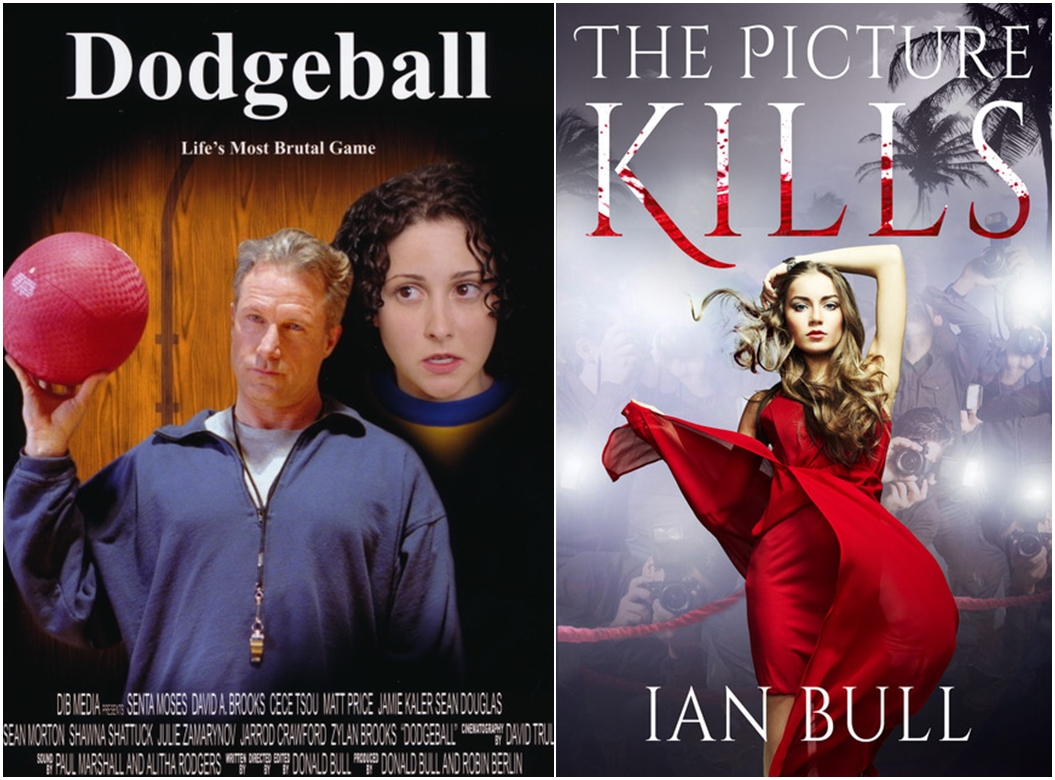 I wrote a blog for several years, called CaliforniaBull, and I’m assembling the best of those into a book. I also found my mother’s old creative writing, and some of it is very good, like her memories of growing up in Canada during World War II. I’m publishing that for her, and it will be called A Hand on My Shoulder. I am also publishing a book of essays on swimming, called Water Markers. These last three will all be freebies. I just want to be a better writer and increase my volume of work. I also want to give a lot of stuff away, to lure you to read more! Then I will write the third book in the trilogy, called The Danger Room. The impossible plot is percolating, and is almost done.

You can reach me at ianbullaut[email protected], and you can also check out my website and blog at ianbullauthor.com, which is the same as californiabull.com. Go there and ask for free copies of my work, including some of my short films and documentaries. Or just email me!

You can also checkout my Instagram feed at  https://www.instagram.com/californiabull/