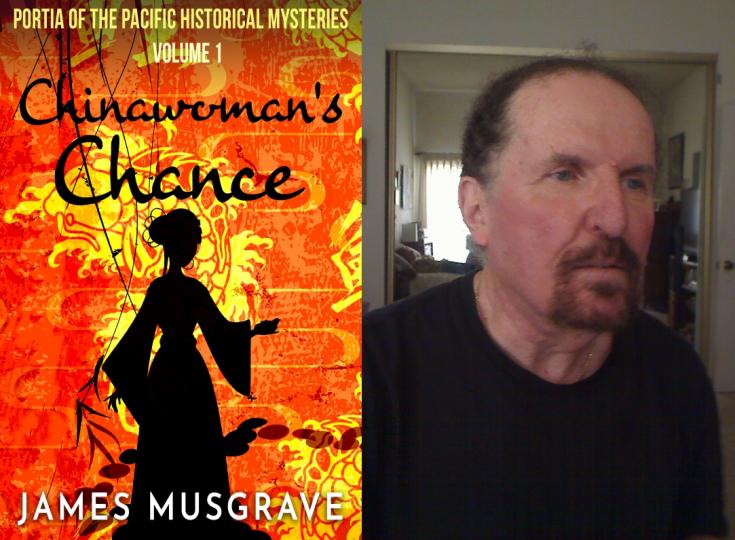 James Musgrave was born in Fall River, Massachusetts. He taught as a Professor of English and worked as a Supervisor, Management Development at Caltech, Pasadena and at various San Diego colleges. He is now the author and publisher at EMRE Publishing, LLC in San Diego. He has won many writing awards, and his mysteries are "featured selections" by the American Library Association. As our Author of the Day, Musgrave tells us all about his latest novel, Chinawoman's Chance.

Please give us a short introduction to what Chinawoman's Chance is about.

Clara Shortridge Foltz, deserted by her Civil War vet husband, must support her five children in San Francisco. As a woman, in a time when men dominated not only the legal profession but also the culture at large, she takes a job from the Six Companies of Chinatown to defend fifteen men who have been rounded up as suspects. A white prostitute has been murdered and flayed inside a bungalow owned by the Chinese, and Clara and her best friend and former Chinatown Madame, Ah Toy, join forces to ferret out the killer. Clara learns how to become a street detective from one of the most experienced men of all, Captain Isaiah Lees, who later becomes her love interest.

What inspired you to write about the Six Companies of Chinatown?

As I was doing my rather intricate research for the series, I realized how hierarchical the system of governance was in Chinatown. The leaders of the community were the men who belonged to the Six Companies. They interacted with the white community in order to be able to run their businesses, such as they were. Many practices were technically illegal, so the Tongs, or gangster element would infiltrate the companies’ infrastructure, either by blackmail or by their ability to protect the more peace loving members. At any rate, it gave me an interesting way to allow my heroine to enter the fray. Although the white men were not paying women, even attorney women, much in the way of legal fees, the Six Companies had the cash to make it worth Clara’s while.

Why 1884 San Francisco? What drew you to this time and place?

Seriously, I wanted a time and place that mirrored today more than any other. The Nineteenth Century in the United States was when the income gap between the rich and poor was very similar to what it is today. In addition, despite their citizenship and voting rights that were earned by blood, sweat and deprivations, women today are still being discriminated against, as the #metoo and other sexual harassments prove. So it was also in the 1800s. I wanted the reader to see those similarities, as well as to enjoy a quick, fascinating mystery.

How much research did this book require from you to make the history ring true?

My critics, including Kirkus Reviews and Forword Indies, say that my main strength as a mystery author is my ability to weave actual history and history’s characters so enjoyably inside a plotline. To do this well, I had to read many articles and books on the historical characters and the real times that they lived in. Not the sterilized and perfected times that mainstream publishers want readers to believe, but the academically sound and actual times that higher education studies in major universities.

Tell us more about Clara Shortridge Foltz. What makes her such an interesting protagonist?

She was one woman, like the woman who began the #metoo campaign. Despite never earning a university law degree herself, she still campaigned for other women, along with her personal friend and legal rival, Laura de Force Gordon (who also appears in my second mystery), and was able to become the first woman appointed to the California State Bar. The laws she had passed in the 1800s gave all women the right to attend law school as well as to work at any job (theoretically) they were capable of performing well in. She overcame obstacles that many women today have to overcome to succeed. Sexism, racism, and even violence, just because she was of the “fairer sex.” She was also able to use her femininity as a way to deceive the all-male courtrooms. She is, in fact, a personal hero of mine, and I hope it shows in my writing.

What other secret skills do you have, aside from writing?

I’m a teacher and a consultant. I write books and articles on how to get our kids “up to snuff” for college entrance and doing the latest research online and work inside those sadly disappearing structures called “libraries.”

The story contains quite a couple of provocative twists. Did you plan them all out before you started writing, or did some of them just "happen" as you were writing?

I am not a planner in fiction. I believe in the “dreamlike flow” of the moment, almost a Zen approach to writing fiction. After all, if I am not surprised, then the reader certainly won’t be, will she?

This book is the first in a series. How does it tie in with the other books in the series?

This is important. Each mystery must stand alone for a good read. However, there are important reasons to lead your characters down different avenues and settings, so it’s wise to consciously remember facts, dates and character details, so the reader won’t say, “What the heck? That’s not right.” What the late but great writing teacher, John Gardner, said was “distracting your reader away from your head movie.” Speaking of “head movies,” in my third mystery, I am gambling with my creativity by including my readers and fans literally inside the plot. More about that later.

I was always amazed at books because there was this person who imagined it all for me, and I wanted to be like that person. The work was there virtually forever, for any reader to enjoy, so the work outlived your chronological reality. What a profession! Now I had to work at it, which separates the beginners from the professionals. My work is finally bearing some tasty fruit.

Honestly, no. I attempt to act with a unique voice with each character, even so-called minor characters. This is also something that separates the beginners from the pros. To complete in today’s increasingly competitive market, authors must learn their craft well and then practice it well.

As I stated, I write “in the dreamlike flow.” Therefore, I love the story’s dream, so the lines tend to blur or are not in the range of my critical mind’s consciousness. I hope the readers will have their favorite lines. They certainly let me know when they don’t like a line.

Do you stick to a working routine?

Yes. At least 500 words a day. The dreamlike zone is what’s difficult to repeat, so an author should keep at it.

I’m working with my “five fan patients” inside the Stockton State Insane Asylum. The year is 1887. A murder has already been committed. We have a private group inside the Portia of the Pacific series Facebook page. These five women won a raffle I conducted after writing five chapters. I came up with the idea of including these fans—by names and personalities--inside my mystery. I was able to use their photos, their “idiosyncrasies,” and their enthusiasm to craft them, on the fly, into important characters (and, yes, suspects) within my third mystery called The Stockton Insane Asylum Murder. I also plan to include more fans in my fourth mystery, The Supreme Court Murder. So, interested readers and future fans (I hope) may visit our FB page at: http://www.facebook.com/portiaofpacific/You may request to become members of our private group called, appropriately enough, Welcome to the Asylum. Answer the brief questions, do what’s requested, and you’re in. We currently have 32 members, and we’d certainly love more! You get to read my work “as it flows” and get to talk with my five characters and ask them and me questions.