Katlynn Brooke - Six Characters on an Epic Quest
Posted on 19th of May, 2019 by Naomi Bolton 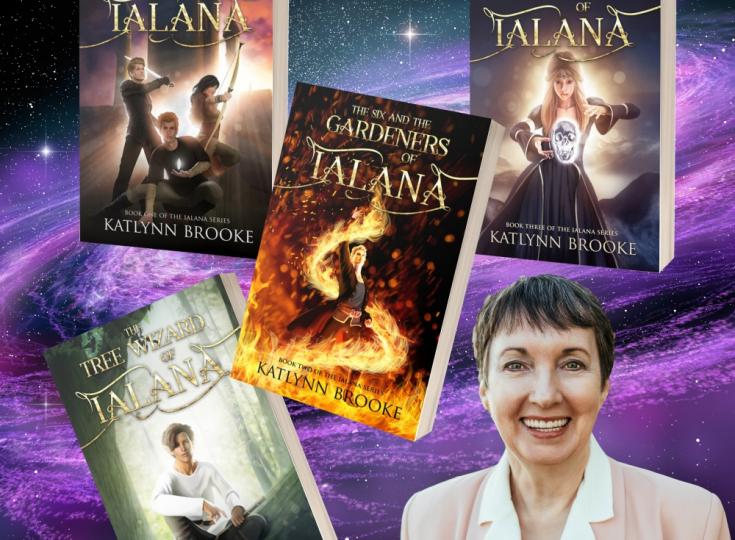 Katlynn Brooke’s formative years growing up in Africa were unusual, even by African standards. As she traveled with her family through the bushveld, she penned plays, poems, and short stories for her family’s entertainment. The seeds of fantasy were planted—seeds that eventually grew into the Ialana Series. Katlynn continued into her adulthood as a gypsy-wanderer, living in exotic countries, always scribbling, before settling permanently in the United States, where she now lives with her husband, and a cat. As our Author of the Day, Brook tells us all about the Ialana series.

Please give us a short introduction to what The Six and the Crystals of Ialana is about.

The Six and the Crystals of Ialana is the foundational book in a—so far—four-book series that introduces us to a motley crew of diverse characters.

Forced to flee their homes, seven youngsters between the ages of fifteen and twenty-one set out on a life-altering quest across a harsh and unforgiving continent.

Conflicted, at odds with each other and guided only by a shared dream, they must discover their mission—to find and reclaim a powerful crystal lost 500 years in the past.

What is their connection to this crystal, or each other? Irusan, a transcendental shape-shifter, may have the answers they seek, but so does Amrafalus, the ruthless Dragon King of Rhiannon.

Betrayed by one of their own, the Six must unearth the shocking secrets buried deep within before they can resume their healing mission. Will they succeed, or are they doomed to fail, once again?

What inspired you to write about six teens who flee their homes?

I am a fan of Tolkien’s The Hobbit and The Lord of the Rings, epic quests featuring multiple characters who flee across a dangerous continent—Middle Earth. Tolkien’s characters must learn to work as a team, they don’t always agree on everything, and there is often a betrayal in the works.

Hobbits were what was still innocent and pure in a corrupt world. All they desired was to lead peaceful and uncomplicated lives, which is why they were entrusted with the Ring of Power.

My six characters find themselves in a similar situation, burdened with a potent healing crystal, one that could be reprogrammed for evil purposes by anyone with the knowledge. Unfortunately, there is just such an individual in their group.

Tell us more about the continent of Ialana

Ialana is a continent that has at least six disparate and distinct climes, or geographical regions.

The far northern region, where my character Kex hails from, is much like Siberia, with tundra, permafrost, and snow.

The Aelfar region, where four of my six main characters live, is similar to the east coast of North America, or central Europe.

The southwestern coast, Ak-Gala, is where Djana, another of the Six lives. It is tropical and warm, its capital the ringed island city of Rhiannon. To the east is Galon, the home of Ortzi the Warlord and foe of Amrafalus, the Dragon King of Rhiannon.

Running down the spine of this enormous continent is the Osgoi: a beautiful but deadly mountain range teaming with the lethal Arrach, a mutant species of scorpion-men, and the terrifying wolf-men, their abode the eastern flanks and forests of the mountains.

The Dalnoor Desert lies to the west of the Osgoi. Here, you will find the Mines of Amrafalus where slave labor produces the metals, gold, and gems for the Dragon King.

The northwest coast is the setting for The Tree Wizard of Ialana, the fourth book in the series. It is a region reminiscent of the Pacific Northwest, mountainous and misty with large forests, inhabited by the Eldred, an ancient race of beings similar to Elves.

Surrounding the continent is the Sea of Alania, where the legendary island of Mu’A is said to exist, but in Book One, no one knows for sure. 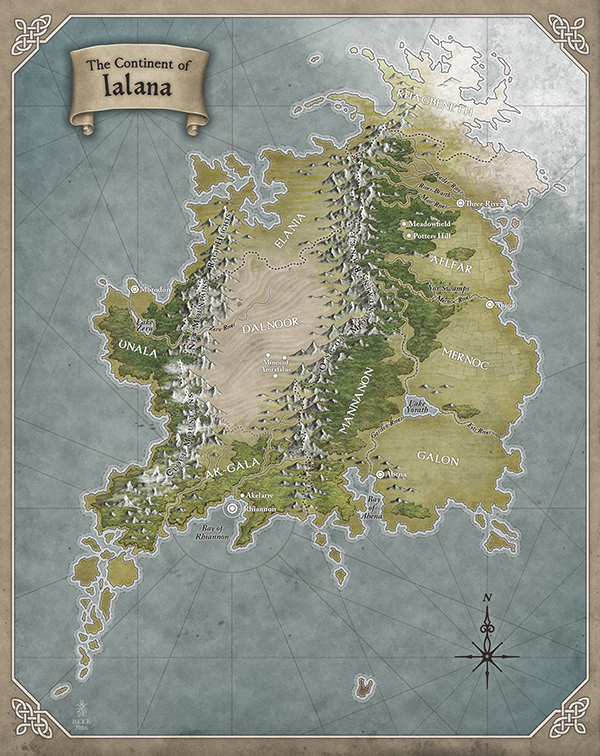 Why did you decide to relaunch this series?

Like many writers, the more I write, the more I improve. I decided once I finished Book Four of the series, I could do much better with the first three books. While the story, characters, and plots have not changed, I tweaked a few things that had always bothered me and re-edited the first three in the series. The fourth was fine as it was, but I felt that the covers in the series needed replacing to reflect my reader target age more effectively.

The third book in the series, Anwyn of Ialana, is now completed and ready for a relaunch— if not already done by the time this interview is published.

How did you go about making each character's magic abilities suit their personality?

I tackled that in Book Two, The Six and the Gardeners of Ialana. In Elemental Command, at least the aspect of it that I have studied, there are five elements—not four: earth, air, water, fire, and ether.

In earth command, Djana is the most obvious choice to reflect her innate skills in divining their location in the tunnels of the Osgoi, and how to find their way in and out of the maze by sensing the consciousness of the rock around her.

Tristan is the most comfortable with the air element. A soldier, he relates to the no-nonsense and directness of Amun, the conscious embodiment of the roaring wind.

Tegan and Jarah are both emotional and sensitive characters, so I felt water would be their element.

In fire command, Kex is the obvious choice: fiery, unafraid, she steps easily into her role, Adain along with her. While Adain, warm and open, is the opposite in personality to Kex, he too faces this formidable element with courage.

Ether commands all other elements; its binding force connects with everything in the universe. It is a creative, uniting force, forming a bridge between the known and the unknown, and it is this element that unites the Six and enables them to use their ‘magical’ merkabas, the spirit vehicle that allows them to travel, invisible, from place to place.

I don’t consider it work. To me, it’s a joy to sit down every day in front of my computer and write. I can’t wait to get up in the morning to begin. I also have gratitude that no one is breathing down my neck, asking when the next book will be ready, and why aren’t I spending more time on marketing? I can do what I like when I like it! However, I do have a great marketing guru who cracks the whip unmercifully, but without her, I could never handle that aspect of writing and publishing.

Creating feeds my soul, and sharing the world in my head with others is probably one of the most satisfying things I’ve ever done.

While I’ve always enjoyed writing, I didn’t publish anything until 2013 when I released my first book, Talk to the Moon, no longer in publication, a novel based in Africa during WW2. I had taken several years to write this book, had no clue what I was doing, and then realized I had hit a wall with historical drama. I asked myself what it was I wanted to write, and of course, it was what I enjoyed reading—young adult fantasy!

I wrote the first book in three months, hence the later desire to rewrite, and the next two followed quickly in succession.

Among the wealth of characters in Crystals of Ialana, who was the most difficult to create?

None of them were difficult to create; they seemed to exist already in my head. Perhaps, if there was any difficulty at all, it was making the six main characters separate and distinct from each other. With so many main characters, there could be no confusion in the mind of the reader. I knew them all well, but conveying the individual aspects of each character could get tricky. I feel I succeeded, and as one reviewer stated after reading the first in the series: “…can't wait to continue this journey with my six friends!” (Levi, Online Book Club).

How do you go about choosing your characters' names?

There are many sites on the internet that specialize in baby names, ethnic names, ancient names, and even fantasy names. I used all of them. I’d test them out for a bit in a passage or two as I wrote, and if they did not ‘feel’ right, I’d return to the appropriate site and find a new one that seemed to fit. There was one instance, though, when I did not use this method for a character. While driving, I noticed a license plate that began with the letters, “KEX.” Voila!

I would love Djana. She embodies common-sense, courage, and strength. She had to dig deep to find these qualities in herself, but she succeeded, and she was an enormous asset to the others in her team.

Kex is a difficult person. Strong-willed, outspoken, and stubborn, I would not want to be her mother. But she too is an asset to the team, and without her, they’d never make their goals.

I do most of my writing in the morning. In my younger years, I was a night-owl, but as I grew older, a good night’s sleep became more important to me. I find my brain now functions at its best before noon. I save the afternoons for errands and other things I’ve been putting off.

I must begin my writing day with at least two cups of tea!

It varies. My first book, Talk to the Moon, took me nearly five years to write. The second (my first fantasy) The Six and the Crystals of Ialana took only three months. Now, I don’t like to rush, and I want to publish a book that has been well-edited with a gorgeous cover. Many thanks to Rebekah of Vivid Covers for her part in this.

Putting out something I am proud of is more important to me than churning out quantity.

I am working on the fifth book in the series. I have a tentative title, “The Knowledge Keeper of Ialana. It is a continuation of the adventures of not only the Six but also their families and children.

Readers may purchase my books here:

I have a Facebook author page where anyone can interact with me and get the latest updates: https://www.facebook.com/katlynnbrookeauthor/

And my website: katlynnbrooke.com where one may sign up for a free download of the prequel novella to the Ialana Series, “The People of the Damned” and receive my newsletter updates, and blog.