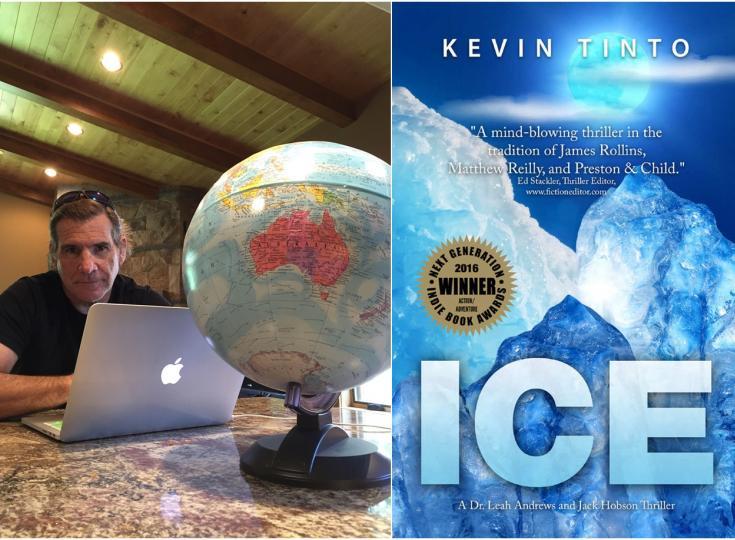 Kevin Tinto is a full-time author residing in Marin County, California. ICE, his first novel is an Amazon Bestseller and Indie mega-bestseller with more than 400,000 sales and 2,600 reviews on Amazon US alone. ICE is a national award winner. 2016 Best Next Generation Indie Books. ICE GENESIS, his second is also a bestseller and his third, ICE REVELATION, is due out March 2020. As our Author of the Day, Tinto tells us all about ICE.

Please give us a short introduction to what ICE is about.

Archaeologist Leah Andrews stumbles upon something inexplicable in southwestern New Mexico: inside a dark cavern lies an undiscovered, Native American cliff dwelling abandoned for 800 years. While twisting through one of the narrow underground passageways, Leah’s flashlight illuminates the remains of a violent massacre.

Ancient human remains—all slaughtered in a long-ago massacre—cover the cavern floor, along with several brilliantly colored, granite crystals. The rare gems are native to only one place on earth: a frozen mountain range in central Antarctica.

Could Native Americans have traveled to the frozen continent of Antarctica 800 years before the first known human exploration? If so, how? And why?

This book has been named the Winner in the Action/Adventure category of the 2016 Next Generation Indie Book Awards. Was the reception anything you expected?

I knew that ICE was a well-written story. I'd been working on the novel on and off for ten years. I had many people (besides my Mom) read ICE in the manuscript stage. The response was overwhelmingly positive.

Publishing ICE as an Indie was a stroke of luck. I bought an iPad and downloaded the Kindle APP. Wow! Suddenly, thousands of books at my fingertips, cheap and even free.

I read a fantastic SCI-FI thriller by A.G Riddle called DEPARTURE. Researching Riddle led me to the fact that he was Indie published. DEPARTURE was his fourth book. The first three a trilogy: THE ATLANTIS TRILOGY. This series, at the time, had about 15,000 Amazon reviews. Only one in a hundred or one-hundred and fifty readers will write a review; it was easy to figure out he'd sold well over a million books in the Atlantis Series alone.

Gerry's sales are now past six million copies, E-book, paperback, and hardcover. I sent him an email, and he told me step by step, how to publish ICE Indie and how to PROMOTE, using tools like MANY BOOKS. I'm still (a little) behind Riddle with around five-hundred thousand sold books for ICE and the second in the series ICE GENESIS.

That was not the end of the story for DEPARTURE! After selling a million Kindle copies as an Indie publication, Gerry sold the rights to Harper-Collins for a small fortune and the film rights to 20th Century Fox.

What inspired you to write about an undiscovered Native American cliff dwelling abandoned for 800 years?

I spent two years living in New Mexico. Anytime I visited the Cliff Dwellings, I came away with the same question. Why did these tribes, who lived happily on the mesa tops and riverbanks for thousands of years, suddenly force themselves into these cramped and perilous cliffs? This existence lasted less than two hundred years before they returned to the mesa once again. 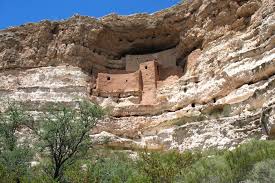 Why did you pick rare granite crystals for this story?

It was critical to establish that what Dr. Leah Andrews found within this ‘dwelling’ was impossible. The crystals also offer clues and play a crucial role throughout the story in ways the reader could never guess.

The book also includes romantic elements. Why did you take this approach?

Is there anything that creates more tension than a marriage that has gone sideways? In the case of Dr. Leah Andrews and mountain climber guide extraordinaire, Jack Hobson, they have legitimate reasons (in their own minds) why they are not living together. In their case, fiction follows reality.

The amount of money paid to guides for Everest has skyrocketed. Now, your bank account is a qualifier, not your climbing resume. Leah knew full well what Jack did for a living, but now he’s guiding in her opinion, uniquified climbers. If some of the high dollar clients sit down on Everest and can’t climb down, he is dead—and so is Jack, because Jack would never, ever leave a client on the mountain to die alone.

“I know you, Jackson. Your billionaire client, Al Paulson, has no business on Everest. When he sits down, you’ll stay with him. Meanwhile, I’m here in New Mexico, planning your funeral each and every time you leave for a mountain climb. I can’t do it, and I won’t.”

Jack thinks this is unfair. “Leah, you know what I do for a living. This is not new. Anyone can die on Everest at any time.”

Meanwhile, both of these stubborn souls are miserable without each other. After the discovery in the dwellings, Leah needs Jack, and in an ironic twist, she will need Al Paulson as well.

Readers often comment on the realism they experience while reading ICE. That’s because I’ve been around the block once or twice. Most of what happens in ICE, I have experienced. I lived in New Mexico and played amateur archeologist for a couple of years while working for a company called Chesebrough-Ponds. I’m an experienced mountain climber, a licensed pilot, Level 2 PSIA private Ski Instructor, SCUBA wreck, and open water diver and on and on. 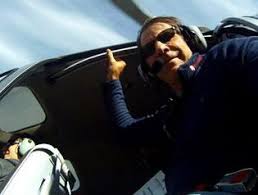 How did you go about describing the different settings in the book?

I use my own experience, or, I immerse myself in a setting through Google and YouTube. Writing is about bringing three or more dimensions to a two-dimensional page; conveying all those gems you learned in writing class is essential to creating a scene that pops. At some point, when you don’t have a solid foundation, let’s say something that borders on SC-Fi, then I depend upon irrefutable laws of physics to build my world. I never wing it—ever. I have a saying printed upfront of all my books: “It’s all true! Except where it’s not!”

As the author, my characters are all a blend of my life experience. That said, once fully formed in my mind, they take on their own personality, needs, and desires. When that conflicts with the storyline, then I have to give in the character and allow them to make their own decisions, for better or worse. A perfect example would be Jack Hobson. I (might) need Jack to get into a helicopter and fly across the Hindu Kush, to connect with the next part of the story. Well, Jack, as it turns out, has been in several helicopter crashes during his career as a climber. In one particular wreck, he was the sole survivor. Jack might be a risk-taker, but he’s not an idiot.

“There’s no way I’m getting in that junk helicopter than hasn’t been touched by a mechanic since the late ’60s. Thanks, but no thanks. Give me two horses and supplies, and I’ll meet you at the agreed GPS coordinates in 48 hours.”

Of course, Jack runs into an unfriendly tribe of Uzbek who have him pinned down in a canyon under a hail of automatic gunfire. Whist trying to figure a way out of his predicament, he utters, “Why the hell didn’t I just on that damn helo?”

I find them all easy to write, although some characters have a better sense of humor than others. Sometimes I’m typing away on dialogue and suddenly I have to laugh out loud at what Leah just said. Leah, in some ways, is not likable in the first part of ICE.

Given that she has a few lessons to learn, I allowed her to dictate some of her actions and dialogue that perhaps in another world, I might have moderated. For the reader, that makes those ‘life lessons’ so much sweeter with that level of contrast.

Should this ever be turned into a movie, which actors would you imagine playing the lead?

Two perfect characters would have been Brad Pitt as Jack Hobson and Angelina Jolie.

I write for myself. I write based upon what makes me laugh, takes me to the end of the planet, and makes me interact with a plethora of oddball characters all under tremendous pressure to either survive or accomplish an impossible goal. 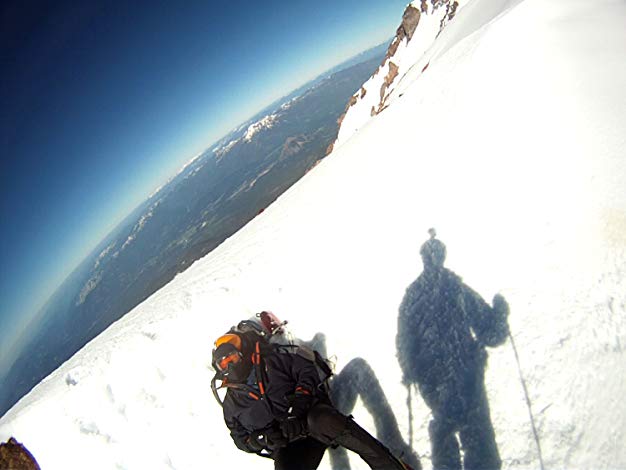 I write twice a day, seven days a week. Early morning for two hours, then late afternoon for the same. My readers waiting for ICE REVELATION will argue with that. “What is taking so long for REVELATION? I NEED the end of the story!”