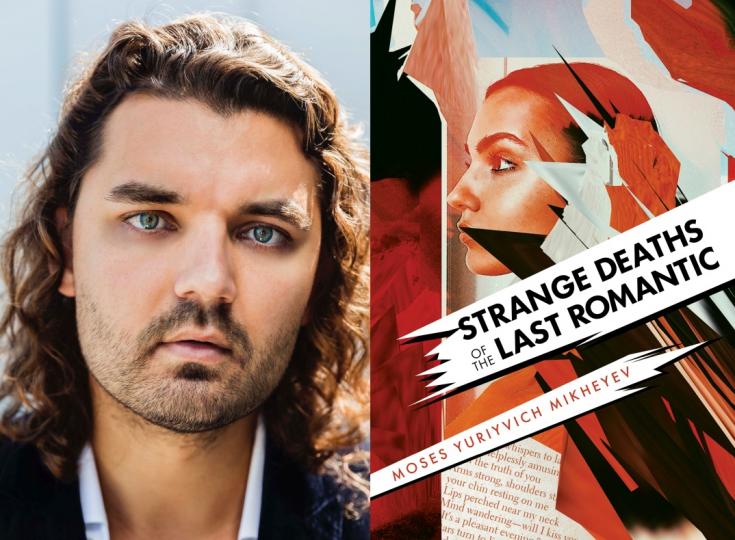 Moses Yuriyvich Mikheyev is a Russian-American novelist who studied theology and philosophy at Whitworth University before obtaining his graduate degree in theological studies from Emory University. He is the author of 'The Hack' and 'Strange Deaths of the Last Romantic.' His third novel 'Bodies: A Romantic Bloodbath' will be released Spring 2021. He is also a folk-rock musician. He lives and loves in Los Angeles. As our Author of the Day, he tells us all about his latest book, Strange Deaths of the Last Romantic.

Please give us a short introduction to what Strange Deaths of the Last Romantic is about.

Strange Deaths is about a young man who kills himself and rematerializes elsewhere. As he ages, he realizes that he has a superpower of sorts, one that others are interested in harnessing. After one such shooting and rematerialization, he finds himself in the arms of a beautiful girl. The two fall in love, and that’s when things really get interesting. I won’t say any more, since I don’t want to reveal any spoilers. At it’s base, the novel is a young adult romantic thriller with science fiction and fantasy elements.

What inspired you to write about someone who cannot die?

Initially, I set out to write a modern day “realist romance” (something like The Great Gatsby). But I have a tendency to turn every mundane tale into something far more interesting and sinister. So, I couldn’t complete the book. I ended up starting over after I had completed almost 50,000 of that original “realist romance” idea. The original idea was to end the novel on a romantic suicide. And, for whatever reason, I couldn’t get my novel to work. At least not in the way I wanted. One night, I woke up and had the answer: the main character shoots himself but doesn’t die. That’s when I knew I had a different story. So, I went back to the drawing board and rewrote the entire thing, salvaging only the romantic elements from the original novel.

Tell us more about Adam. What makes him tick?

He’s a young adult. He’s seventeen to maybe twenty-one in the novel (I leave it a bit vague). A good portion of it takes place in college. Adam is a self-described “romantic.” He falls in love for irrational reasons and elevates his loves by placing them on pedestals. He’s an idealist at heart. However, that doesn’t stop him from understanding that people can be evil. I mean, the novel is a thriller and there is certainly plenty of violence. For me, Adam is an average adolescent in the sense that young people are full of eternal hope and don’t see the world through jaded eyes.

What makes Lilyanne so special?

Lilyanne is a sheltered girl who is charming and innocent and doesn’t really believe in evil. She’s a bit naïve when it comes to the ways of the world. I think Adam and Lilyanne make the perfect adolescent couple: they are dumb, beautiful, and full of stupid courage. They demand that love give them the eternal. And they don’t rest until they get it.

You studied theology and philosophy. How has this influenced your writing?

A lot. Theology and philosophy help people like me ask “the big questions.”

Does God exist? What is happiness? What is human flourishing? Why do we suffer? How do we love? What is good and what is evil? What is the meaning of life? How do we deal with suicide, loss, suffering, depression in a seemingly chaotic and meaningless world?

These are the types of questions I spent years addressing; first as an undergraduate at Whitworth University, and later as a graduate student at Emory University. I think my characters are, as a result, entirely different than what you would encounter in, say, a Stephen King novel or a Stephanie Meyer novel. It’s probably why reviewers repeatedly say things like “unique,” “original,” or “strange” about my work. The philosopher in me hopes someone finds the easter eggs hidden in my novels. There are many of them.

I used to be in a Christian rock band back when I was an undergraduate. We released an album (that I will not mention by name here because of how awful it is) and fell apart shortly thereafter. I still make music on the side, mostly in the folk-rock genre, but I no longer aspire to be a rockstar. I don’t like the stage and I don’t like the attention.

Why dark comedy. What drew you to the genre?

In a dark world, full of inevitable suffering, where it appears that only “the fittest survive,” one has to come to terms with death and despair. And I think the best way to do that is to laugh in the face of death. There’s no point in being depressed about how unfair all of it is (and life is anything but fair). So, my characters laugh. They don’t laugh because it’s the best time of their lives; they laugh because, if they don’t, the moment will soon be over and there’ll be nothing after that. I think comedy is what gets us through the hard times. You don’t want to surround yourself with depressing people. The world is cruel and dark enough. The only thing I can do is add humor to it and help alleviate some of the suffering. At least that’s the hope.

My sister is an artist who goes by the name SINSOFASAINT. Her work can be found mostly on VSCO. She designed the cover with a professional cover designer. They teamed up and that was the result. 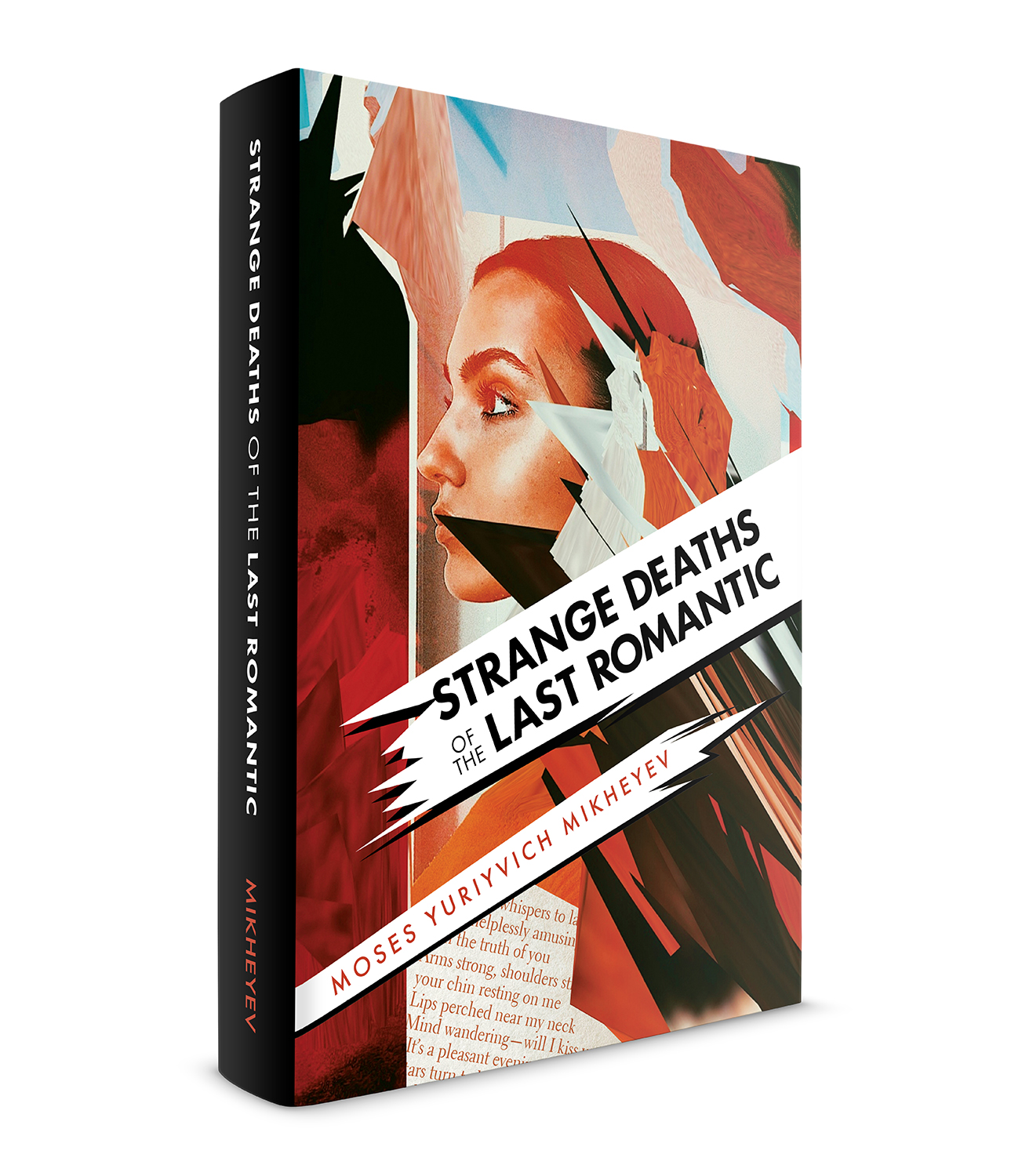 I don’t ever plan a novel. I just write. If I write something that contradicts what I had written earlier, I go back and edit it. So, yes, all of my characters go on tangents and do whatever they like. I just let the novel take me wherever. I rarely know what the hell I’m writing. In fact, even I don’t know.

“Nobody knows anything.” William Goldman said that, and he was right. I don’t know shit. You don’t know shit. None of us know shit. That’s why we should just enjoy the little time we have here and have ourselves some dark comedy.

“Nobody knows anything.” People say all kinds of things. They’ll say, “Oh, make this scene more romantic.” Or: “This character needs to be more like this and less like that.” You listen to any of them and you’ll realize nobody knows anything. The people who told you to change a scene love the change. And now the people who loved that very scene hate the change. You have to pick your battles. Don’t really listen to people. Do your own thing and your audience will find you.

Do you have any interesting writing habits. What is an average writing day like for you?

I like to write 1-2 hours a day. Usually, that translates to 2,000 words. But I’ve been lazy as of late and have not been writing for 6 months now. I guess I’m taking a break. Or maybe my career is already over. Either way, I don’t know. Nobody does. Because…

I have been writing an epic novel called American Emperor. But I have since abandoned the project. I almost finished another novel called American Gulag, but I abandoned that one too. I have an unfinished children’s book that is in the fantasy genre called A Gentleman From Outer Space. I wrote several chapters of it and decided to finish it once I had kids. I would like it to be a good children’s book. And I don’t think I’m ready to write that at the moment. I have a screenplay that I will likely be converting into novel form possibly next year (all depends on my mood). It’s about a girl that lives on a different planet who falls in love with a boy on earth. It’s called Set Torch To Titan. It was supposed to be a movie, but the film studios didn’t want to produce it. I don’t blame them. It would only work as a big-budget film. Go big or go home. I guess I was sent home. So there’s that.

I’m on Amazon and on Goodreads. I guess if someone wanted to reach me they’d find a way.