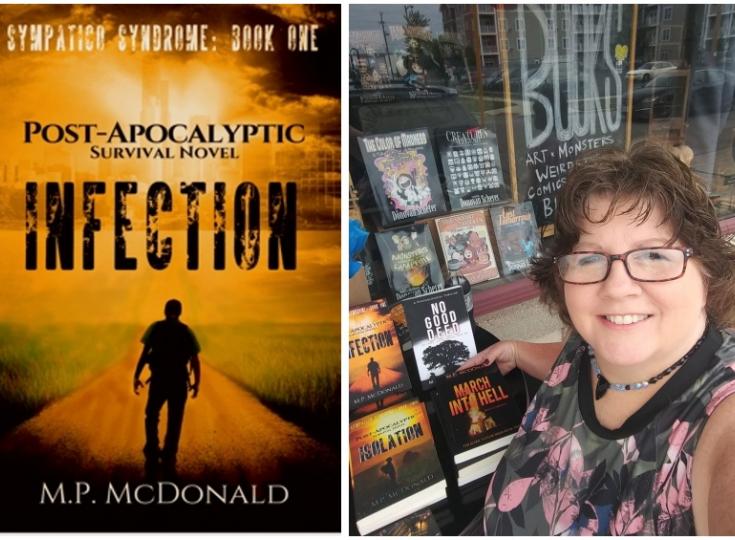 M.P. McDonald is the author of thrillers with a psychic twist and a reluctant hero, and post-apocalyptic fiction centered around saving family. During the day she works as a respiratory therapist, where her first-hand experience with treating those with life-threatening illnesses and injuries gives her stories a realistic touch. Her cat, Tigerheart, a strict taskmaster, keeps one paw resting (restraining?) on her shoulder to ensure the writing gets done in a timely fashion. Allowing only a few breaks, but only if M.P. shares her chips. When not writing, M.P. can usually be found with her nose buried in a book, swimming in the pool if it's not too cold (but since she lives in SE Wisconsin, it's too cold most of the time!), or hanging out with family. As our Author of the Day, she tells us all about her book, Infection.

Please give us a short introduction to what Infection is about.

Infection is about a pandemic where approximately 95% of the world’s population dies. Cole Evans is an epidemiologist but had retired from that career not long after working with Ebola victims in Africa. He lives in a moderately sized town in Wisconsin, not far from his brother’s family. He’s a widower with one son, Hunter. Hunter is away at college as the book opens.

The book is about Cole doing everything he can to keep his family safe from the virus, but things are made even more difficult when his brother balks at uprooting his family to flee to an isolated island.

I became a fan of post-apocalyptic books after reading One Second After by William Forstchen. Since I work in healthcare, I wanted to create a pandemic instead of something like an EMP or asteroid.

As a side note, I’m a respiratory therapist at my day job and COVID has really been an eye opener about how people really behave during a pandemic. In Infection, Cole is always harping about wearing masks and gloves but there’s one time he doesn’t follow his own advice. I have been called out for that a few times because he’s supposed to know better. Keep in mind, this was written 5 years ago and the people who have commented negatively about his choice may have thought that nobody would ever go against safety rules. We know differently now. I guess COVID has proven that at times, we all let down our guard, some more than others. I felt Cole reasoned through the risks and thought them acceptable. Others didn’t feel that way.

Tell us more about Cole Evans. What makes him tick?

Cole is all about trying to be a good father. His wife died when Hunter was very young and he’s raised him alone, juggling his career and fatherhood. As a consequence of his job, Hunter spent a lot of time at Cole’s brother’s house and Cole feels guilt that he couldn’t give his son the happy family life that Hunter’s cousins enjoyed.

Why did you pick a virus that causes euphoria as the reason for your apocalypse?

Oh! Great question! I’d read a few years before writing Infection that the parasite that causes toxoplasmosis affects the brains of primates, making them less afraid of felines. They did studies where chimps were put into enclosures next to big felines like tigers and lions. Those who’d been infected at some point with toxoplasmosis were more likely to go near the fence separating them from the cats. They would bang on it or throw things at the animals. Those never infected shied away from the fence, rarely trying to draw attention to themselves. The theory was that those not afraid of big cats would be easier to catch, then eaten, achieving the parasites’ goal of getting itself inside the cat, where it would multiply and spread.

So…I thought, what if I created a virus that made people want to socialize? It would also be airborne, and the combination would allow it to spread very, very quickly. I wrote Infection in 2016, so COVID-19 wasn’t around then, but it has been kind of crazy seeing how COVID has spread by those who are infected but not symptomatic yet. It’s not quite the same, but pretty darn close.

Well, if this was 20 years ago, I’d say I have a really good throwing arm and used to help coach my son’s baseball team. I taught several boys how to throw and they went on to be all-stars in our league as pitchers or catchers. Also, I’m pretty decent at basketball, beating many guys at games of HORSE. Now, I mostly just swim and play Super MarioCart with my grandson. One day, I may even beat him at it! (he’s 7, so I better improve quickly or it’ll be hopeless.)

Readers say your characters feel real and relatable - how did you pull this off?

I guess I just put myself into the character’s shoes and try to figure out how it would feel to have those things going on. I also pay attention to body language in movies and real life, trying to capture those little movements to lend authenticity to the dialogue. It’s easier with movies or tv shows than real life though, as I can watch the movie over and over to really see what the actor is doing and figure out how to describe it in a way that reader’s will recognize almost subconsciously.

Oh, definitely. Cole has more of a temper than I expected and I wasn’t expecting the friction between Cole and Hunter at times. Cole is used to be the dad and what he says goes, but Hunter is just hitting adulthood in an extremely trying time and he’s grown up a lot faster than he might have. Sean, Cole’s brother, has everything Cole ever wanted, ie, the perfect family, but Sean sees Cole as the smart, successful brother, while he’s worked blue collar jobs, so that causes some tension I didn’t expect either.

People have compared your writing to that of Stephen King and William Forstchen. Who are some of your favorite authors in the genre?

Besides those two biggies, I enjoy Lou Cadle, another indie author. Her Gray series is wonderful. While I’m writing post-apocalyptic, I tend to avoid reading them. I compare myself unfavorably to the other authors and then it’s hard to get motivated to write. Right now, I’m reading lots of historical WWII fiction.

What is your favorite scene from the book and why?

There’s one scene from Sean’s point of view early in the book. I loved the dynamic between him and Cole. I wanted to do more from his point of view but could never find a good spot for it, so there’s only the one scene.

Also, there was a very tough scene to write later in the book that dredges up all kinds of universal fears, I think. I can’t say more without giving it away.

What was your greatest challenge when writing Infection?

Survival skills! I know I got some things wrong and tried to improve with each book in the series, but I in a real post-apocalyptic scenario, I’d die in the first wave. As much as I researched, there are things that I don’t know that I don’t know, so it’s hard to research something you aren’t even aware needs to be researched.

I don’t do in depth outlines but I do jot down major idea/plot points down in a notebook. I then set it aside. I might look at it later as I’m writing but often when I get to the end of the book, I’ve forgotten what I put in the notebook, so it’s gratifying to go back and look and see that I mostly hit all the points.

I have a hard time writing by myself. Meaning, I do better when I’m writing in sprints with other writers. I also do better when I have a deadline so I create one now with pre-orders. I’m a procrastinator at heart so I need that external motivation.

I’m in the early stages of the third book of my companion series to Sympatico Syndrome Series. The companion series involves the same virus and is even close to the same location, but all new characters and situations. I figured there would be more than one survival story to tell from the virus. The first book in that series is called Alone at the End of the World.

I’m also working on a new genre, contemporary fiction, under a different penname, Patricia McDonald. It’s Christmas-themed but I’m working in some the real-life pandemic aftermath. It’s called Christmas Wishes. This is the first time I’ve even mentioned it to anyone except my family and my writing buddy.

I’m most active on my Facebook author page, https://www.facebook.com/MPMcDonaldAuthor, and to find out about more of my books, check out my website at www.mpmcdonald.com