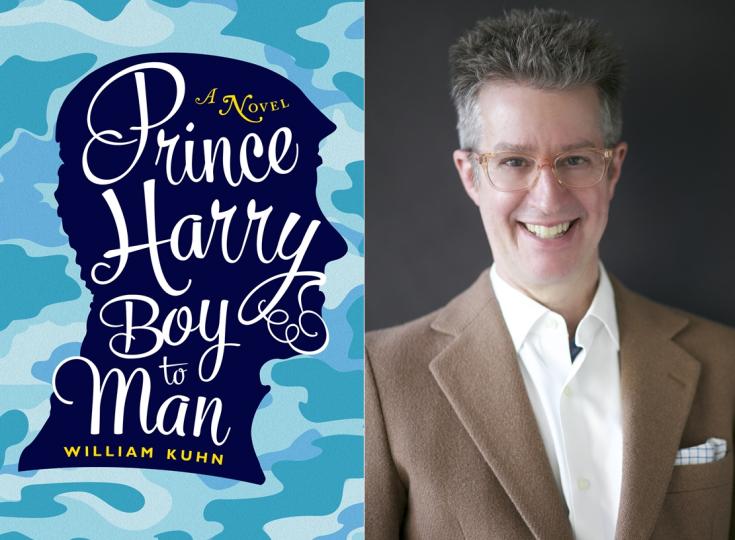 William Kuhn can spot a men’s Harris tweed or a women’s Chanel suit in a vintage clothing store at twenty paces. He is also pretty good at exploring the human side of celebrities and bringing their characters to life in very believable fiction. As our Author of the Day, Kuhn talks about his book, Prince Harry Boy to Man, the role of the British Monarchy in modern society and his writing habits.

Please give us a short introduction to what Prince Harry Boy to Man is about.

The British army deploys a spoiled young man to Afghanistan.  He encounters challenges, both serious and comic, unlike anything he’s ever met with before.  He has to learn, as we all do, how to be a leader, a lover and a friend in a place where there’s not much margin for error.

What inspired you to write a story with Prince Harry as your main character?

I saw a production of Shakespeare’s two Henry IV plays.  I was surprised to find how much Shakespeare’s Prince Hal resembles the modern Prince Harry.  Isn’t it great when someone from today suddenly illuminates a Renaissance text?  Imagine a playwright writing a character four centuries ago that is still vividly familiar to us today.

How much has your interest in history and politics influenced your writing?

A lot.  I couldn’t have written this book without writing non-fiction on the history of the British monarchy.  Living for long periods in Britain, seeing how British people think and act, comparing their politics to ours, also helped.

How much research did you for this story to get prince Harry's personality right?

I read several Harry biographies.  I watched videos of him on YouTube.  I met  some people who were at his school in the same era that he was.  I talked to some former students of my own who experienced deployments similar to his.  I read two books by British travelers who spent a lot of time living with ordinary Afghans.  I also read a report by the British Foreign Office that gave a rationale for why they sent troops there and what they hoped to accomplish.  I looked at pictures of him when he was in his early 20s.  Then I tried to forget all that and let my imagination go.

For some of the earlier non-fiction I wrote on the British monarchy I spent time working in the Royal Archives in Windsor Castle.  I went to a Christmas party in Buckingham Palace where Harry’s mother was there.  She had on a long red dress, red satin shoes with a block heel and she looked stunning.

Give us three good to know facts about you.

I went to graduate seminars at Johns Hopkins at the same time the current president of Afghanistan, Ashraf Ghani, was on the faculty of the anthropology department there.  He had nothing to do with this book, however.  He certainly wouldn’t remember the quiet kid I was, sitting in the back row.  I guess he’s got better things to do than to read it.

I live in an 1860s brownstone in Boston.  The kitchen is in a closet.  There’s no washer or dryer.  I’m (probably foolishly) ready to give up convenience for age and style.

Besides writing, what other cool secret skills do you have?

I can spot a men’s Harris tweed or a women’s Chanel suit in a vintage clothing store at twenty paces.

How, would you say you have evolved creatively as an author since you published your very first book?

I’ve learned to relax.  My first books were all works of history designed to please and to be verified by other historians.  Since then I’ve learned that intangibles like color, atmosphere and the way people speak all matter as much in conveying the past as getting the footnotes right.

Do you think the British monarchy still has a place in our modern society?

Yes I do.  For example, Diana allayed worldwide fears about physical contact with people suffering from AIDS.  Harry’s work on behalf of wounded soldiers has also been terrific.  It’s a job I wouldn’t want to do.  The media likes to make you think it’s all about castles, pretty clothes and sleeping in satin sheets.  The reality is that the pressure is unrelenting.  The privacy is nil.  You also have to have a firm sense of your own insignificance so your personality is not ruined by the flattery.

Why did you decide to include Harry's former nanny as a character in the story?

The book is also fast-paced, with a lot of action and thrills. Why did you take this approach?

He’s a young guy in his early twenties.  Guys that age like action and thrills.  They take risks.  They think they’re invulnerable.  They’re not.

If you could meet with any person, dead or alive, who would it be and what would you talk about?

I’d like to talk to Jacqueline Kennedy Onassis about her publishing career.  I’d also like to know what it’s like when, overnight, an ordinary person becomes a myth.

Do you have any interesting writing habits? Favorite writing spot, best time of the day to write etc.?

I work most mornings at the Boston Athenaeum.  It’s a beautiful 1807 private library.  Anyone can join.  Here’s a picture of my desk this morning.

The boyhood of Lord Byron, before he became mad, bad and dangerous to know.

My last two books Reading Jackie:  Her Autobiography in Books and Mrs Queen Takes the Train are available in most libraries, bookstores and online.  There’s a contact page on my website williamkuhn.com.  I love it when people check in with me on Twitter @Kuhnwilliam or Facebook @WilliamKuhnAuthor.