Anting-Anting Stories
And other Strange Tales of the Filipinos 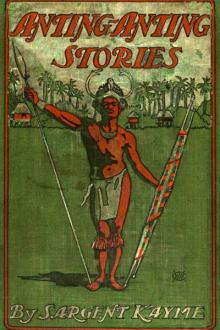 Anting-Anting Stories
And other Strange Tales of the Filipinos

Pirates, half naked natives, pearls, man-apes, towering volcanoes about whose summits clouds and unearthly traditions float together, strange animals and birds, and stranger men, pythons, bejuco ropes stained with human blood, feathering palm trees now fanned by soft breezes and now crushed to the ground by tornadoes;—on no mimic stage was ever a more [VI]wonderful scene set for such a company of actors. That the truly remarkable stories written by Sargent Kayme do not exaggerate the realities of this strange life can be easily seen by any one who has read the letters from press correspondents, our soldiers, or the more formal books of travel.

"That is Mt. Togonda," he answered, pointing to the hills before them, "and this," swinging his hand around the plateau on which the camp's tents were pitched, "is La Plaza del Carabaos."

The captain's eyes met those of Lieutenant Smith.

As if with one thought the two men turned and looked out to sea. The sun had set. Against the glowing western sky a huge rock at the plateau's farthest limit was outlined. Rough-carved as the rock had been by the chisel of nature, the likeness to a water buffalo's head was striking. Beyond the rock three islands lay in a line upon the sunset-lighted water. Far out from the foot of the cliff the two men could hear the waves beating upon the sand.

"This is an excellent place for a camp," the captain said when he turned to his men again. "I think we shall find it best to stay here for some time."

Perhaps a month of respite from attack had made the sentries careless; perhap

Lisa Carr
4
Stories, set in the Philippines around the Spanish-American War. They are interesting because they are the first stories I've found dealing with that era. They are a bit like Kipling (though nowhere near as well written) in that they deal with civilized men running up against natives.

An anting-anting is a charm or talisman. Not all of the stories deal with them. I found the jumping around in time distracting. An American expedition against the Tagalogs comes before stories of the Spanish rule of the islands, though it happened later in time.

I found myself wanting more detailed descriptions of almost everything. Some of the stories had so little place description that they might as well have been set in Tulsa.

The stories themselves were interesting, but nothing remarkable, with one exception. The Fifteenth Wife was horrifying.
11/05/2013

rws
4
It's less a horror story collection, rather anecdotes of the way some Filipinos lived around 1900, with some snapshots from the Philippine Insurrection against the Americans. The stories tell much about the naive naturalist thinking of most of the people and are well written.
08/03/2008