The Life and Adventures of Nat Love 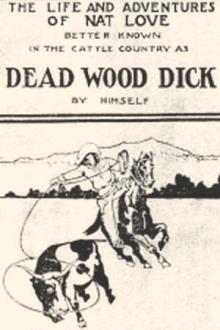 A true history of slavery days, life on thegreat cattle ranges and on the plainsof the "wild and woolly" West,based on facts, and personalexperiences of the author.

reedom of its people.

Some of the slaves, like us, had kind and indulgent masters. These were lucky indeed, as their lot was somewhat improved over their less fortunate brothers, but even their lot was the same as that of the horse or cow of the present day. They were never allowed to get anything in the nature of education, as smart negroes were not in much demand at that time, and the reason was too apparent, education meant the death of the institution of slavery in this country, and so the slave owners took good care that their slaves got none of it.

Go and see the play of "Uncle Tom's Cabin," and you will see the black man's life as I saw it when a child. And Harriett Beecher Stowe, the black man's Saviour, well deserves the sacred shrine she holds, along with the great Lincoln, in the black man's heart.

WAR. "THE REBELS AND YANKEES." I RAISE A REGIMENT TO FIGHT. DI