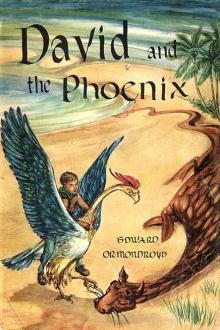 A tale of adventure and friendship between a young boy and a Phoenix-- a tale that begins with the boy's education in the ways of the mythological world and ends with the Phoenix's rebirth.

napping sound from below, and David's foot was released. He unstuck the snag from his shirt, pushed his way out of the thicket, and sat down weakly on the grass. Whew! At least the bird was not going to harm him. It seemed to be quite a kindly creature, really. He had just frightened it and made it angry by bursting out of the bushes so suddenly.

He heard a flailing in the thicket, followed by the bird's anxious voice: "Hello! Are you still there?"

There were more sounds of struggle. "This is rather awkward. I--the fact is, I am afraid, that I am stuck myself. Could you--"

"Yes, of course," said David. He smiled to himself, a little shakily, and re-entered the thicket. When he had disentangled the bird, the two of them sat down on the grass and looked at each other. They hesitated, not quite sure how to begin.

"I trust," said the bird at last, "that you are not of a scientific turn of mind?"

"I don't know," said David. "I'm interested in things, if that

Eileenj Flight
5
I was in 4th grade when Mrs.Sarrinen read David and the Phoenix to the class.
That was the first time I ever cried over a story.
This is an amazing story of friendship and trust. A book like this should never be out of print.
09/13/2016

Fred Brockman
5
I read this book in the 3rd grade and loved it. It has stayed in the recesses of my mind for more than 50 years. Tonight I googled it and am here. Always wanted to find more books that explored the world of fantasy creatures. Suppose Frank Baum\'s other Oz books might have fit into this, e.g., Tick-Tock (Tic-Toc?), but never was around an extended library of them. Suspect the Harry Potter books & movies resurrected this largely dormant interest. After recently visiting Universal\'s The Wizarding World of HP in Orlando spent time wondering why some old geezer would buy a wand and still enjoy it a month later. JK Rowling\'s books grew in a field that at least for me was originally tilled by Edward Ormondroyd. A heartfelt thank you to him for adding a little more texture and nuance to my life.
11/01/2012

Keri
4
I'd never read this before, it is a delightful book. Well worth reading for the young or the young at heart!

Its the story of a boy who moves to a new home, and when exploring finds an unique friend. If you know the story of the phoenix, then the end is a little obvious but well written.

I just didn't believe that any parents would be that accepting of things - LOL, but it wasn't THAT important to the story.