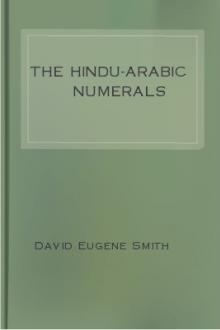 So familiar are we with the numerals that bear the misleading name of Arabic, and so extensive is their use in Europe and the Americas, that it is difficult for us to realize that their general acceptance in the transactions of commerce is a matter of only the last four centuries, and that they are unknown to a very large part of the human race to-day.

and astrology were translated into Arabic, notably the Sindhind (Siddh[=a]nta). Concerning the meaning and spelling of this name there is considerable diversity of opinion. Colebrooke[24] first pointed out the connection between Siddh[=a]nta and Sindhind. He ascribes to the word the meaning "the revolving ages."[25] Similar designations are collected by Sédillot,[26] who inclined to the Greek origin of the sciences commonly attributed to the Hindus.[27] Casiri,[28] citing the T[=a]r[=i]kh al-[h.]okam[=a] or Chronicles of the Learned,[29] refers to the work {9} as the Sindum-Indum with the meaning "perpetuum æternumque." The reference[30] in this ancient Arabic work to Al-Khow[=a]razm[=i] is worthy of note.

This Sindhind is the book, says Mas`[=u]d[=i],[31] which gives all that the Hindus know of the spheres, the stars, arithmetic,[32] and the other branches of science. He mentions also Al-Khow[=a]razm[=i] and [H.]abas

The Teaching of Geometry