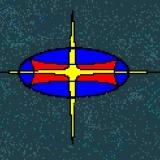 Half Around Pluto
3
3 survivors of a crash on Pluto attempt to make it back to Base Camp, halfway around the planet. But will there be any point to the trip, assuming they can make it? Will there be supplies waiting for them?

A short, psychological drama about survival and the reasons for surviving. I think it could have been fleshed out a little more, but as short as it is, it's an easy read.
11/08/2019

The Hour of the Dragon
4
While Howard wrote several Conan stories, this was the only full-length novel of Conan that he wrote. It's later in Conan's career, when he has been the king of Aquilonia, and takes advantage of the character's past history to fill out and inform parts of the story. It's also interesting to see how different parts of Hyborian society react to the barbarian king. But mostly, it's more of Howard's rip-roaring action with a health dose of intrigue and magic involved. A lot of fun!

The Widow Lerouge
3
A fairly enjoyable and readable mystery, but not perfect. First of all, while this is described as being a Monsieur Lecoq story, it really isn't. Lecoq makes a brief appearance, but the real detectives are Magistrate Daburon, and a M. Tabaret. And Tabaret is rather an eccentric detective, while Daburon is a more plodding type thrown into a personal drama by the case.

As a detective story, it starts out with quite a bang. The murder is discovered, and the police start straightaway into investigating. M. Tabaret is called in (by LeCoq) and performs some nice deductive work about the crime and the murderer, similar to, but pre-dating Sherlock Holmes' deductive reasoning.

And then, a couple of Incredible Coincidences show up, one relating to Tabaret, and another relating to Daburon, and the book seems to turn into a romance or even a psychological drama, with little further detective work occurring. It's still interesting reading, but simply of a different kind.

Nonetheless, there is a surprising twist to the murder and murderer, and the astute reader might well guess the twist, buried as it is in the romantic drama, although evidence for it only turns up near the end of the novel.

All in all, a fairly readable and enjoyable story, but a bit slight on the detective front, in spite of its strong opening.
08/26/2017
Sign up