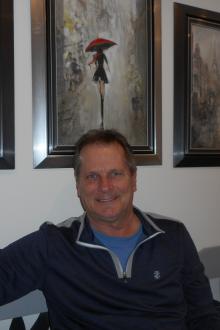 Travis Casey
Travis Casey, reformed bad boy, now author. The son of an American minister, Young Travis took to mischief at an early age. By the time he was 19, he had met many of Fort Wayne's finest (the men in blue) in their professional capacity. Indiana was quickly losing its appeal for an adventurous young man such as Travis. It was time to give up the threat of iron bars for the reality of steel ships.

The reputation of an American sailor had allure. One could even say the Navy had a tolerance for socially unacceptable behavior. Perhaps even encouraged it. Yes, heavy drinking, smoking, and women in every port were condoned as a normal and accepted way of life. Not wanting to rock the boat, Travis conformed.

Then, during his tour in the South Pacific, he met his tamer-to-be. After a whirlwind romance, he settled down and has since given up the wild ways — well, acts more socially acceptable. He and his wife Wendy settled on the south coast of England in 1992. Travis began writing humor and travel articles in 2006 before turning his attention to novels.