A. R. Shaw - The Human Condition During Perilous Times

A. R. Shaw - The Human Condition During Perilous Times
Posted on 12th of April, 2020 by Naomi Bolton 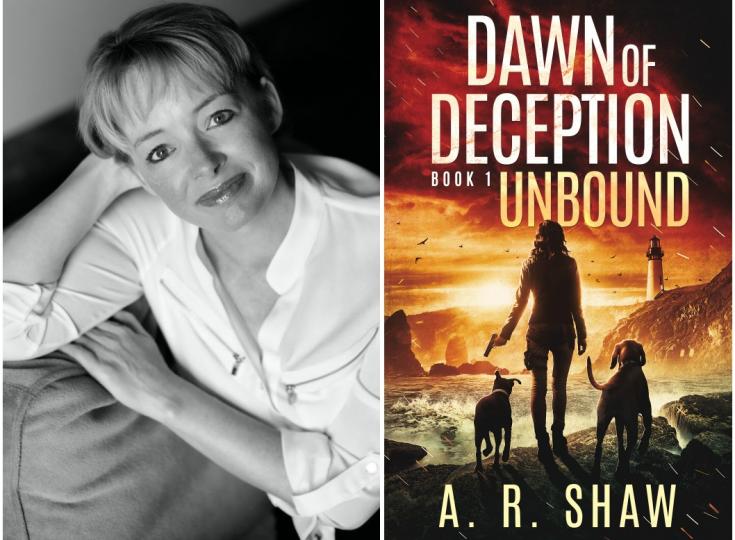 A. R. Shaw is a USA Today Bestselling Author. She's published over 14 books and counting. She served in the United States Air Force Reserves as a Communications Radio Operator and then attended college as a mother of four. She’s always written in what little off time she could manage but didn’t start publishing her works until the fall of 2013. Now when she isn’t writing or spending time with family, she enjoys hiking in the Pacific Northwest where she lives with her loyal tabby cats, Henry & Hazel in a house full of books. As our Author of the Day, Shaw tells us about her book, Unbound.

Please give us a short introduction to what Unbound is about.

The first book in the Dawn of Deception series is about a mother finding herself abandoned in a neighborhood after an apocalypse, left alone to defend her two daughters with nothing more than her whit and a pack of abandoned dogs.

What inspired you to write about a woman who has to keep her daughters safe in an apocalyptic dawn?

I’ve always been interested in the human condition during perilous times. What keeps us going and enables our survival from one person to the next. We, humans, are varied in our responses to danger. Some will act while others accept defeat at a moment’s notice. I’ve also noticed that in history some of the most unlikely of heroes were surprised by their own stamina in survival situations. Sloane is one of those who in the worst of times will act and do anything to protect her children even in the face of her own death.

When it comes to apocalyptic fiction, we often see father figures in a situation like this. How does a mother handle the situation differently?

I think women are aware of some of their own natural disadvantages like strength but that makes us more creative. We’re honestly more adaptable in our thinking when it comes to challenging situations. Like Sloane’s use of the stray animals she encounters. There’s more than one way to handle safety.

Why did you add a pack of abandoned dogs to the mix?

As I researched past natural disasters, as well as a few man-made ones, the constant thread that comes up is the abandonment of the family dog. It doesn’t take them long to revert to their natural habitat which is to form packs. Though they do want a family and will bond to anyone willing to feed them. Sloane saw this as an asset and she was right to take on that challenge. It was a mutually beneficial solution.

Tell us more about Sloane Delaney. What makes her so special?

I’ve written many characters and the thing about Sloane is that she doesn’t know, like most humans, what she’s capable of until she’s presented with these challenges. She was a grieving and abused wife. That’s not exactly the pillar of character strength you would find in a protagonist, but in spite of that, she was abruptly presented with a turning point. She could have succumbed to the challenges but then she surprised herself and met them with a strength she didn’t know she possessed.

You have served in the United States Air Force Reserves. How have your real-life experiences influenced your writing?

I find it interesting that most writers, I’ve been told, write themselves into their stories. I’ve never done that. I’d love to be Clarisse from Graham’s Resolution or Sloane from Dawn of Deception; both women I admire. I could not put up with Maeve’s whininess from Surrender the Sun or Dane Talbot’s revengeful streak from Remember the Ruin. If there is one character from my writing that is closest to my personality, it’s Macy from Graham’s Resolution. However, my real-life experiences are varied and I certainly draw from them as a mother, soldier, wife, ex-wife, daughter, etc. More so, I observe society and these characters form themselves as my fingers touch the keyboard. They come to life on their own…flaws, strengths and all.

Well…I’m not a bad cook. I like to hike, snowshoe, and travel.

In this book, a tsunami adds to the disaster. Why did you take this approach?

This was an interesting project. So, Dawn of Deception was originally a novella commissioned by Kindle Worlds in Steven Konkoly’s Perseid Collapse series. When Amazon ended that program, we were all given back the rights to our novellas. I then expanded the first book but kept the initial catalyst for the apocalypse.

Readers say this book was hard to put down. How did you pull this off?

I’m not sure. I get that a lot even from readers who are not readers. They seem to like the way I write. I find that a great honor and I’m certainly willing to keep them busy reading.

What is your personal favorite line in this book? Please explain why.

“The displaced seawater had receded from the first floor, leaving an indelible layer of thick, brown, chocolate pudding-like sludge along the painted sandstone walls and Italian tiled flooring. The wayward sea currently hid at a lazy standstill below in the basement like a freeloading relative, getting stinkier by the day. It wasn’t done with them yet. The basement was full of it, only having ebbed an inch since the day before.”

I’m not usually a descriptive writer. I leave that to the other guys. I prefer to only write what readers actually read but when this formed itself on my digital paper…I thought, dang, I kind of like that. I’ll leave it in.

The cover. I’m hard on cover artists, admittedly. I’m usually determined about one or two things and it takes a while to get what I’m looking for. I’m not a graphic artist but I do know a decent cover when I see one. I work in communication but it’s a challenge to describe what you’re after when it comes to covers. Damonza was the cover company I used for this latest rendition of the series. At first, I didn’t realize this was going to be a three-book series. They usually give you 3-5 mock-ups and I liked the way it turned out after several back and forths. I’m not sure they’ll want to deal with me again, lol.

I always have something brewing in the back of my mind and it takes months, perhaps years before the story begins to find its mark on a screen. Another author said it well, Karl Marlantes, from Matterhorn said, “These ideas are like those old high school dishwashers we remember. When one crate of steaming plates pop up, you dare yourself to touch them. It’s a challenge and then you remove the whole tray to put them away, steam burning your hands in the process. Then the second stray pops up from beneath the first and you tell yourself…let that one cool a while. Take care of this one first.” It’s like that for me as well. I’m constantly telling the new and completely different story in the back of my mind…not just yet. Let me finish this one first.

At the moment, I’m writing the sixth book in the Graham’s Resolution series. And the first book, my debut novel, was titled The China Pandemic. So you can imagine my last few months. It’s about a flu pandemic that takes over the world. The sixth book in this series is about the next generation and their challenges. It’s interesting writing this while something, less so, but similar is happening in the world today.

Readers can find me and my work on TheChinaPandemic.com.