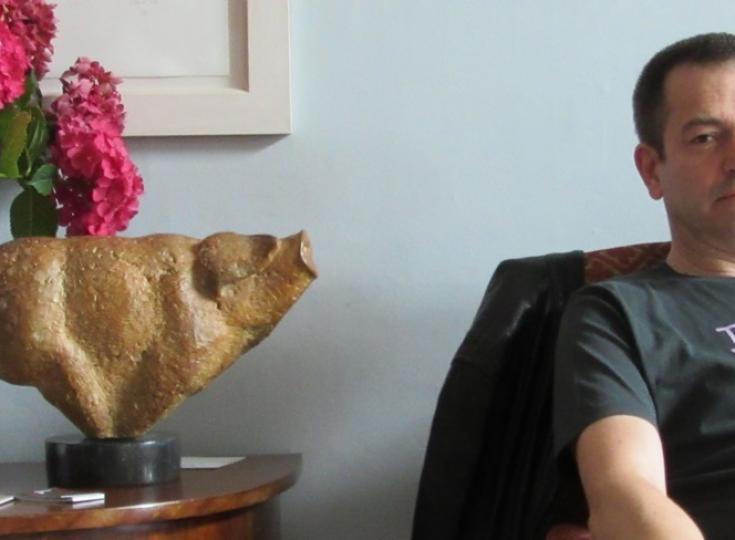 When Alexander McNabb stopped smoking, he had to find something constructive to do with his hands - so he started writing. His debut novel Olives - A Violent Romance, sparked a lot of controversy in the Middle East because of his use of common family names and because it contained themes such as drinking alcohol, sex before marriage etc. So he followed it with Beirut, in which there’s booze aplenty, sex, gambling, murder, violence and general mayhem. As our Author of the Day, McNabb chats about his love for the Middle East, why his books always deal with politics, democratic values and religion and reveals what music he listens to while writing.

Please give us a short introduction to what Beirut is about.

It’s pretty nuts, really: a full-on testosterone-soaked international spy thriller about a maverick Northern Irish spy working for European intelligence who’s trying to trace two hooky cold war-era nuclear warheads that the future President of Lebanon is trying to smuggle across Europe into the Middle East. It’s sexy like Beirut, up and down like Beirut, dirty and brilliant, desperate and corpulent, corrupt and beautiful like Beirut. It’s all these things. And more!

I gave up smoking. I was on 60 a day and the instant transition to zero was insane; I had to find something publicly acceptable to do with my hands and so I wrote a book, oddly enough a spoof of testosterone-soaked international spy thrillers, called Space. It was very widely rejected indeed, so I started writing serious books. I dusted it down a year or so ago and it made me laugh so much I put it up on Amazon for $0.99. Its first review said, ‘This book isn’t funny’.

Beirut is very fast-paced. What are some tricks you use to keep readers at the edge of their seats?

I don’t use tricks so much as go with the flow of the story and let the action carry the thing along. I think pacing is important – if it was all madcap chasing around, the poor reader would get exhausted, so it’s about keeping things engaging while not letting the pace meander around. Generally, people seem to find things bob along quite nicely. I took a little more time in the next book, Shemlan, which is perhaps a little more nuanced. Beirut’s in a rush to go somewhere and doesn’t mind letting you know that. The paperback tends to bully other books on the shelf at night. I’ve had complaints.

You have been a journalist, editor and publisher in the Middle East. How have these experiences shaped your writing?

Oh, immensely. The people you meet, places you find are frequently unique and intense enough to remain imprinted firmly on your mind. The Middle East is such a place of contrasts, of spies and dictators, good guys and bad guys and everything in between. I’ve travelled around the region now for some 30 years, from the souks of Aleppo and Amman to the sinks of Cairo and the glittering boulevards of the Gulf. I’ve spent countless days and nights wandering around Beirut itself, a city I love, taking in the Ottoman buildings and fragrant autumn hillsides of the Chouf and Bekaa. I’ve given hours to wandering along the luxuriant corniche where the Mediterranean washes up against sighing palm trees and arseholes in glittering Mercedes convertibles honk their horns at pretty girls who smile back...

Tell us more about Michel Freij and Gerald Lynch. Why do they make such great adversaries?

They’re born enemies. Freij is the son of a Lebanese warlord, a terrible old man who used to scratch out death warrants on vellum parchment sitting at an Indian clerk’s desk in an act of theatrical faux-humility. Freij is a billionaire and the future president of Lebanon, his political career buoyed by the commercial empire he’s built based on the old man’s misdeeds. Lynch is a Belfast guttersnipe, brought up on the Falls Road during the troubles, and who has a problem with authority. He’s all over the place where Freij is planned and meticulous. Lynch hates Freij and all he stands for and Freij thinks Lynch so far beneath him it’s almost a joke. Lynch has devils while Freij is the devil. It’s a dance to the death.

The book takes place in Lebanon, Hamburg, Prague, Malta, Albania, the Greek Islands and much more. How did you manage to describe all those locations so vividly?

A lot of travelling helps. There’s a mixture of experiences and influences in there, so for instance Beirut is a city I have been travelling to since the 1990s while I’ve only been to Prague once, but that’s enough to ‘evoke’ Prague. You often only want brush strokes – the reader fills in the rest. Some locations in the book I’ve never been to, but you can usually paint between the numbers with a little guesswork and research. I’ve never been to the eponymously dry Greek island of Anhydrous, for instance, but I once spent a glorious week swilling retsina in nearby Alonissos. The 50-metre luxury yacht in the book is, oddly enough, real and berthed in Dubai. A friend arranged blueprints and so on - I just changed its name. Perhaps worryingly, the nuclear warheads in the book are also very real indeed.

Beirut followed your very controversial "Olives - A Violent Romance." What has the experience been like with the release of this book, as opposed to Olives?

Olives, which was set in Jordan, caused widespread controversy in the Middle East because of my use of common family names which are considered ‘tribal’, but also because of things like Muslims drinking alcohol, sex before marriage and so on. So I followed it with Beirut, in which there’s booze aplenty, sex, gambling, murder, violence, heroin, prostitutes, bombs, widespread carnage, nuclear warheads, out of control vicious militia, political corruption, special forces, cruise missile strikes and general mayhem. And nobody has batted an eyelid. I do so love the Arab World…

Your books often explore topics such as politics, democratic values and religion. Why do you find these topics important to write about?

They’re three subjects you can’t avoid in the Arab World and influence pretty much everything that’s happening in the region. Western governments and their intelligence agencies often end up being the ‘baddies’ in my books, which some people find hard to swallow, but if you want to take a look out at the world from a viewpoint in Beirut, Damascus or Amman, you’d be hard pressed to find any joy being imported to the region from the West.

The sectarianism of Lebanon and that of Northern Ireland are something our friend Gerald Lynch in Beirut appreciates like a gourmand. The way both places have put their conflicts behind them, yet the heat remains under the white ashes, appeals to him as, indeed, it does to me. It’s a theme I returned to with A Decent Bomber, which is set in Northern Ireland and is about a long-retired IRA man who’s forced to return to his old profession of making very, very big bombs.

I’m very influenced by music and dreams when I’m writing. I couldn’t write a car chase unless I had some mad death metal or Ministry, Rammstein, perhaps System of a Down on the go. The last scenes of Shemlan were written to the divine, sparse and achingly sad music of Estonian composer Arvo Pärt’s Fur Alina, while the end of Olives was torn out of Secret Garden’s Sleepsong, a piece of music born of love and loss I still find it hard to listen to even now. Dreams are a really big deal for me, they are how I resolve issues, find inspiration and sometimes I even wake finding whole books laid out in my head.

I don’t think I’d ever want to be another author, but I’d like to have met some of them and had a chat. John Fowles and The Magus. I’d love to sit down with him at sunset over a glass of cold Chablis and have a relaxed ‘What the HELL were you thinking about there, chap?’ conversation. Lawrence Durrell. I’d really have appreciated the chance to try and understand how such a selfish, brutal bastard wrote something as enduringly brilliant as the Alexandria Quartet.

What was your greatest challenge in writing Beirut?

My developmental editor making structural changes that made me tear the whole edifice down and rebuild it, room by room. That was hard.

The champagne, however, was just fun. A few years back, we went on a glorious week’s holiday around the Champagne region of France with friends, glugging for all we were worth until we had all become champagne bores with livers the size of Texas. We discovered a gorgeous single estate champagne called Lamiable, a really good extra brut – which is something, if you know your champagne, that’s hard to pull off with brio. And Lamiable does just that. So I used it to kill someone in Beirut, because that’s what you do, right? I buy it from the sole UK importer, still, a nice chap called Charles. I told Charles I used his prized pet pop to snuff a geezer in my book. So he, like a true ratfink, went off and read Beirut and then shared the relevant passages with the family who run the Lamiable Estate. They were – to say the least - somewhat disconcerted to find their beloved champagne turned into a murder weapon in a novel. This tickled me greatly.

I published twisted psychological thriller Birdkill last year and then wrote a kids’ book as a Christmas present for my niece, which was fascinating fun. Right now I’m taking a wee break and playing around with a few new project ideas in the way a cat plays with a cockroach. I’m in no hurry, to be honest.