Alexander Skikos - An Engaging Journey Through a Grim but Interesting Future

Alexander Skikos - An Engaging Journey Through a Grim but Interesting Future
Posted on 21st of October, 2021 by Naomi Bolton 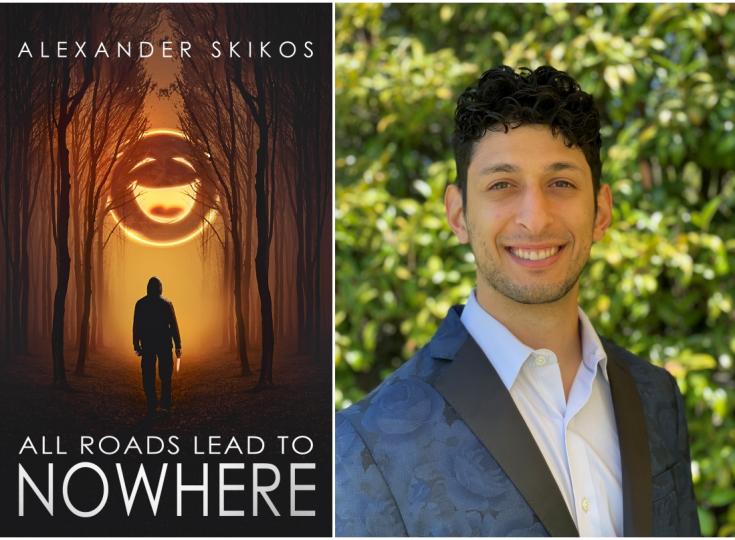 While studying political science and communications at Santa Clara University, Alex Skikos became fascinated with Americans’ different points of view from the far left to the extreme right, and the polarization of our society as the result. Creating a novel based on how he perceives the schism of such widespread and opposing divisions will one day play out, All Roads Lead to Nowhere points to a terrible future for not just the United States, but the entire planet. Most people see the world in a black-and-white, us versus them mentality. Skikos reminds us that we are more alike than different and that the world is mostly shades of grey. But our failure to understand this may lead to our demise.

Please give us a short introduction to what All Roads Lead to Nowhere is about.

All Roads Lead to Nowhere is a post-apocalyptic political fiction novel that follows six narrators as they are pushed to the edge by each other and their environment. Set in the year 2064, the story finds humanity at polar extremes, the logical endpoint of the increasingly divided us versus them battles that currently dominate politics and media in 2021. The setting of the book is the culmination of global poisoning and the impact of extreme weather shifts coupled with human extremism: the dehumanization of the “them” that is the forefront of thought and dialogues in politics and media today. The purpose of the book is to depict a possible near future for mankind on Earth.

I had a great teacher in high school who taught science fiction. Like everyone else in 2016, I was saturated with political discussion, and I started to wonder about our future. I was witnessing cliques being formed in my school based on political beliefs and the hysteria building as the media basically told us every day about how we are doomed. I submitted the first draft of All Roads Lead to Nowhere to the teacher. He said it was awful, but he also said that I had potential. He told me the one thing my story lacked was a purpose, a reason for someone to read it. Throughout college, I studied the relations between media and politics and the history of how media was used for political advantage. Studying the relationship between media and politics and living through the political strife during those four years, I was able to create a world that reflected what I believe will occur if we continue to use media as a weapon for political gain rather than the honest middleman between government and citizen it was designed to be.

I picked 2064 as the backdrop for this story to give sufficient time for the world’s climate to collapse and the polarization of wealth to develop into two different human societies. It is widely assumed that our environment will irreversibly change for the worse somewhere around 2050. That is also when the North Pole will more significantly melt away, leading to areas such as Louisiana and some parts of Florida to be underwater. By giving a 14-year gap between the irreversible end of the world as we know it and the setting of my novel, it would allow for nations’ “apocalyptic plans” to come to fruition. For example, Russia is a major contributor to global warming. Their Ministry of Energy is focused on bringing about climate change because of the major benefits it will have for Russia. While major farming states such as California and Iowa will be too hot to grow food, Russia will have the climate of a modern-day California, meaning that the majority of the country, which is covered in permafrost (a fancy word for ancient ice), will be turned into farm land and used to grow low yield crops that Russia will sell to the rest of the world. So by picking 2064, I give enough time for a system like this to be implemented and become the norm for the world.

Tell us more about the wasteland called Nowhere - what inspired its creation?

Most of the big symbols in my book, such as Nowhere and the G.L.E. laughing moon, came to me in dreams. For Nowhere, it was a weird dream in which I was alone the entire time. It was just me, walking through a flat gray world. I saw this bright purple object lighting up the night sky. I walked toward it until I saw it was a city surrounded by a giant wall. Loud music swept through the night, the flashing lights of the city changing the color surrounding gray my world. Above the city was a moon laughing at me as I tried to break into the city. So, I sat down with my back against the wall and just listened to the city and watched as the moon laughed. I has this dream when I was around 7 or 8, but it was something that stuck with me. When I was trying to come up with a setting for this book, one that had purpose and meaning, I thought of this dream and decided to run with it. The dream was a good metaphor for the growing wealth gap that’s plaguing the U.S. As the middle class continues to shrink, the lower and upper class grow, but not equally. It is much easier for someone to become poor than rich, so as the rich get richer, the poor grow in numbers. That is why the Paradise Cities are walled off from the world with a gate that will never be opened. You can leave Paradise, but you will never get back in. 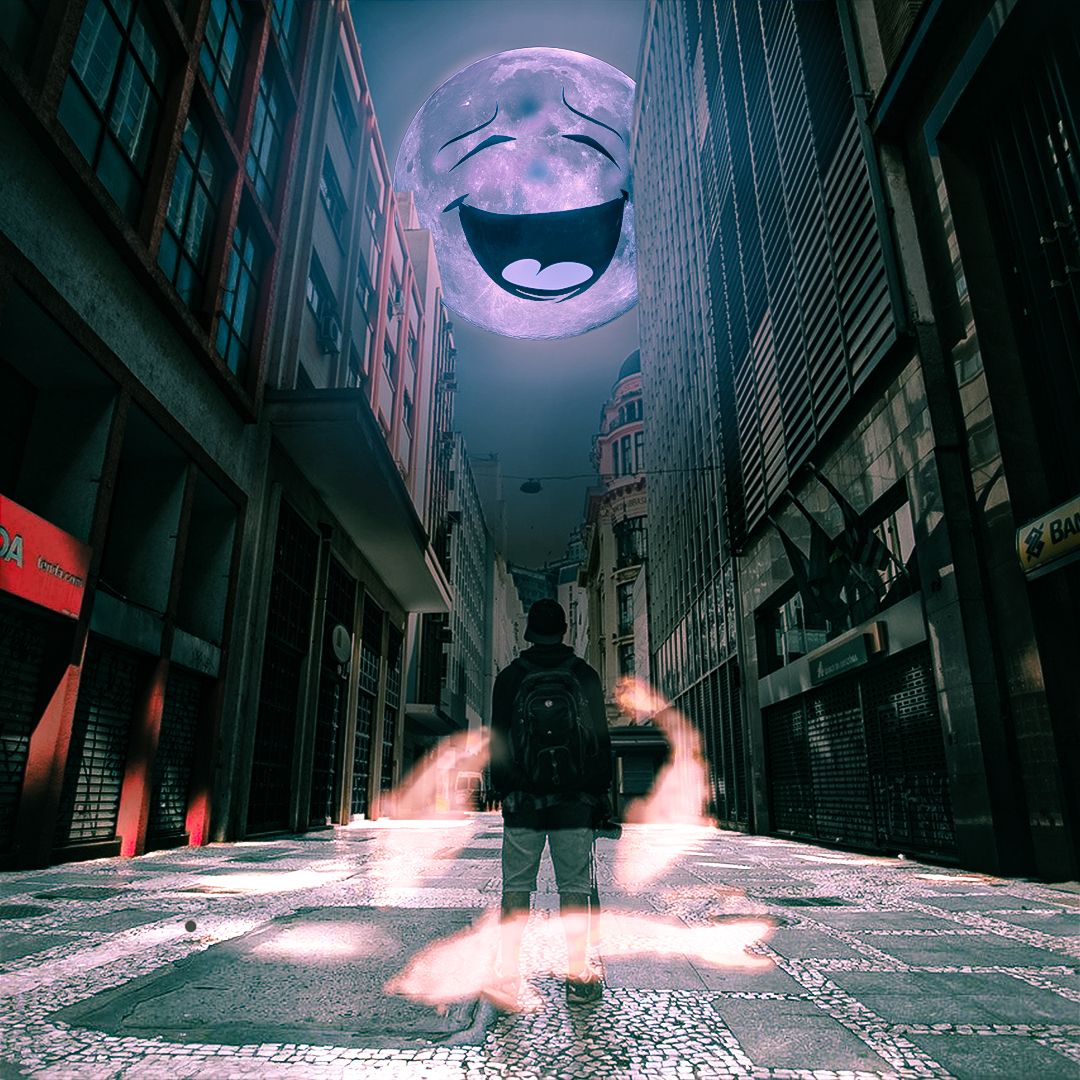 The most challenging characters for me to write were Mark and Janet. These two are the least like me personality wise. Mark is angry, constantly trying to prove himself as a real man. Janet is very similar: finding scape goats for the problems of the world, angry that these people exist (such as Levi), and selfish with a false sense of heroism. These two characters are the extremes of our society.

Bartending. I make a mean Paloma. I use a special simple syrup that adds a subtle layer of flavor to it. Makes the drink 10x better. I write music on the piano and play a lot of basketball. I wouldn’t say I’m NBA skilled, but definitely rec league all-star.

The moon was consistently a part of a lot of my dreams, so I decided to translate it for the cover. The ancient Romans believed that if you looked at the moon too long, you would go insane. Hence the reason that luna (moon) is the root word for lunatic. The moon’s smile appears so joyous it seems fake, almost like mockery. The mocking moon is the Good Life and we are the man with the knife. The cover seeks to answer, “What would we do for the Good Life?” Our pursuit of this fabricated Good Life has driven us apart. We are so obsessed with achieving it that we are driving ourselves insane. The laughing moon knows what it promises are unachievable, but it loves to watch us struggle, suffer, and fight to find the promised land that we all believe we are owed. In other words, the universe is laughing at us as we struggle to find joy in life.

Your book explores how scarcity can deteriorate into the dehumanization of others. Why, would you say is this such a fascinating subject?

Dehumanization is the natural consequence of scarcity and desperation. As resources become less available, and global poisoning impacts billions, the mistreatment of others requires rationalization and deflection for blame. We can see this rationalization and deflection in countries all over the globe. It is the reason why the us versus them mentality has led to an increase in the dehumanization of the “them”-- the people we don’t agree with and/or blame for their suffering. When people are desperate, they tend to follow the loudest voice that presents the easiest and quickest solution to their problem.

You studied political science. How has this influenced your writing?

I learned a lot about the relationship between politics and media. I based the book on research I have done about environmental concerns, my studies about politics, and from observations from life and what I see on the news. Doing the reading for my studies at Santa Clara, especially in my political philosophy class, then comparing the beliefs I learned about to what occurs now really helped fuel the ideas of my novel.

Most of my generation understands that our path is not promising. We want positive change, but we are worried about whether change can be achieved. Our political systems are broken. We don’t look at real problems as solvable. This requires study, cooperation, and work. Instead, we look at problems as talking points for blame. So, until problems become problems-to-solve and facts become facts to address, we remain on the road to nowhere.

Why did you title this "All Roads Lead to Nowhere"?

I titled it All Roads Lead to Nowhere because I wanted to demonstrate that each path we take on the political spectrum, no matter how good we think it is, will lead us to the polarized, separate, and amoral world of my book as long as they stay separate. Only if these paths intersect and we work as a democracy was intended can prevent the apocalypse from occurring. 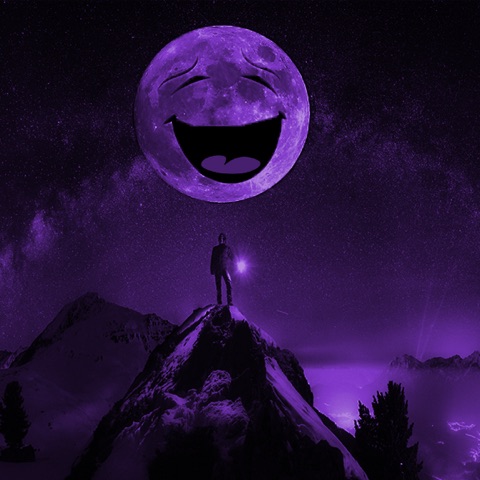 I like to write with music on by a window or outside. I’m like a lizard, I need to be in the sun. I try to stick to a schedule when I write. I’m also an “epiphany writer”, meaning I need a breakthrough in the plot or a character’s arc before I can continue. Sometimes, I don’t write for weeks then, all of a sudden, I’m struck with an idea then pump out 20,000 words in three days.

You can connect with me via LinkedIn, follow my Instagram @allroadsleadtonowherebook, and check out my website alexanderskikos.com. On the website, you will find a touching story behind the moon on the back cover of the book and the heroic artist who made it.