Barbara Underwood - Adventure in an Utopian Civilization That Built the Pyramids

Barbara Underwood - Adventure in an Utopian Civilization That Built the Pyramids
Posted on 29th of June, 2019 by Naomi Bolton 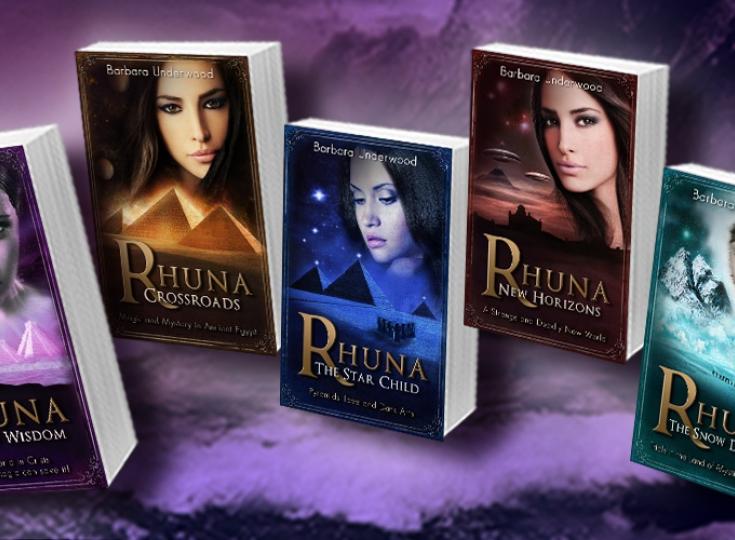 Barbara Underwood was born and raised in Sydney, Australia; the only child of German migrants who provided a rich and diverse childhood environment. Already in third grade she wrote a short children's book for a class project and realized that she was deeply satisfied with creating stories. In sixth grade, for another class project, her teacher was so impressed by the lengthy story she submitted, that he commented at the end "I see we are going to have another author".  Barbara had travelled extensively and gained a wealth of knowledge and experience in subjects that held special appeal for her, namely ancient history, myths and legends (such as Atlantis, the builders of megaliths around the world), folklore (the belief that a god-like race gave mankind its technology), human psychology and the culture of other countries. What could be a better subject for her first novel than a combination of all these elements into one big adventure!  Barbara lives in Tumut, a quiet town in rural New South Wales, with her husband, Bobby, who is also an author of a wide variety of fiction.  As our Author of the Day, Barbara tells us all about her book, Rhuna, Keeper of Wisdom.

Please give us a short introduction to what Rhuna, Keeper of Wisdom is about.

Rhuna is a young woman who discovers that the father she never knew was a man with special powers from the land of Atlán. She leaves her small island home to begin a new and exciting life in the Atlan Empire where she learns how to use her inherited powers of the mind: transforming elements such as sand to stone and lead to gold, summoning visions of faraway people and places, and other skills involving special mental power. But her happiness is marred when an Atlan man of great skill misuses his power and threatens to undermine the idyllic utopian civilization of Atlán. He becomes known as the Dark Master because he wears black robes instead of the Atlan Masters’ white robe, and Rhuna soon realizes that she can summon visions of his activities which the others cannot summon. The Atlan Empire needs Rhuna’s special gift to stop the Dark Master and restore peace to the utopian civilization!

What inspired you to write about the utopian Atlan Empire?

I’ve been interested in ancient mysteries since I watched “Chariots of the Gods” as a child and was fascinated by the pyramids, strange megaliths around the world like Stonehenge and the legend of Atlantis. Over the years, I kept reading more books about these subjects and developed a real passion for it. So, when I finished a correspondence course in professional writing, I knew what the subject of my first novel would be! Instead of Atlantis I chose “Atlan”, but many other places and ideas described in my novels refer directly to history and/or myths and legends. Since the legend of Atlantis tells of a highly advanced and utopian civilization before its demise, I decided to emphasize this in my story as well.

This is a prequel to Rhuna's adventures.  Did you write this book after the others? How do the other books in the series tie in with this one?

When I wrote Rhuna, Keeper of Wisdom, I was thinking of only accomplishing one of my most important goals, namely, to write a book. When I started writing, I wasn’t even sure I would be able to finish it, but it went better than I thought. Some friends who read it said they enjoyed it so much they wanted to read more, and I was pleased to hear this because when I finished, I felt I still had much more to tell. That’s how the idea of a sequel quickly came about, and fortunately I had left the ending of Rhuna, Keeper of Wisdom open, implying that although everyone thought the Dark Master was gone, he may have found a way to cheat death and continue his villainous ways. Since Rhuna, Keeper of Wisdom was set in the mythical land of Atlantis, I decided the sequel should be set in Ancient Egypt so that I could write about the pyramids. Her journey there takes place many years later, when Rhuna has a teenage daughter who accompanies her on this adventure filled with danger and life-changing experiences. The story of the Dark Master’s return and Rhuna’s discoveries in a new land ended up being too much for just one book, so I soon found myself writing a third book. By then, I realized I could continue Rhuna’s adventures even further by taking her to other parts of the ancient world where myths and legends abound. Along the way, she meets the father she thought was dead, is reunited with her mother, and finds unusual friends with various other powers to help her combat the Dark Master.

Tell us more about Rhuna.  What makes her tick?

Rhuna is a down-to-earth person with feelings and worries of any other woman. She is not the aggressive ‘kick-ass’ feminist heroine popular in many Urban Fantasy novels these days. She believes in the Atlan Way that has created a happy, peaceful and idyllic civilization, but at times she has had to use her own judgement when facing new challenges. Rhuna is driven by her love for what is good and right for all of humanity, but she cannot face opposition or the Dark Master without the support of her family and friends who are an integral part of her life.

Why urban fantasy, what drew you to this genre?

Actually, I’m not drawn to Urban Fantasy in general at all, and I only enjoy certain types of Science Fiction and Fantasy. When I decided how I wanted to use the knowledge I had gleaned over the years about ancient mysteries, New Age theories and legends, I realized I would have to include a magical or superhuman element, and that would automatically put the book in the Fantasy genre. Since it is set in our own ancient world, it becomes Urban Fantasy.

My other great passion next to writing has always been art, and I’ve been drawing and painting since childhood. Nowadays, my paintings are good enough to be displayed in exhibitions. Some other skills that are not as obvious are learning languages, as well as doing all kinds of needlework as a hobby. A more recent interest is aviation and learning how to fly in a flight simulator.

You grew up in Australia as the only child of German migrants. How has this influenced your writing?

For a start, simply being exposed to a different culture and language with my parents at home in contrast to growing up in suburban Sydney made me aware of other ways of living. My parents each had different interests and view on life based on their lives in Europe, and this also moulded my way of seeing the world and people in it. These things, I believe, are important when writing a story about people and other ways of living and thinking. Growing up with two languages and cultures also fuelled my interest in other cultures and languages, as well as travel – all of which later contributed to creating Rhuna and her world.

Yes, perhaps before I even knew it! When I was in fourth grade, for example, we did a special project: making a children’s book, complete with cartoon-like drawings. I remember that I found this very exciting and satisfying, and then a couple of years later, when I was in sixth grade, I had another opportunity to write a lengthy short story for a class project. My teacher was impressed and wrote a comment: “I see we are going to have another author.” So perhaps the thought was always there in the back of my mind while getting on with life and writing about travel experiences and other things. When several friends who read these articles, all began to say, “You should write a book!” I started to give it more conscious and serious consideration!

Apart from keeping up with (and on top of!) the ever-evolving internet marketplace for e-books these days, the one aspect I probably didn’t realize about writing before was how all-consuming it is. Even when you’re not physically writing, your mind is always working at the story – or sometimes even other stories! It can become an obsession if you don’t pace yourself and keep a balance in your life.

Perhaps it’s a combination of both a disciplined, scheduled approach and spontaneous ‘in the moment’ way of doing things. Sometimes, when inspiration hits me, then I try to take advantage of it and write as much as possible. Other times – and that’s probably most of the time – I sit down and look at the last few paragraphs I wrote and make an effort to continue on from there.

Usually, I don’t write in long stretches, and have a short break after several pages or paragraphs. This is because I visualize my story before I write it, and sometimes I look at images for inspiration (such as my Pinterest boards) or I simply play an easy computer game while my mind is working away at the next few steps in the story. I find that this step-by-step approach has better results than trying to write in one long sitting.

The website www.rhunafantasybooks.com features details about each book as well as a separate page called Rhuna’s World (http://www.rhunafantasybooks.com/rhuna-s-world.html) where you can see a map of the places Rhuna has visited in the ancient world, as well as details and images of the main characters in the series. There is also a page of Free Gifts where anyone can download specially designed Rhuna-themed greeting e-cards. There are Christmas cards, Thanksgiving and some for the seasons, and there are more to come soon!

There is also a blog with articles that pertain to the Rhuna series, as well as pages with images about the books and about me. Furthermore, since I visualize the scenes and people I write about, I enjoy using Pinterest. There are Pinterest boards for the various aspects of the Rhuna series such as Ancient Mysteries, Intriguing People, Mysterious Megaliths, Fascinating Places, Esoteric Egypt and quite a few more. https://www.pinterest.com.au/KeeperWisdom/boards/

Another way to learn more about me and the Rhuna series is to subscribe to my monthly newsletters which give insights into the research I do for each book, among other things Subscribers can also access the exclusive “behind-the-scenes” articles for each book. https://my.sendinblue.com/users/subscribe/js_id/2vh2i/id/1