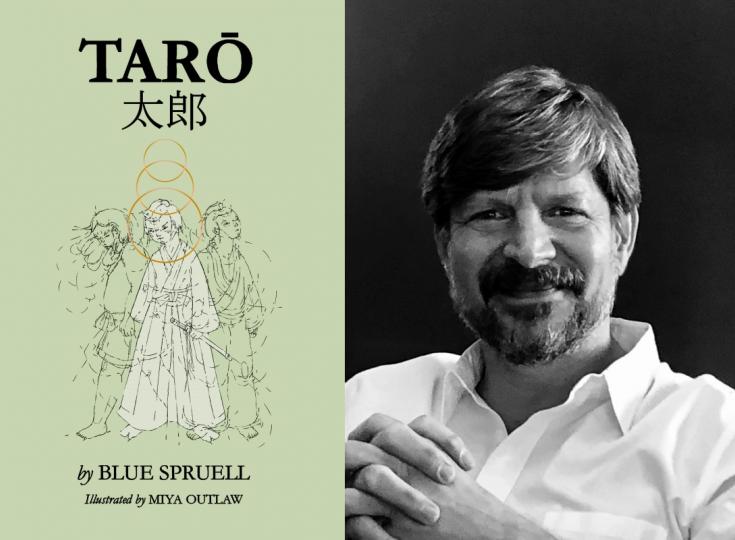 Born in Memphis, Tennessee, and raised in Atlanta, Georgia, Blue Spruell lived and worked in Japan for several years before returning to Atlanta. A trial lawyer and certified mediator, he runs his own firm, The Outlaw Firm, specializing in family law and civil litigation. An internationally recognized black belt instructor, he also owns Peachtree Aikikai, a dōjo for Japanese martial arts. As our Author of the Day, he tells us all about his book, TARO: Legendary Boy Hero of Japan.

Please give us a short introduction to what TARO: Legendary Boy Hero of Japan is about.

Taro is Japan’s legendary boy samurai. He’s also the quintessential hero of three timeless Japanese folktales: Kintarō, Urashima Tarō and Momotarō [Golden Boy, Island Boy and Peach Boy]. Each legend stands alone, they’re unrelated except in name [Taro is roughly equivalent to Junior], but I thought it might be interesting to weave their stories into Japanese history, an alternate history of course.

The year is 1596 when three powerful samurai warlords battle for control of the Imperial throne. Tarō doesn’t want to be a samurai like his warlord father, but fate takes a hand when a witch enchants the boy. Gaining supernatural powers, and befriending the magical forest animals of Mount Fuji, Tarō saves another powerful warlord’s life and discovers his destiny as he hurdles headlong into the total war for ultimate control of Japan.

I have a strong affinity for folklore, fables, myths, and legends, innately, and for all the reasons that Joseph Campbell expounded. I imagined a parallel between the personalities of Japan’s three warlords, the Great Unifiers, and Momotarō’s animal companions, the pheasant, monkey, and dog, and I thought it might be interesting to write a story about it, an update of the classics in an alternate historical context, a new legend.

Tell us more about Taro. What makes him so special?

Taro was born to privilege as the son of a powerful samurai warlord, but he isn’t interested in samurai duty and sacrifice. Taro is a sensitive boy, a bookworm, a mama’s boy, and his mother dotes on him, which doesn’t sit well with Taro’s father who wants Taro to attend to his martial studies so he can claim his birthright and become the great samurai his father intends him to be. Of course, fate takes a hand when a witch adopts Taro and he develops supernatural powers and animal companions that propel him farther even than his father ever imagined.

You also own a dojo. How has this influenced your writing?

Well, obviously, it greatly influenced this book, since I drew heavily on what I know of martial arts training and Japan. I just hope it translated onto the page. Hopefully, it helped the reader visualize a fight scene, or understand the martial philosophy and perspectives of the characters, or appreciate the mysticism of martial ideals.

Hmm, I’m a trial lawyer by day, does that count? I have a small firm in Decatur, Georgia, focused on family law and civil litigation. And I do speak some Japanese. Actually, I have a number of Japanese clients. I guess I might be the only attorney in Atlanta who speaks Japanese.

What fascinates you about Japanese folklore?

I might be at a loss for words here. It speaks to me, as so much of world folklore does, on a primal level. It’s the wisdom of ages. I love the characters and their circumstances, of course. And Japanese stories in particular have a mystical, magical quality to them. And a host of supernatural creatures to delight or terrify.

How much research did this book require from you to make the history part of this ring true?

A lot. Fortunately, I’ve been fascinated with Japanese history for many years. But I didn’t sit on it. The book was a great excuse to read a number of histories focused on Japan and sengoku jidai, the period of total war between Japan’s provinces, and I learned a lot I didn’t already know, and I’d still like to learn more – and to have written more about the history of it, but I felt this book shouldn’t be overpowered by the history but instead be the history, an alternate history, of course, and one I hope the reader will embrace. I hope I pulled it off. Anyway, I love history and historical fiction so the research was less work, more guilty pleasure.

Who are some of your personal favorite authors and why?

Robert Louis Stevenson deserves first place for being the first author that truly captured my imagination. Treasure Island is the quintessential adventure story. And J.R.R. Tolkien was a genius. Say what you like about his writing style, to me it conjures the epic poems, Beowulf and Chanson de Roland, but his imagination, his world-building, every fantasy writer after him is destined or doomed to make his stand in Tolkien’s shadow. What I wouldn’t give to read The Hobbit and The Lord of the Rings for the first time again, not knowing what comes next. I was glued to those books for days, you know. So, I guess you could say I like fantasy and adventure, but I love history and historical fiction, too. And I have my writers who inspire me with their incredible styles, Faulkner, Mishima, Marquez. Their narrative makes your head do somersaults.

What did you have the most fun with while creating this story?

I loved writing the characters. A recent reviewer said of my characters, “The author seems to know them very, very well and is determined for the readers to know them too.” That made me feel good, like maybe I succeeded in bringing them to life, at least on the page, because those characters aren’t just mine, they exist, you know, in history or maybe only in Japanese myths and legends, but they’re all larger than life to me, so it was no easy to task to do them some justice. In that, I had a lot of fun working with my wife Mitsuko. She deserves a lot of credit as my harshest critic, helping me keep the story authentic, since I’m only an adopted son to her native Japan.

The cover was my concept but all Miya, my daughter. She deserves all the credit really. I had the idea that the cover should evoke “the three Taros,” Kintaro, Urashima Taro, and Momotaro from Japanese folklore, but Miya brought them to life with her drawings. Her affinity for Japanese culture and her heritage really shows in each illustration, and in the cover art, I can see Taro’s developing personality in each of her figures, the wild orphan, the disillusioned outcast, and the quintessential hero of Japan. Sure, call me a doting father, guilty as charged, I can’t help it, but to me the most charming part of this book is her drawings.

Are you planning on re-imagining any other Japanese folktales?

Working on it. My next project is similar but not the same. But I can’t talk about it, not yet, but I’ll keep you posted.

I am OCD, but I’ve improved. When I was much younger, I couldn’t start writing until everything was in its place. Now, I look back and shake my head and think, what a waste, but I still struggle with excuses. Law practice is a pretty big one, so it’s hard to find time to write every day. When I do find time, it’s an obsession that usually leads to lost meals and sleep and forgetting to move even to pee – and predictable family grumbling.

Well, I am working on the next Japanese story, but I have others in progress as well – a non-fiction book on Japanese martial arts that feels perpetually unfinished, a refit of a novel about my father and grandfather, and some editorial work on my mother’s saga about her career case as a budding attorney, now that I am looking forward to seeing in print!

Readers can find an excerpt of the script I adapted from the novel about my father and grandfather, Greetings from Shangri-La, at www.greetingsfromshangri-la.com. If interested in martial arts, they can visit me at www.peachtreeaikikai.com. And, of course, if they’re interested in Taro or just want to contact me, they can visit www.taro.fan.