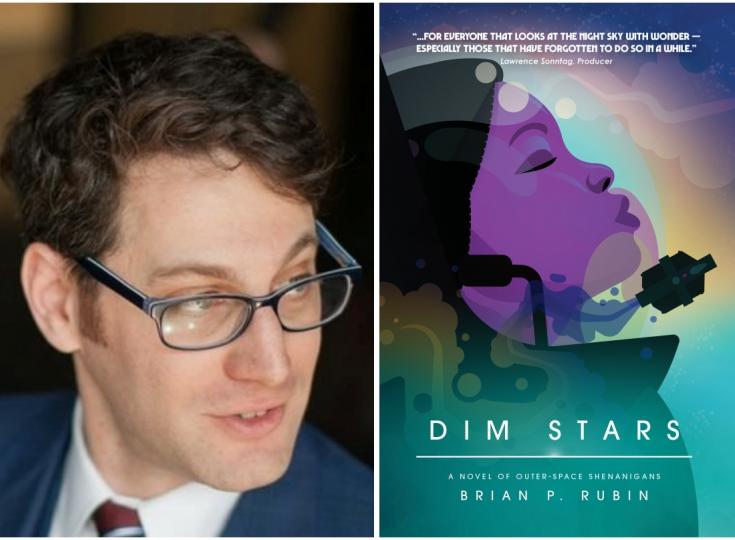 Brian P. Rubin has written articles and blogs for City Pages, Geek Magazine, Machinima's Inside Gaming Daily, ReadWrite, Looper, and Grunge, among several others that both time and the Internet have forgotten. He even wrote questions for Trivial Pursuit, none of which actually wound up in the final game. So that's cool. His first novel, Dim Stars: A Novel of Outer-Space Shenanigans, was published in 2020. He lives in Minneapolis, Minnesota, with his family. As our Author of the Day, he tells us all about his book, Dim Stars.

When people ask me what the book is about, I like to say "weirdos on a spaceship trying not to die," which is a thing I really like to say, but maybe doesn't communicate a ton about the actual plot. My wife is better at this — she tells people who ask about it that it's about an unpaid internship on a spaceship. So, yeah...jam those two ideas together and you've got a pretty decent idea about the book. Dim Stars' two protagonists — brilliant teen Kenzie Washington, and her idol, former space hero Captain Dash Drake — butt heads about pretty much everything, and when they have to try and save the galaxy together, it goes about as poorly as you might hope.

Basically, the book is about meeting your heroes, trying to live up to your potential, and trying to see past the lies we tell each other and that we tell ourselves.

What inspired you to write about a 14-year girl genius who signs up for a tour as a cadet on a spaceship?

One of my favorite episodes of Star Trek was a Deep Space Nine episode called "Valiant," in which we encounter a warship staffed entirely by cadets from Starfleet Academy. For some reason that premise really stuck with me, and I always wanted to do something where young people are put in the position of flying a spaceship. I probably watched too much "Flight of the Navigator" when I was a kid. I was also heavily influenced by the video game "FTL: Faster Than Light," where you manage a spaceship and everything is going wrong constantly.

Anyway, I was trying to figure out the right way to pursue all these ideas with another writer friend of mine from college, Greg Williams, and he helped point me in the right direction. He suggested, basically, a put-upon teacher trying to wrangle a student who was too smart for their own good — and from there the rest just fell into place. Forcing Kenzie's enthusiasm for space heroics onto a guy like Dash, who was completely over his own fame, just made me laugh. The book almost wrote itself after that.

Tell us more about Kenzie Washington. What makes her so special?

Kenzie's true superpower isn't that she's super-smart, or super-capable — but she is both of those things. It's that she's just super-enthusiastic and having fun even when everyone is afraid they're going to die on an exploding spaceship. I tend to be a somewhat cynical guy, so it was surprisingly fun to write someone who was so unflappably upbeat in the face of so much chaos. And since so much of her enthusiasm actually drove a lot of the chaos Dash and the rest of the characters face, Kenzie drove a ton of the comedy in the book. I think she's the deep, secret optimism I keep buried and try not to let most people see.

I've been a fan of stuff like Star Trek and Star Wars and all that stuff since I was young. I love gadgets and tech just generally — but I also love how tech can be a great engine of humor. Nothing's more frustrating when your phone or your printer doesn't work...and nothing's funnier than when that happens to someone else. This book is basically about watching a bunch of people stuck inside a giant, crappy printer. And there's a paper jam.

Readers say your characters are quirky and lovable. How did you pull this off?

I'd like to think that I am both quirky and lovable. Via the transitive property, my characters are therefore quirky and loveable. Also I made one of them a nervous, talking octopus who doesn't understand sarcasm, so that probably helped get me a few extra points.

Interesting cover - please tell us more about how it came about.

My good friends Collin David and Beckie Hermans are both super-talented artists. I've known Collin for years and years, and I've collaborated with him on lots of projects in the past. So when it was time to create a cover for Dim Stars, I knew I wanted to work with them. I provided them with drawings by another amazing artist I'm friends with, Will Lakey, who designed the look of Dim Stars' spaceship, the Gremlin. Once they got those drawings -- some of which I made sure to add to the book itself, they really took the ball and ran with it, and I pretty much fell in love with their designs immediately. There weren't a lot of iterations once they got going. The two of them are just so amazing — I'm so lucky to have such a great cover, because it makes the book look a lot classier than it probably is.

What did you have the most fun with when writing Dim Stars?

It's hard to pinpoint actual fun things about writing...I've always described writing as trying really, really hard to remember something that hasn't happened yet. So it's often hugely frustrating and exhausting. But I can admit that I had a lot of fun writing the dialogue when my characters fight with each other. I think I live in those moments of crisis where everything's going wrong, so it was a lot of fun finding creative ways for the characters to yell at each other as things were exploding and the walls were coming down around them. I should probably talk to my therapist about this.

The book contains a lot of humor - why did you take this approach?

As I mentioned, I've been a huge fan of Star Trek my whole life. And what a lot of people who don't watch Star Trek don't realize is that the franchise has always been really, really funny. My favorite moments are when the actors get to play the scenes for laughs and really just kind of embrace the absurdity of some of the things that are going on in space. The comedy episodes are usually my favorites. A picture of Captain Picard is the source of the facepalm meme, after all. It's just an image of a person who is completely and totally over it. I kind of feel like that'd basically be all of us if we were stuck in space dealing with a bunch of dumb aliens always threatening to mess with us.

And really, science fiction is just a natural place for comedy to happen. Technology keeps advancing, so every day we're getting more and more enmeshed in a science-fictional world. But no matter how much tech or how many gadgets we have in our lives, we're still all just the same vaguely stupid, irritated people having to cope with it all.

Did you plan out the entire story before you started writing, or did a lot of it just "happen" along the way?

It was definitely a mix. I had a few of the big plot beats for Dim Stars in my head for years before I finally got around to writing it, back when it was a different book idea entirely. But as I wrote, there was a lot of problem solving and discovery as the characters did and said things in interesting, surprising ways.

I'm slowly poking at a sequel to Dim Stars. The pandemic coincided with the first couple years of my son's life, so it's been very tough to stay on top of a regular writing schedule. That said, as tough as writing the first book was, I still have a great time when I read it, so I'm chasing that feeling again with a sequel and trying to think of ways to play with these characters some more without treading the same ground. It's hard!

My website, https://www.brianprubin.com, has links to a few of the more memorable pieces I've written in my career as a writer. I'm also all over Looper.com, where I'm the Senior Managing Editor. I've just started hosting a new video show on Looper's YouTube channel that's been a lot of fun, where we just talk about movies and comic books and things like that. And you can find my admittedly unimpressive social media accounts on Twitter and Instagram at @brianprubin, and my Facebook author page, https://www.facebook.com/brianprubinauthor. Come say hi! Maybe I'll think of something interesting to say there someday.