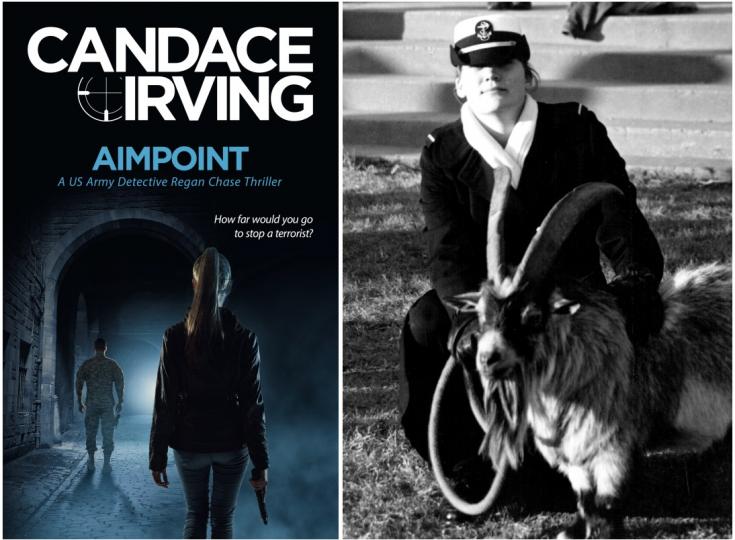 A former US Navy Surface Warfare Officer, Candace Irving currently writes mainstream mysteries & thrillers featuring strong female leads. Visit candaceirving.com to sign up for her newsletter & find out more about her Deception Point Military Thriller series. As our Author of the Day, she tells us all about her book, Aimpoint.

Please give us a short introduction to what Aimpoint is about. What inspired you to write about a Special Forces sergeant who possibly turned terrorist?

Aimpoint is a military thriller. Here's the short plot teaser: Has a Special Forces sergeant turned terrorist? US Army Detective Regan Chase must use her budding relationship with his roommate to find out. But John Garrison is hiding something too. Has the war-weary officer been turned as well? As Regan's investigation deepens, lines are crossed—personal and professional. Even if Regan succeeds in thwarting a horrific bombing on German soil, what will the fallout do to her career?

Although Aimpoint is Book 1 in my Deception Point military thriller series, I actually wrote the second book first. In Book 2 (Blind Edge), I'd created a rather explosive backstory for Regan & the Special Forces officer who thwarts her murder investigation at every turn. When I decided to go Indie, I realized I had the freedom to write that backstory to introduce readers to Regan and provide it free. That said, Aimpoint was an odd story to craft. Because Regan's first full-length novel was already finished, there were plot and character marks I needed to hit in Aimpoint for Blind Edge to play out the way it does.

When I started Aimpoint, I discovered that, while the story did take place in Hohenfels, Germany, and Regan was undercover at the time, the case I'd referred to in Blind Edge was all wrong. The US reversal of support in Syria amid Turkey's push into the north of that country was in the news, and it hit me: that's the real backdrop for how Regan & John met, as well as the Special Forces sergeant-turned-bomber's motivation. I've been thrilled with Aimpoint's reception. There's something so cool about discovering that the story you labored over for months has resonated with readers. It makes those 2 a.m. struggles worthwhile!

Tell us more about Regan Chase.  What makes her tick?

Regan has a dark spot in her—one that affects her personally and drives her professionally in ways that, at times, even she wishes it didn't. When I created Regan, I knew her dad had been a military cop too. But unlike Regan, he was unethical. Her dad was arrested and then murdered by another cop before his trial. Regan's mother couldn't handle the shame and media coverage, so she checked out of life months later, leaving a confused and emotionally scarred six-year-old Regan to deal with the fallout and a childhood of foster care.

So, yeah, Regan has issues. Some she's actively trying to work through; others will no doubt linger for the rest of Regan's life. But it's this past that allows the Army detective in her to connect with victims and suspects alike. It's also what keeps Regan determined to see a case through to the bitter end—often despite very personal costs to herself.

What makes John Garrison so special?

Like Regan, John had a rough up-bringing. While John's dad was around for his childhood and teenage years, the man was physically and emotionally abusive. The emotional abuse in particular left deep scars on John's soul—scars that are much worse than the ones combat carved onto his physical body. But as with Regan, that abuse drives John in his personal and professional lives. Fortunately, Regan not only sees those inner scars, she appreciates how hard John's worked to overcome them.

John's deepest fear is that his dad's rage is buried inside him, waiting to break free. Of course, cruel author that I am, I'm currently exploring that fear—and its trigger—as I write the next book in the Deception Point series. (Hint: that trigger centers on Regan!)

You are a former US Navy Surface Warfare Officer.  How have your own experiences influenced your writing?

The Navy definitely affects my writing. It's been part of me since birth. My dad's a retired chief, so I grew up as a Navy brat, living on bases in foreign countries around the globe before I entered the Fleet as an adult. I also enlisted in the US Army when I was a senior in high school. I was only in for a few months though—just long enough to survive basic training—before I accepted a branch transfer to NROTC at the start of my freshman year of college. But that brief Army service gives me a bit of leg up when I'm doing research for Regan and John, as well as my previous military romantic suspense novels. It also allowed me to better understand my husband when we were both active duty, since he's a former Army combat engineer. (And if you think watching the annual Navy/Army football game is intense, try it in our house!)

As for my Navy side, the first book I published under my alter ego was set aboard a warship. Not only did I have a lot of fun writing that book, I came up with the premise for it years earlier when I was standing Officer of the Deck duty aboard a ship.

As for my current thrillers, one of Regan's best friends is an NCIS agent who makes an appearance in Aimpoint. Mira Ellis will be fronting her own novel in the latter half of the Deception Point series, so I'll be drawing on my Navy days in a major way when I get to that book.

But the Squid in me crops up in Regan's Army stories too. For example, while Book 3 in the Deception Point series (Backblast) is Army, for plot reasons, the first half of the novel is set aboard a warship.

It's not a skill, but I did have the coolest part-time job in college. I worked security on weekend nights for the UT police. Since I had to attend the roll call/turnover meeting prior to going on duty, I got to know two of the cops well. One or the other would grab me on the way to chow in the middle of the night. More often than not, I'd end up on a call out with one of the guys before the meal was over. Around 3 a.m. on my second night, I was caught up in a hair-raising, highspeed chase down Austin's MLK boulevard.

The UTPD security gig, along with my BA in political science, probably explains my fascination with police procedurals, as well as why my own military detectives' investigations tend to end up dipping into the geo-political realm before the books are over.

I'm also the world's absolute worst speller. Okay, that's not exactly a talent either, but it does explain why I argue out loud with my computer's spell check function on a regular basis. I'm pathetically far from skilled at Hatha yoga as well, but I adore practicing it, along with riding my bike down backcountry roads. I do a lot of plotting in my head while cycling! 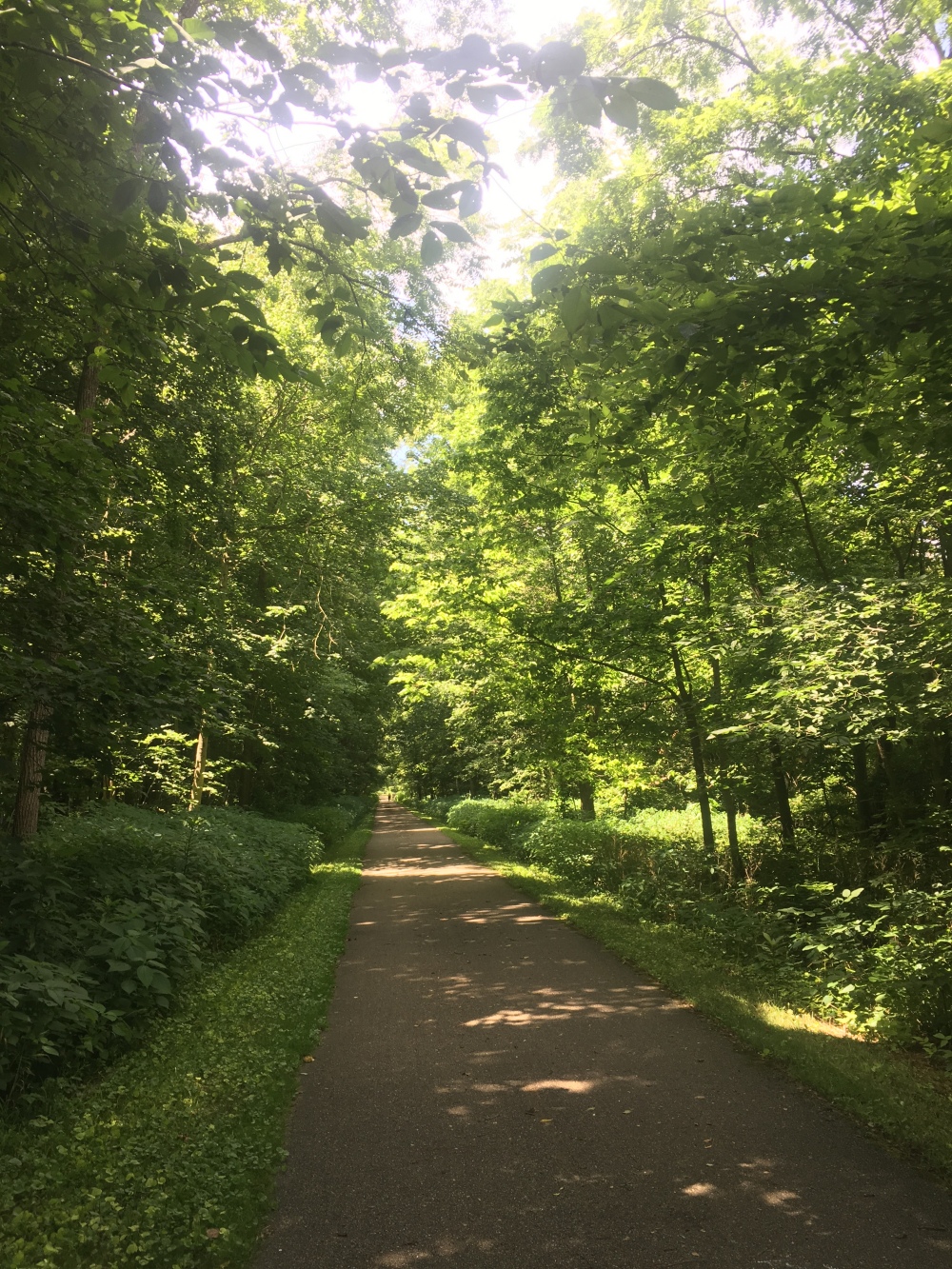 This is Book 1 of a series.  Can it be read as a standalone? How do the other books in the series tie in with this one?

All the books in the Deception Point series are standalones plot wise. Regan and John's relationship arc does progress and grow from book to book though. Also, once Regan's closed a case, she does refer back to certain aspects of that case where appropriate in subsequent books. So if those are sticking points for readers, they should definitely take them into account!

Aimpoint includes some twists and turns.  Did you plan it all out before you started writing, or did some of it just "happen" along the way?

Oh, I'm definitely a plotter. (I can actually hear my critique partner laughing at this one.) I have a serial killer book coming out in December. The Garbage Man is 102,000 words. The synopsis was 29,000. I wish I could say that's my longest synopsis to date…but I can't. I've finally had to accept that writing a hideously long, plot outline is part of my process. Fortunately, spending so much time thinking about a book at the front end helps during the actual writing. My first draft are pretty much "good to go" as soon as they're finished. While there are always revisions, they tend not to be extensive.

I'm not sure I have a message per se, at least one of which I'm aware. But I do really love creating characters who live in the gray. I don't think people are all good or all bad. (Though there are some who definitely have more of one or the other in them.) I try to portray that mix as best as I can.

Also, I need to know why a character does, or would do, something as I write. At times I have to remind myself that while that motivation might not sit well with my worldview, it should sit comfortably well within the character's.

Ultimately, it's through that motivation that I'm able to connect with the story. Hence, when a story stops working, I tend to go back and take a hard look at the whys. Usually the issue can be found—and fixed—right there, and then the story's back on track.

Readers can visit my website www.candaceirving.com and sign up for my newsletter. I love to hear from readers! They can also email me at [email protected] and/or connect with me via social media at: