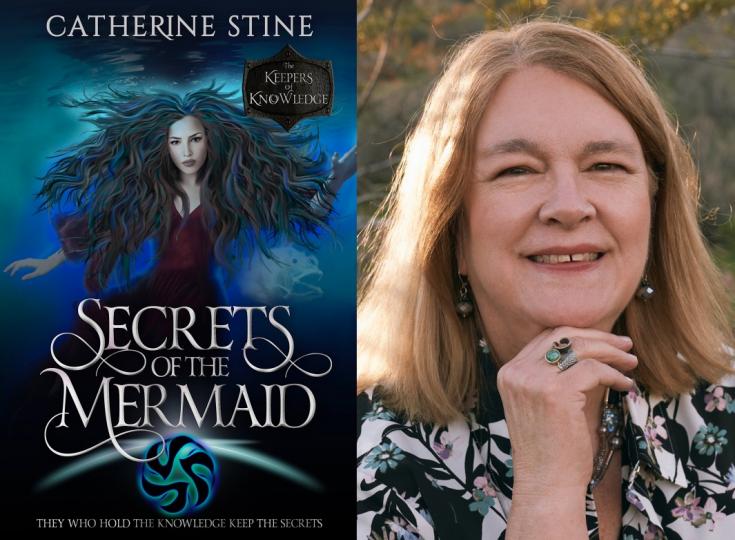 Catherine Stine is a USA Today bestselling author of paranormal, urban, and historical fantasy with romance. Witch of the Wild Beasts won second prize in the Romance Writers of America’s Sheila Contest. Other novels have earned Indie Notable awards and New York Public Library Best Books for Teens. She lives in New York State and grew up in Philadelphia. As our Author of the Day, she tells us all about her book, Secrets of the Mermaid.

Please give us a short intro to what Secrets of the Mermaid is about.

Indigo Rain is a beautiful but lonely mermaid. Regretful of a dark past, she has vowed to remain alone and research ancient merfolk tribes. When she unearths a seabed burial site even she cannot identify, she shares this with a High Council merfolk historian. But she keeps one shocking secret to herself.

Bay Finley is the flirty, dashing royal merfolk Keeper assigned to teach Indigo on Pyreshore, a glamoured city of supernaturals tasked with keeping invaluable knowledge alive. Indigo thinks Bay is a know-it-all. She also thinks he’s dangerously handsome. He’s engaged to Abigail Torrent, a royal, unlike Indigo, but he’s spending time with Indigo in the lab…

Uncover the mystery of the burial tablet, resist Bay’s charms, and never, ever reveal her biggest secret, even to the Keepers.

My writer friend invited me to pen one of the books. I like shared world projects because unlike a regular series, these books are standalones, so readers can read them in any order. In addition, the character list said that one of the Keepers, Bay Finley was a royal. I immediately thought it would be great fun to write a royal vs commoner romance—think Harry and Meghan!

Why mermaids? What fascinates you about them?

People are fascinated by mermaids because they can swim underwater without breathing, and like fairies, they’re described as both good and darkly mischievous. I like the dichotomy. They also have a complex and scary lore. For instance, they have been accused of luring sailors to their death. Beyond this, it’s spectacular to inhabit a mermaid character as she races around. Here’s a line: “Out of sheer exuberance, Indigo performed somersaults, twirls, and grand swoops up and over the seabed ravines and ridges.”

Tell us more about Indigo Rain. What makes her tick?

Indigo is haunted by her past, and she longs to have a merbaby, but she has found out she’s barren. She has decided to devote herself to being a merfolk scientist and studying ancient tribes. So when she meets Bay, her world is thrown into passionate disarray. He’s out of reach because he’s engaged, and a royal, unlike Indigo. He’s also a rake and a rebel, and she has to intern with him in order to study the tablets. They are competitors, enemies, yet she’s strangely drawn to him.

I’m an artist and before writing novels I showed my paintings in galleries. Visualizing scenes and characters throughout the process helps me to write them, so it’s a helpful alliance of skills.

Oh, for sure! Bay Finley, Indigo’s enemy-to-lover counterpart starts out as an incorrigible playboy rake, but in the scenes with Indigo, he begins to confess his torment to her—his dislike of being born a royal, and his longing to rebel and break free—including breaking off his arranged engagement to royal Abigail. It was an interesting development that I decided to run with.

This is part of a 10-book series. Please tell us more about this.

The head of this project created the world: Pyreshore is a glamoured New Hampshire town where supernatural beings of all sorts, keep the magical histories and artifacts safe from the outside world. They are called Keepers. We had a choice of which being we wanted to write, and I jumped at the chance to write a mermaid character. I am fascinated by the ocean and all of its many creatures, so I knew I would love this.

What did you have the most fun with while writing Secrets of the Mermaid?

I always love writing the romance part—the push and pull aspect, and the building of the flirty friendship. I also liked crafting the mystery/thriller aspect of decoding the tablets, and then figuring out who the villain was and what they wanted. Finally, it was cool creating the sensual suspense of Indigo and Bay swimming undersea, including them fending off monstrous phantom beings—the perilous wonder of it all.

Dark Unicorn designed the cover. I had input as far as the model, and some of the color combos. Oh, and I chose that strange ghostlike fish. LOL.

Why did you give Indigo three quests?

She’s compelled to hide her two big secrets (not telling here), which creates tension and mystery. I also had to keep the would-be lovers apart until the end, so she had to resist Bay’s rakish charms! And because she’s a scientist, she’s obsessed with trying to decode the burial tablets.

Don’t rush things. Get in a trusted writing group to workshop your chapters. Do not painstakingly edit until the first draft is complete.

Any interesting writing habits? What is your average writing day like?

I do my best writing in the afternoon. I need to be in my studio, where it is quiet. I cannot write while listening to music, which is weird, because when I used to paint I always listened to music!

I’m in my brainstorming phase. I always take a short break between projects to refresh. I’m leaning toward creating an urban fantasy series, though I’m also considering a historical romance. And there are always more witch books playing in my head. LOL. Check back with me in a month or two!

Visit my website at catherinestine.com to check out books, event news and to sign up for my newsletter. The newsletter will keep readers in the know! I love to meet readers at book fests, and I can’t wait to get back to this! So again, if you subscribe you will be the first to know. You can also send me an email via the newsletter. I’m also on Facebook, Bookbub, Instagram (as @kitsy84557) and Tik Tok (as @catherinestine7).