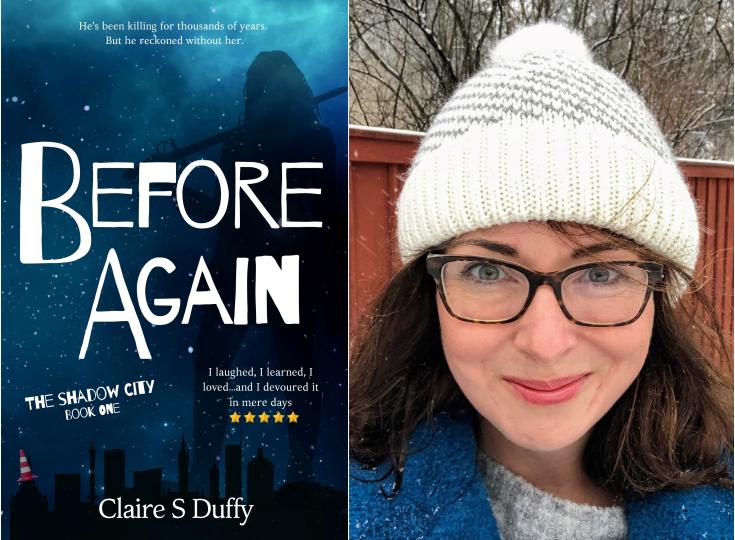 Claire Duffy was a screenwriter for over a decade until she caught herself cycling past a production company and giving it the finger. She decided she didn't like the person the film industry was turning her into. Duffy quit, took a temporary job at a daycare in Stockholm, and wrote her first novel while her class of one-year-olds took their afternoon nap. Through blogging that story in daily chapters, she discovered indie publishing and never looked back. Duffy trained at LAMDA and the Vancouver Film school then worked in theatre and film in London before moving to Stockholm, where her comedy, Sånt är Livet, was commissioned by Swedish television. She directed the pilot for Love Refugee, was a showrunner on Real Tales: Södermalm, and ran a series of live-streamed development readings of works in progress. She also wrote the feature Guilty and the series Diamond Life, both in development with Fat Pictures in London. Her best-selling crime thriller series Glasgow Kiss was selected for Crime in the Spotlight at Bloody Scotland, and she writes the original audio series The Stranger/Annars Tar Jag Dig for Storytel, read by Joanne Frogatt.

Please give us a short introduction to what The Shadow City: Before Again is about.

Before Again is the first book in the Shadow City series, and it tells the story of Kirsty who comes home to Glasgow after ten years abroad. The night she arrives, she comes across a man being burned to death on the banks of the Clyde - she batters in to save him, tears the fabric of time, and lets loose an ancient serial killer.

It's an urban fantasy crime thriller with a bit of feminist rage, a bit of paranormal romance, and a lot of Glasgow humor!

I moved home to Glasgow after thirty years abroad and during lockdown spent a lot of time walking every inch of the city, finding myself more and more fascinated by its history and stories. The following summer I went paddleboarding on Loch Lomond and a thick fog suddenly came down. As I was trying to figure out what to do, I saw a large shadow floating a little way away -- to this day I have no idea what it was, but the mad idea popped into my head that it looked like a Viking warship... and that's when this story started to build!

Tell us more about Kirsty Mclvar. What makes her tick?

Kirsty was orphaned at eight years old and raised by her gran Morag and her great gran, notorious sixties gang leader, Agnes. She resents her name being attached to the feared gang, and that's partly why she escaped the city and spent a decade wandering the world where no one knows where she is. Finding herself responsible for the people she brought into the present is exactly what she has run from her whole life -- and just what she needs. She's determined, fiercely loyal and doesn't suffer fools gladly.

You have worked as a screenwriter for over a decade. How has this influenced your writing?

I think I still plot like a screenwriter - I'm all about cutting to the chase!

I don't know if it counts as a skill as I am TERRIBLE at it, but I recently discovered a passion for circus fitness so am now normally to be found swinging upside down from a trapeze!

Well, it was my first time writing steamy scenes. One of my good friends who beta-read the first draft pointed out that at one point I'd made his arms as long as her legs - which led to a slightly drunken choreography session in my garden!

There is a complete story in this book, but I think it's clear that there is lots more to come!

For me genre is always dictated by the story - if murders start happening then I guess it's crime! With this one, I didn't set out to write a fantasy story, but when characters appeared from the past, I realized that magic was a part of this world.

I am very lucky to write full-time, but to be honest I don't really have an average day. For years I used to try to commit to one routine or another but eventually learned to go with what feels right for that day. The place I am in the story or just how I'm feeling that day can completely change things, so as long as I meet my deadlines in the end I'm happy!

I'm hard at work on the second Shadow City book which will be out in April.

I'm @fikabooksclaire on Instagram and TikTok, but the best way would be to sign up to my newsletter here: https://www.fikabooks.com/newsletter You get a free book when you sign up, plus other book features, recommendations and sneak peeks of whatever I'm writing at the time!

The Shadow City: Before Again

Claire Duffy
When a portal unleashes a paranormal threat, can one woman put an end to the killings? Kirsty McIvar chose to be a lone wolf. But after leaving her dreaded hometown behind, she reluctantly returns ten years later to attend her grandmother’s funeral. When she rushes to rescue a man being burned alive, she tears open the fabric of time… and sets loose an ancient killer.
Paranormal
$0.99
$4.99
Amazon