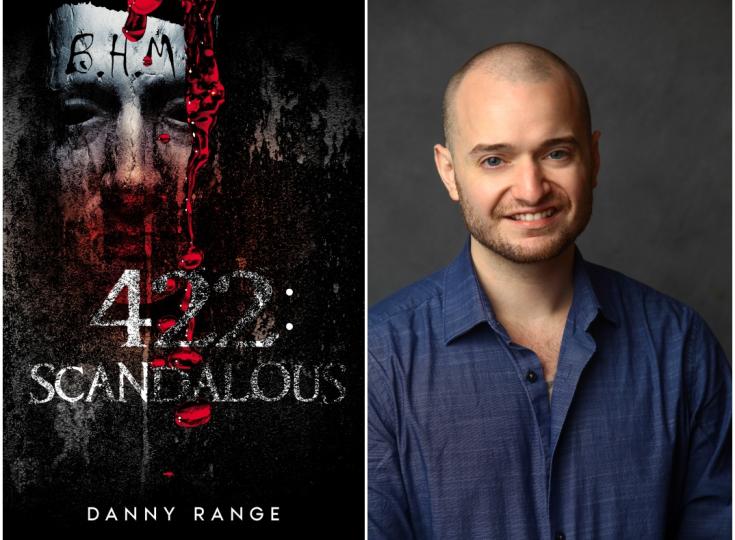 Danny is a 29-year-old author, MBA, actor, public speaker, and screenwriter who is currently shopping this book to LA Executive for a TV adaption. He is also a survivor of suicidal urges and was raised by a single mother. As our Author of the Day, he tells us all about his book, 422: Scandalous.

Please give us a short introduction to what 422: Scandalous is about.

Scandalous is about a former gangster who pursues a real life, taking a normal accounting job while five years sober. As he falls in love with a taken woman, he must fight against the wishes of his mental illness, as it begs him to teach her man a lesson.

What inspired you to write this story? Why did you decide to write about a former gangster?

Everyone wants me to say I was one, but I'm not. I'm inspired to write this because he's sick, as I was once sick. The mafia part and the events are fiction, but the character's personality, his illness, that's me in real life. I got help, and I'm ok. I need to show the world what happens to people like me when they don't get help, so they'll know how serious it is.

Tell us more about Bruno Marchesi. What makes him tick?

Bruno is an old-school, Italian family man. He's raised by gangsters, who've had an allegiance to The Black Hand mafia since before the family traveled to America. He hates cheating men, as his grandmother was cheated on, and wants them all to die. Bruno is also gifted with the highest IQ possible, and has aspirations to be a family man who started a real business. He wants to leave it all behind, but it's hard to; it's all he knows.

Why did you title this book "Scandalous"?

Each book will be based off a quote or a character. With "Scandalous" Sandra being the focus in the series' opening book, I felt it was necessary to tip my cap to her.

Readers say the book is dark and intense. Was that your intention?

Of course. You can't get people's attention with a smile and a quiet message. You have to scream it in their ear. Who gets more views? A quiet social media message? Or, somebody screaming that message, running around naked? Even if some people don't get the message, there's a higher chance of reaching an audience if I do it this way. I'm ok with half the people calling me a freak if the other half calls me an inspiration. You can't make everyone like you, but you can get everyone's attention if you do it the right way.

What do you hope readers will take away from the story?

Tommy's gangsters. I couldn't find their voice; they're African American, so I didn't want to use the "N" word and other things, but then the way they talk wasn't realistic. But I really hit a home run with the rhyming. Lesson here: take your time, and trust God's timing. If I rushed this, I would've have a character that goes on to become a bigger part of the series.

Addiction and mental illness are prominent topics in this story, why did you find it important to write about?

It's explained above. I have direct experiences that inspired these stories. I am Bruno Marchesi, but I got help, so no, I'd never kill anybody. He's like my evil twin that didn't get help and is more violent.

Interesting cover. Tell us more about it.

Boy, this is my third cover. I had one made by my cousin and did professional pictures for the second cover. People TRASHED it! If you look at my reviews, most aren't five stars because of the cover, only. I was forced to change it, so I ran a contest and let social media and friends pick the winner. I'm glad I fought my pride! As for what that ghost is, I won't ruin that for you. Read it!

Are you a plotter or a pantser? Do you plan out your story or just see where it leads once you start writing?

I wrote the next three books at 85,000 words each in three months. I see a picture in my head and it flies out of my hands. You can call that gifted, but I call it "chosen." God wants this message out there, as he knows I can help people with my voice. You can believe that or not, but I know what's true. I don't care what people think anymore.

In which way is this a cautionary tale?

You can be triggered if you've struggled with suicidal urges or lost somebody to addiction. Also, as explained, it shows what happens if you don't take your medicine and have severe mental illness. This is common with school shooters and or violent crime committers who aren't involved with terrorist groups.

Hell yeah. Hip Hop and Heavy Metal songs have to blast. I have to be by myself. I have to be in my home to get the best out of my abilities. And lots and lots of caffeine.

I am finalizing the next three books for the "422" series, also working on one of two spinoff scripts for television once this is done. I am currently shopping "Scandalous" to LA Executives, as two of my first four are already interested. You will see this on a streaming service, and I wrote the whole script myself!

Follow me on Instagram @warrensfinest or twitter @KingDannyRange or Linked In: Danny Range. But don't worry, you'll hear about me! I am receiving confirmation as we speak that this is a special project that will be on your TV screen. No arrogance, just honesty: Remember I told you so!