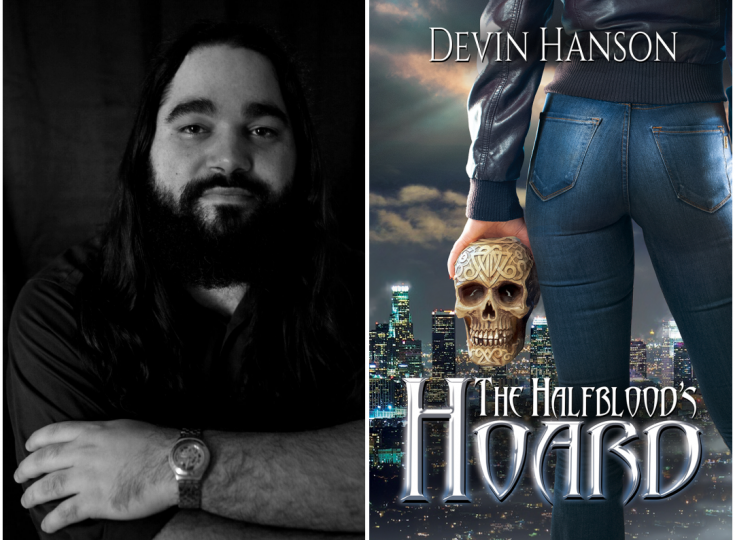 After a childhood spent programming computers and playing Dungeons and Dragons, Devin's career took a random turn to counseling. It was during his years as a counselor that he developed his insight into the human condition and renewed his interest in writing. As our Author of the Day, Hansen tells us about his book, The Halfblood's Hoard.

Please give us a short introduction to what The Halfblood's Hoard is about?

The Halfblood's Hoard is about a young woman who finds herself thrown into the world of the supernatural. Without giving away too many spoilers, she finds herself in possession of powers that let her go toe-to-toe with the hidden nasties in the world. It's a book about solving mysteries, both personal and in the course of her job.

Was there anything in particular that inspired you to write this book?

Inspiration comes from the most unlikely of places. In the case of The Halfblood's Hoard, the dedication says it all. Idle chatting with a friend suddenly plopped the idea full-formed into my head. The book is fully Angeline's fault.

Tell us more about Alex. What makes her tick?

I've always found strong female characters to be particularly interesting. There is more to strength than purely physical, though. More on this in the next question.

How did you go from programming and D&D to counseling and then writing?

Going from a computer guy to counselor is an unusual career change. Looking back on it, it's impossible to put my finger on any one decision that made the change happen. Life just conspired to make it that way. I'm glad it did, though. It was counseling that gave me the deep dive into people's lives, and showed me the strength normal people have in facing their day-to-day challenges, no matter what other problems they have going at the same time. Writing came as a natural next step for me. It gives me the opportunity to share some of the insights I've discovered, and maybe help someone find a way to deal with the problems they're facing in their own lives.

With Alex, I wanted to show how strength comes from within. Being able to tussle with the supernatural is only the beginning to what makes Alex strong. It was my experiences counseling that showed me where true heroism comes from. I wanted Alex to be a heroine, not because she can tussle with the baddies, but because of who she is as a person.

I've got a bit of a list. Besides counseling and writing, I'm a web developer and game programmer. I know six or seven programming languages. I was a professional graphic designer and a little bit of a graphic artist. I'm also a woodworker, though just an amateur.

The Halfblood's Hoard is the first book in a series. How do the other books in the series tie in with this one?

The world that The Halfblood's Hoard introduces is vast. There are dozens of adventures for Alex to have, both one-off escapades and greater story-arc plots. I've got at least six books planned, and I come up with two ideas for every one I manage to get down on paper. The second book, Shadow of the Ghoul, progresses Alex's story and cements her into her new role.

Why urban fantasy? What drew you to this genre?

It's a genre that I've always enjoyed. Ever since I saw Interview with a Vampire in college, I've been thinking of urban fantasy story plots. These days, I'm a little tired of the generic vampire/shifter fiction out there, so I wanted to spice things up and look at the genre from a new angle.

Does writing about paranormal beings and enigmatic scenes present any particular problems?

Yes! I'm a strong believer in doing my research. Part of the challenge I run into is in placing the supernatural into the existing world. Almost all the locations in the books are real places, and most I've been to in person. It's difficult keeping that realism while also writing fantasy. And speaking of research, my version of the supernatural world is based on passages from the Torah, the Bible, the Quran, and other mentions of angels and demons and djinn. I've had to become something of a theological expert in the course of building the world.

A bit of a mix. I don't have a written outline per se, just a few bullet points. I know where I want the story to go, and generally how to get there, but the details come as I write. It sounds very disorganized, but I have most of the book in my head. Really all I improvise on the fly is details of conversations and how fight scenes play out. It's not a method of writing that I suggest.

I'm a night owl. For the most part, I do my writing from 11pm to 4am. When I'm on a roll or am in the middle of a tricky scene, that might extend to 6am. I like it because nobody bothers me. My wife's asleep, my phone doesn't ring, nobody is on Facebook, etc. I can just buckle down, put on some music without lyrics, and get the words flowing. I try to write around 2000 words a day, but I always write, every single day, including holidays.

Wylde Fire, the third book in the Halfblood series! But also a new fantasy series, and I'm working on the plot for a LitRPG book. So many ideas, so little time.

My books are all on Amazon, and I'm working on getting them all turned into audiobooks. So far, the first two fantasy and the two sci-fi are on Audible, Amazon, and iTunes. The Halfblood's Hoard audiobook is in production. I've written ten books to date, in the sci-fi, fantasy, and urban fantasy genres. I'm always open to conversation on my Facebook page! I love to hear from readers. I also keep a blog on my website, devinhanson.com where I talk about writing and give some tips.