Doug Molitor - Sci-Fi Rom-Com with the Accent on Adventure

Doug Molitor - Sci-Fi Rom-Com with the Accent on Adventure
Posted on 31st of July, 2018 by Naomi Bolton 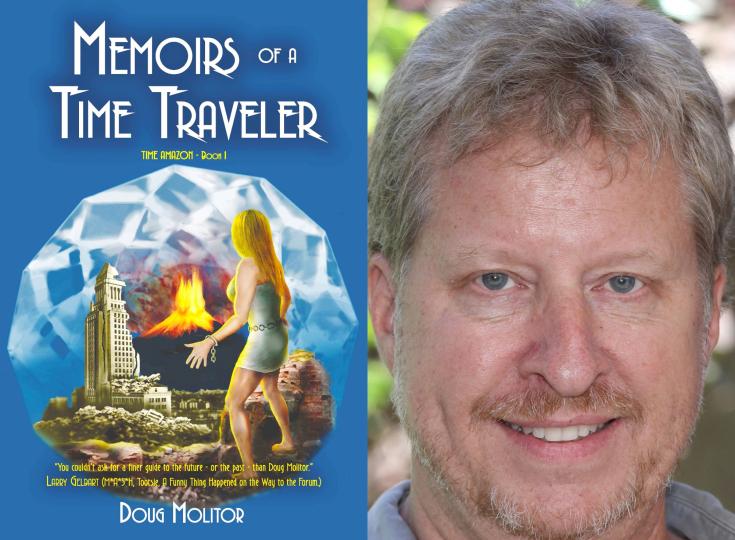 Doug Molitor is a TV writer who wrote for Sledge Hammer!, You Can't Take It With You, Police Academy, Slider, Young Hercules, F/X, Happily Ever After, X-Men, Bill & Ted's Excellent Adventures, Sinbad, Where on Earth is Carmen Sandiego?, Class of the Titans, Roswell Conspiracies, Sabrina and Beetlejuice. He has won two Environmental Media Awards and was nominated for the Humanitas Prize for Captain Planet. As our Author of the Day, Molitor talks about his latest novel, Memoirs of a Time Traveler

Please give us a short introduction to what Memoirs of a Time Traveler is about.

Memoirs of a Time Traveler is sci-fi rom-com with the accent on adventure: It's about Ariyl, a wild, amazonian tourist from 2109 A.D. who drags David, a straitlaced archaeologist of today, on a chase through time, to stop a psychopath whose thefts of crucial objects are changing history.

What inspired you to include a time traveling thief in this book?

I collect coins and antiques, and it struck me that a time traveler could own some truly awesome things...like the original draft of the Declaration of Independence. But if you collect a unique object like that in mint condition - if it disappeared right after being approved in 1776 - wouldn't that cripple the American Revolution? How would today be different if you took King Tut's gold mask? Lord Carnarvon might have died at a ripe old age, instead of being struck down by the mummy's curse. What if someone swiped the first draft of Hamlet, or the Holy Grail?

You have won several awards for your TV writing. What has the experience been like?

I was honored just to be up for the Emmy and the Humanitas. I know the nomination is the award...but I won two Environmental Media Awards back-to-back for writing Captain Planet...and I slightly prefer an award I can put on the mantel.

In which ways is TV writing different from writing fiction?

TV writing demands economy, speed and flexibility. A novel can have five or ten times the words; you can tell a much longer and more detailed narrative, with all the backstory that you develop for a character but have little time for in TV. You can put a reader inside a character's mind. In TV, you want striking visuals as well as dialogue; but in a novel you also go into touch and smell and taste...and you can wax poetic with the descriptions themselves. Best of all, in fiction there's no producer telling the writer that the story is too long, or the public will hate this, or that scene will cost too much to shoot. And you set your own deadlines. A novelist has a lot more power.

This book is really fast-paced, keeping readers at the edge of their seats. How did you pull this off?

Thank you! In TV, I was trained to bring conflict (emotional or physical) to a head every ten minutes or so. I start with long wordy scenes then prune the dialogue to the minimum I need. I like to give characters something physical to accomplish while they talk. I end chapters on cliffhangers, so the reader is eager to read on. But I do feel it's important to slow things down every now and then, and let your characters interact without a ticking clock or an exploding volcano rushing them along. That's when we fall in love with them.

Memoirs of a Time Traveler includes a crazy mix of themes, including Bronze Age swordsmen, modern-day Nazis, a steampunk world, Albert Einstein and more. Why did you take this approach?

Ariyl starts out a tourist, and at first, she just wants to visit marquee events in history. But her sticky-fingered traveling companion Ludlo steals things like Einstein's atom bomb letter to FDR, an item whose absence has a devastating effect on history. Memoirs (like its two sequels) is structured as a mystery, where David and Ariyl arrive in a badly distorted timeline, and must follow clues to figure out just what it was Ludlo took, and when...then try to undo the damage.

I do impressions. I'm planning to record the audio books of this trilogy, since it would be hard to find a narrator who can do so many well-known voices, ranging from Orson Welles to Mae West to Lon Chaney, Jr.

The book contains a couple of twists. Did you plan them all out before you started writing, or did some of them just "happen" along the way?

Most of the twists in this book were planned, but what to do with Orson Welles' lost masterpiece only came to me late in the writing: I saw a picture of a much older Orson puffing a big cigar. Suddenly, I knew how to put history back the way it was without making my hero do something despicable.

Why time traveling? What drew you to the theme?

Who doesn't want to know how the far future will turn out? Who wouldn't love to visit a fabled era in the past, or talk to a long-dead hero...or see a living dinosaur? Plus...when I was eight I saw The Time Machine. I was hooked for life.

Depends. I know where book 4 will end, but I have four major characters whose arcs I need to write, so I'm researching eras they will visit and historical persons they will meet. But if I get an idea for a great scene, I'll drop everything and write that first, and figure out later where, or if, it will fit into the book. On book 3, Revelations of a Time Traveler, I was writing to a deadline; by the end all the fun research was over and I was just grinding out two thousand words a day and revising as I went along. My favorite time to write is late at night - the world is asleep and I can get a lot done...if I can just stay off Facebook.

I enjoy finding the funny in situations. I'm a comedy writer and the Time Amazon books are comic novels. My favorite scene in book 3 isn't historical or sci-fi at all, it's just a dinner with David's family - who don't know he's traveled in time - which goes downhill with alarming speed.

I would not get along with Ludlo. He's cruel and devoid of conscience. Then again, he's a witty, erudite guy and would probably be a great dinner guest, if not for the risk that he'll kill you after dessert. David, my hero, is admirable, but obsessive and a bit clueless about others' reactions to him; he's too much like me for us to really enjoy each other. I like Ariyl best: She'd drive me nuts with her lack of knowledge (in 2109, people don't learn history, they just ask the global computer N-Tec.) But she's clever, brave, good-hearted, and can lift a man over her head with one hand...that's my dream girl.

Right now? I'm working on question 13. But later in the evening I'll be back on Book 4 in the Time Amazon saga, Chronicles of a Time Traveler.

I would love it if readers link up with me here: https://www.facebook.com/DougMolitorAuthor/

I post news of the Time Amazon series and my supernatural rom-com series Full Moon Fever; I also put up odd bits of found comedy, and every Sunday night, my three proposed entries for the New Yorker Cartoon Caption Contest. Please help me pick the right one: In ten years, I've gotten to second-place exactly once. My goal is to win the contest by 2028.