JD Mitchell - Captivating Fantasy With a Touch of Irish Folklore

JD Mitchell - Captivating Fantasy With a Touch of Irish Folklore
Posted on 23rd of May, 2021 by Naomi Bolton 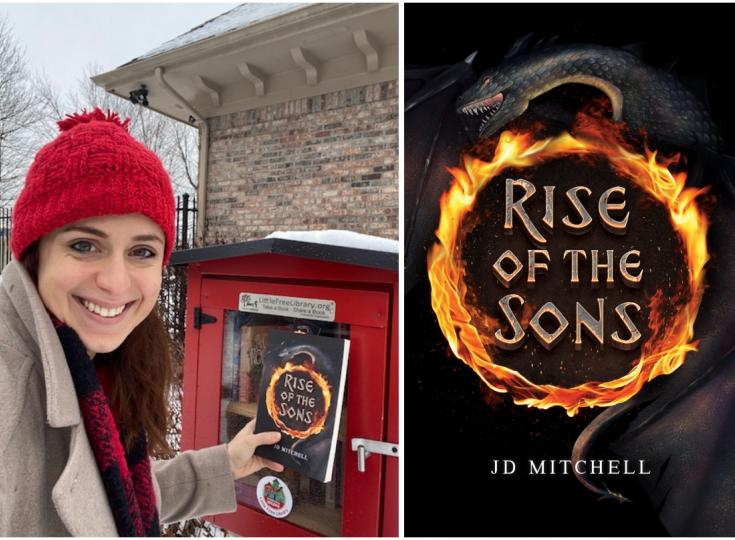 JD Mitchell is an Indiana native and member of the Indiana Writers Center where she’s able to share her inner nerd with others passionate about storytelling. Tapping her love of fantasy and mythology, JD released her debut YA novel, RISE OF THE SONS, and is working on the second and third installments of the series. When she is not writing, JD enjoys copious amounts of coffee, alternative metal bands, cheesy 90s action movies, traveling, and come to think of it... she enjoys all these things while writing, too. As our Author of the Day, JD tells us all about her book, Rise of the Sons.

Please give us a short introduction to what Rise of the Sons is about.

Rise of the Sons is a Young Adult fantasy about a teen girl, Ali McMillian, whose humdrum high school existence is shattered when she is attacked by terrifying creatures she can’t explain. Armed with sarcasm and a healthy dose of skepticism, her world is turned upside down as she realizes mythology is more than old tales.

As Ali discovers more about the unseen magical world around her, she discovers an old enemy—a trio of brothers known as the Sons of Carman—have broken free of their banishment and returned with a vengeance. Unfortunately for Ali, they want her dead.

Tell us more about Ali McMillian. What makes her tick?

I love witty and sarcastic characters. Probably because I’m not witty or sarcastic in actual life.

Ali is familiar with loss and abandonment, so she works hard to hide her emotions and keep people at arm’s length. Writing her character was fun because she is a vulnerable and awkward teenager, but has moments of strength that are driven by her desire to protect the few individuals she allows into her life. Also, the creative non-curse words her character uses are some of my favorite lines. As I work on books two and three of the series, I really let her unleash that side of her personality. It’s an area of research where I have a lot of fun.

This story was born out of a short story I wrote for my husband who has alopecia. For those of you unfamiliar with this term, alopecia is an autoimmune disorder that results in hair loss. I wanted to write about a hero who struggled with alopecia—Leigh is this character. He’s the high school heartthrob who is bald at age 17. For me, it was important to address the characters’ conflict with alopecia, but never let it define him. Leigh is incredibly kindhearted and friendly, and that is what I wanted readers to take away from his character.

What fascinates you about mythology?

Mythology, especially Celtic mythology, is dark and disturbing. For instance, in Rise of the Sons, I wrote about a creature called the sluagh or “host of the dead.” They are scavengers that prey on the souls of the dying. The stuff of nightmares.

Quote from Rise of the Sons. “It was a cloaked person. No… not a cloak. It had leathery wings. What Ali had taken for knives were enormous claws on its hands and feet. Strands of dark hair cascaded out of sparse patches from its scalp, framing what would otherwise be a gray human face except for the mangled dark beak where its nose should be. It was a bird-hominoid with black eyes.”

Can you imagine that creature crawling into your bedroom in the dead of night? No thank you. However, I enjoy writing about these strange monsters.

Then you have the Tuatha de Danann, an immortal race of druids with a rich history. It was fun to research these mythologies and build a fantasy world rooted in these stories.

My creativity spills into other projects. For instance, my grandmother taught me to sew and I’ve made quite a few quilts. I also turn my sister’s golf cart into various creatures for parades. My favorite was the “Shark Cart” for the 4th of July a few years ago, because Jaws is the 4th of July monster. That Shark was the length of the cart at took a lot of shaping with cardboard, which I covered with rolls of waterproof table covers from party tree. Plastic table covers are work just like fabric.

I also built a large decorative wall clock out of pallets which appears in one photo in this article.

Why Teen/Young Adult? What appeals to you about this audience?

Also, the YA genre is filled with wonderful fantasy stories I enjoy reading. Maria V Snyder and Holly Black are two authors I like. I also just started reading Aurora Rising, and I’m loving it! I’m behind on that one (I think it’s been out for a while now), but to me, it’s the teenage version of Firefly, which is a show I really enjoyed many years ago.

I found an artist on Reedsy named Gabrielle Ragusi. She is fantastic! I highly recommend her if you are looking for an artist.

Anyway, I started with a Celtic pattern of a dragon, and Gabrielle came up with several amazing designs. It was so hard to choose. In the end, I asked my nephews and their friends what image they liked the best, and that is the cover I have today.

Ali. Initially, she wasn’t emotional enough for my beta readers. I had to go back and rewrite some of her scenes. I’m happy for that exercise, because her character is developing as the series progresses and I’m loving where I take her in book two and three.

With Rise of the Sons, I enjoyed writing the scenes where monster’s attack. The entire scene with the sluagh was a blast, and the first scene with the dragon—who has a name, by the way—was fast-paced and tense. The dragon, Paiste, makes another appearance later in the series.

With the upcoming books, we really get to know the villains. My favorite character to write is Dub. He’s intelligent and dangerous, but you come to understand his actions. The dynamic which is built between Ali and Dub are my favorite scenes to write.

Are you a plotter or a pantser? Do you work out the entire plot before you start writing?

With book two and three, I needed to identify the major plot points before I started writing. Writing a sequel is harder than a standalone. There are themes and promises made in the first book that I have to honor. I also like a lot of action and quick writing, so I have to ensure I keep all the details and storylines straight.

Readers say that your scenes are very detailed, making it easy to visualize. How did you pull this off?

I’m a visual and kinetic learner which translates into my writing. I visualize every scene and problem as though it were a movie, and I like to explore every likely outcome for any scenario. It’s a habit from my day job. I’m always asking what the potential consequences are for action. For these stories, I decide if that obstacle or consequence is interesting. Sometimes the idea grabs me right away, other ideas have taken a year to develop.

Of course, once all of that is done, my writing group will tell me if a scene is working or not. And while we all want to think our first draft is amazing, those feedback notes are truly what makes the story better. Whenever I get feedback, my scenes become richer.

I wouldn’t say I have interesting habits, but I’m obsessive sometimes. The horse blinders go up and nothing stops me. Lately, I’ve been writing for one hour before work every day. Many of the greats had this habit, so I’m trying to emulate it. I’m also attempting to stop myself from going on two-week writing binges where I do nothing but work and write. It can drain my battery and then I have to force myself to write which is no fun.

I have a second—completely redone—draft of book two completed as of this week. I was unhappy with the first draft, so I joined a writing program out of the UK called The Novelry and started over. It has turned out to be a positive decision, and I believe it will continue to be a positive experience as I enter the editing phase. I’m much happier with some of the major plot changes and excited about the impact on the last book in this series.

I also have about 50% of the third book written. When I was writing book two, I realized I needed to understand some of the major scenes in book three. I wrote those scenes, then I used that knowledge to help shape book two as a set-up for the third installment.

Full transparency, I am not the best user of social media, but I’m trying. I’ve listed links below, but I’m old school. You can email me at: [email protected]