Jean Lowe Carlson - A Sweeping Epic, With Love, Magic, Battles, and Friendship
Posted on 4th of July, 2022 by Naomi Bolton 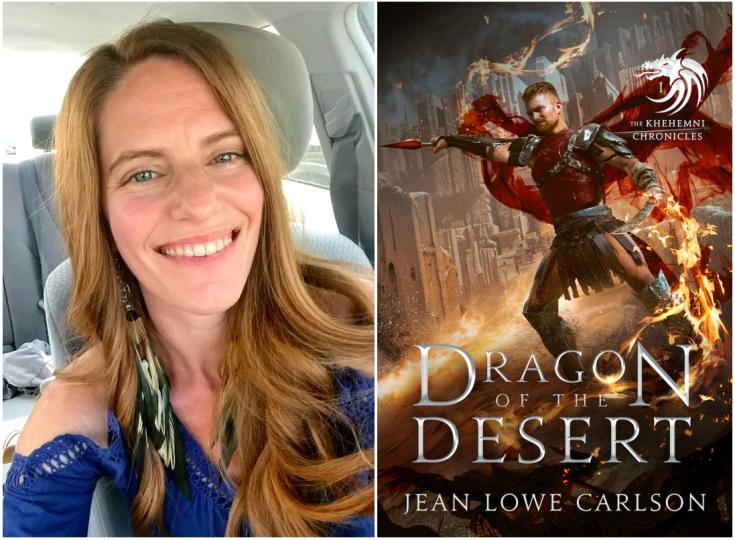 Amazon bestselling and award-winning author Jean Lowe Carlson writes epic and adventurous fantasy fiction. Her raw and extensive worlds have been compared to such fantasy greats as Robert Jordan, Brandon Sanderson, George R.R. Martin, Joe Abercrombie, and Patrick Rothfuss. Exciting, challenging, and passionate, her novels take the reader upon dire adventures while exploring deep human truths. In 2016, she was the recipient of the Next Generation Indie Book Awards Finalist medal for her dark fantasy "Tears".  As our Author of the Day, she tells us all about her book, Dragon of the Desert.

Please give us a short introduction to what Dragon of the Desert is about.

The story follows the prince of Khehem, Leith Alodwine, as he protects his city and desert home of the Thirteen Sun Tribes from an invading force. But a magical cabal called the Order of Alrahel to work behind the scenes to replace monarchy in his country with their own united rule, and Leith has pulled away from battle just when his people need him most – to engage Trials of Kingship the Order have set for him so he can ascend his rightful throne. He’s betrayed and the nation is thrown into chaos at a critical time as Leith’s own dangerous magic takes an ominous turn. The series features an ensemble cast and is told from a few different points of view; it’s a large-scale fantasy epic that will span six books eventually and the prequel tale to my Kingsmen Chronicles series.

This series tells the events of a thousand-year war that sets the scene for my Kingsmen Chronicles series. When I was writing book two of that series, Bloodmark, I became very interested in exploring the pre-history of how the Kingsmen and the Khehemni originally became enemies, and that’s Leith Alodwine’s tale in the Thirteen Sun Tribes.

Tell us more about Leith Alodwine. What makes him so special?

Leith is the son of kings from the Thirteen Tribes’ strongest and most warlike oasis of Khehem; but more importantly, he is a very strong carrier of the Wolf and Dragon wyrria (magic). This magic is created from conflict – the more conflicting emotions he has and the more dire situations he’s put in, the stronger it gets. You can imagine what that does to his power, even over the course of the first book! In the original series, the Kingsmen Chronicles, Leith’s tale is told as if he’s the enemy. But was he simply the most powerful mage of his time who caused important world events to happen? I think of his story like Alexander the Great – depending on what perspective you come from, he could be seen as a great visionary or a heinous conqueror. You be the judge. :)

I studied opera in college and went to med school after that, working as a primary care doctor for a while in Seattle. Writing has replaced all that now, and it’s a much better fit for me – very rewarding for a true introvert!

Magic plays a big role in this story. Why did you take this approach?

This has to do with the overarching theme of the entire saga, which will span 12-15 books eventually. Magic in my world is powerful and not to be taken lightly; depending on who wields it, it can do great things or bring incredible ruin. It can twist good people dark; this is a theme that comes back again and again, and is the big question for Leith – will his rising magic ruin him and his nation? Or will it fulfill a greater vision for the future, and prevent a worse ruin?

Yes, I have quite a lot of rules for my world, because I believe a good epic fantasy defines what magic can and can’t do, and I follow this principle. In my world, the magic system includes seven elements, seven different kinds of magic that all do slightly different things. The magical systems are based on perspective – they arise in a person because of the way that person views the world. So, for instance, if a person sees everything in terms of conflict, of attack and defend, they have a natural affinity for the Wolf and Dragon magic, which Leith does.

Yes, it takes so much time! I love dreaming up new worlds and different environments, but it takes so long to come up with so many of them that my epic fantasy demands. I can’t write these books quickly; I have some friends who publish epic fantasy novels every few months, but each of mine take a full year. But I am thorough in my details. These books are for people who really love deep immersion in new cultures and environments, like Robert Jordan’s Wheel of Time.

Ooh, good question! I think I would be a combination of characters, actually. Many of them have been written from different aspects of my own personality, or from archetypes that have been fully fleshed out so they’re not one-dimensional. But from this book, I think I would have to say Jennira Alodwine, Leith’s sister. She’s dedicated, strong-willed but level-headed, and fights a deep battle inside about her purpose in life, though she is deeply loyal.

This is book 1 of the Khehemni Chronicles. Can it be read as a standalone? How do the other books in the series tie in with this one?

This can’t be read as a standalone, people will have to read the whole series to get the story (when the rest comes out). In addition, if they want the full tale, they’ll have to also read the Kingsmen Chronicles, set 1000 years after the Khehemni Chronicles, and the as-yet-unwritten third series, which will complete the entire saga.

I test-write for a while. I take a vision I’ve had, or a dream, and follow it for at least ten chapters, asking myself questions like, Who are these characters? What are they trying to accomplish? What is the overarching feel of the world and how can I convey that? What is the magical system, and how does it play out here? That sort of thing. Then I step back and take a look at everything, and start to formulate a plot that will span the entire series, fleshing it out as I go.

I’ve loved fantasy from a very young age. My first favorite movies as a kid were Labyrinth and The Princess Bride, and my first favorite book was The Hobbit. And it all just continued from there!

I have to have no interruptions while writing, though I don’t mind noise like a busy coffee shop. But I have to turn off cell phones, and pause my internet to truly get words done. An average day for me has changed since I gave birth to my first child three months ago, but I like to write in blocks. If I’m really going on an idea, I write 5-6 hours a day for many days in a row to get it all down, until I reach a stuck point and have to plot more to continue.

I am working on a few projects for my other pen name, actually, which is Ava Ward (paranormal & fantasy romance). I’ve got a great series started about Viking dragon shifters, which is fun, though the first book isn’t out yet. But it features a favorite character from my Ava Ward Royal Dragon Shifters of Morocco series, which I’m looking forward to. More on that soon!