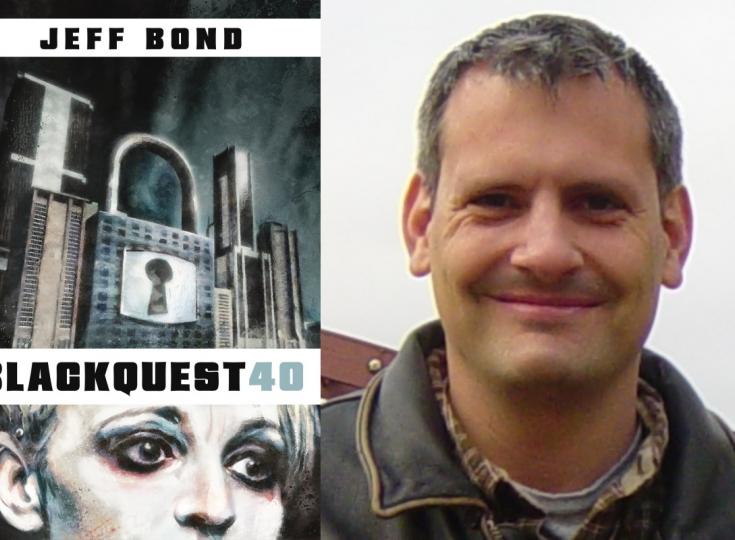 Jeff Bond is a Kansas native and graduate of Yale University. He lives with his wife and two daughters in Michigan, and belongs to the International Thriller Writers Association. As our Author of the day, Bond tells us about his book, Blackquest 40.

What inspired you to write about someone who gets locked in an office for "corporate training"?

Blackquest 40 is my attempt to tell a propulsive action story in a real-feeling corporate setting. I was a nine-to-five employee myself for many years (more like eight to seven, like everybody), and corporate culture has always interested me: the ways we treat each other, what happens to language and morals there. I wanted to portray typical business phenomena — rivalry, backstabbing, friendships of limited scope — inside a plot that kept readers turning pages furiously.

Tell us more about Deb Bollinger. What makes her tick?

Deb, the engineer at the center of the story, wants to do good. She pours her paycheck and spare time, and much of her non-spare time at Codewise Solutions, into an app she built called Carebnb, which matches up the homeless with hosts willing to share spare beds in their homes.

Your book features robots, Russians and tech entrepeneurs. How did you manage to pull it off while still making the story feel realistic?

I had to be careful choosing my characters and settings. Deb is an engineering rockstar from Google, a person with the natural skills to pull of the robots parts. And the tech industry has gotten so big, so global, that you can imagine a wide range of plausible thriller scenarios set there.

Blackquest 40 contains a lot of twists and turns. Did you plan this all out before you started writing, or did some of it just "happen" along the way?

A few wrinkles worked their way in, but for the most part, it stuck to my initial plan. I'm a big up-front plotter and usually have all my big reversals decided before I start drafting.

I'm the primary parent to nine- and seven-year-old daughters, which entails a whole bunch of secret skills. Two off the top of my head: serving breakfast in a car and ponytail-winding.

Why, would you say, is Blackquest 40 a perfect summer read?

Blackquest 40 serves up a fresh, original premise and a high-octane plot — with a protagonist whose voice ("gleefully snarky" - Kirkus Reviews) will make you root intensely for or intensely against her. Either way, you'll want to know what happens next.

Readers say this is a page turner that kept them riveted until the end. What are some tricks you employ in order to keep them wanting more?

The obvious technique is to end chapters with cliffhangers, but more generally, each scene should have conflict throughout. If I'm writing something and none of my characters are worried or actively pursuing a goal, it probably needs to get nixed or at at least shifted into a backstory passage.

Why thrillers? What drew you to this genre?

I started out writing more slice-of-life stories. (I hesitate to say "literary," because they weren't really concerned with form or language.) As I got more serious about writing commercially, I moved into thrillers because, well, that's where most of the readers are. I found that I really enjoyed writing more propulsive stories, and felt like there were still plenty of opportunities to write interesting, authentic characters within a genre framework.

That said, I have recently started a more literary series set in the fictional town of Franklin. The first entry is a short story called The Cleaner.

If Blackquest is ever turned into a movie, which actress would you like to play the role of Deb?

Unfortunately I'm way out of touch with younger Hollywood actresses nowadays — unless they do a lot of Disney. She'd have to have attitude. Maybe Ellen Page?

I like to be working on multiple books; while I'm revising one, I'll have a couple other stories I'm kicking around in my head. At that early stage, I just give myself space to imagine stuff that'd be interesting to have in the book. I literally start a document called "stuff" and jot ideas over the course of a few months: plot twists, characters, settings, a snippet of dialog. Later, I'll wrestle it all into outline form.

I am disciplined. When my kids aren't in school or at gymnastics practice, I'm doing things with them — so I have to make my writing hours count.

I have a couple books that're in the hands of literary agents now. One is a political thriller/murder mystery called The Pinebox Vendetta, and the other is a middle grade book called The Little Brother War.

In terms of what'll probably be available to purchase next, I'm planning to put out the first four (yes, four!) books of an action-adventure series in early 2020: Anarchy of the Mice, Dear Durwood, The Begonia Killer, and Astroplane. You can read excerpts from each and learn more about the series at https://www.thirdchancestories.com .

They can check out my official website, https://www.jeffbondbooks.com/, or the Third Chance site above for information specific to that series.