John Isaac Jones - A Construction Worker and a Lonely Housewife

John Isaac Jones - A Construction Worker and a Lonely Housewife
Posted on 22nd of December, 2016 by Naomi Bolton 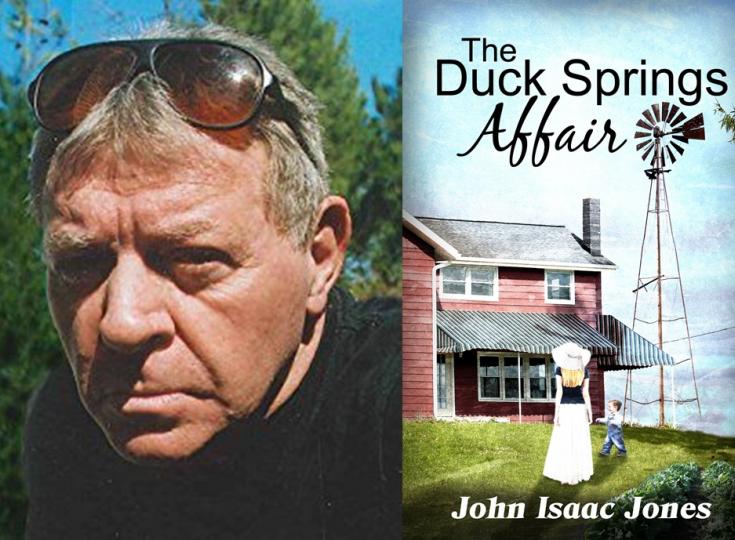 For over thirty years, John Isaac Jones used to work as a reporter for media outlets all over the world, but these days he is writing riveting books while enjoying his retirement. As our author of the day, Jones talks about his life as a journalist and how a construction worker inspired his book, The Duck Springs Affair and why he chose South Georgia as the backdrop for his book.

Please give us a short introduction to what The Duck Springs Affair is about.

The Duck Springs Affair is a star-crossed romance between Paul Hamilton, a construction worker who wanders from one affair to the next, and Cassie Carter, a lonely housewife and devoted mother whose long-haul truck driver husband is away most of the time. At first, their relationship is nothing more than a casual fling then, slowly but surely, as each plumbs the heart and soul of the other, it grows into much, much more.

Why did you pick a small farm in 1961 Georgia as the backdrop for your book?

I chose the South Georgia farm setting because I know it so well. As a child growing up in North Alabama and later as an adult in suburban Atlanta, I have an intimate knowledge of the woods, the fields, the seasons and the people of the rural Deep South.

Why the moral dilemma of an affair with a married woman?

To my mind, the best, most delicious drama grows out of stories in which the human heart is in conflict with itself. Agonizing soul-searches and heart-rending looks into the nooks and crannies of a character’s psychological landscape are my favorite topics for fiction.

In the summer of 1960, the year I graduated high school, the State of Alabama Highway Department finally paved the dirt road in front of our family home. Over the course of the project, I watched one of the construction workers have an affair with a married woman who lived across the creek from our home. Many times over the succeeding years, I wondered what had happened to their relationship after the project was finished. Did the worker go to the next job and forget her? Did she yearn for him after he was gone? Did they make plans to continue the relationship at a later date? In the late winter of 2014 and 2015, with these unanswered questions still swirling in my mind, I decided to write a book about how the affair ended. Thus, was born The Duck Springs Affair

How much, would you say, has your career as a journalist influenced your writing?

There is no doubt that my career as a journalist contributed mightily to my life and work as a novelist. Actually, the transition seems perfectly natural. A yen for words, a compelling yarn and a love of narration which evokes heart-felt emotions—whether fiction or non-fiction—is what I live for.

Tell us a bit more about Paul Hamilton's character. Why did you give him a damaged past?

I wanted the reader to understand that Paul, at the time of the story, was not consciously looking for a committed relationship. Secretly, he wanted to find the love of his life, his Annabel Lee, but he was in no hurry to give his heart to any one woman. He was having too much fun going from one fling to the next. Furthermore, as a construction worker moving job to job and state to state, he couldn’t afford to be tied down to one woman.

Which character's voice did you find the most challenging to write in?

Readers report that you made them laugh and cry throughout the story. How do you make your characters so relatable?

Evoking strong emotions in the reader is the very essence of quality fiction. Many times, in trying to determine the course of a dramatic scene, I will try to create dialogue and actions which evokes the strongest possible emotions. Once you have believable, relatable characters, you’ll be surprised at the depths of the emotions you can bring out.

What types of books do you enjoy reading for your own entertainment?

Mostly classics. Lately I’m reread Flaubert’s Madame Bovary, Hemingway’s For Whom the Bell Tolls, Zora Neale Hurston’s Their Eyes were Watching God and some of Faulkner’s short stories. During a recent trip to Mexico, I came across Cormac McCarthy’s Border Trilogy which I read. I have since read his No Country For Old Men.

In 1995, after the OJ trial ended in LA, I returned to the South and began a career in computer technology. I spent two years working for Hewlett-Packard in Atlanta, then twelve years as a network troubleshooter for a satellite communications company in Marietta, Ga. During that period, I managed to crank our two novels and a short story collection.

Do you have any interesting writing habits? Do you write during the day or evening, do you have a favorite writing spot?

I write best in the early morning. I get up around 7:30, make coffee, checks the markets and sit down to write. Once I get in the groove, I work until the creative fires start to languish. Usually that’s until around noon. Somedays, if it’s going really good, I can write until 2 or 3 in the afternoon, but that is rare.

How do you think you’ve evolved creatively as an author since you published your first book?

Writing is a craft and, like anything, the more you do it the better you get. As a journalist for many years, I developed a knack for stringing words together, but learning plotting, pace, characterization and theme development requires time, patience and lots of trial and error. After four novels and a book of short stories, I can look back at my work like a carpenter might look back at the houses he has built. Starting with two bedroom/two bath homes, I moved to six-bedroom split levels with swimming pools then to expansive mansions with twenty bedrooms, custom kitchens and chandeliered foyers.

At the moment, I am around half-finished on a crime novel titled “The Hand of God.” Set in south Florida in the mid-fifties, it is the story of a young black man who committed a deed so heinous he could not forgive himself. Hope to have it to my editor by February. At least, I promised it then.

My Amazon page is: https://www.amazon.com/John-Isaac-Jones/e/B008PR3DQ8