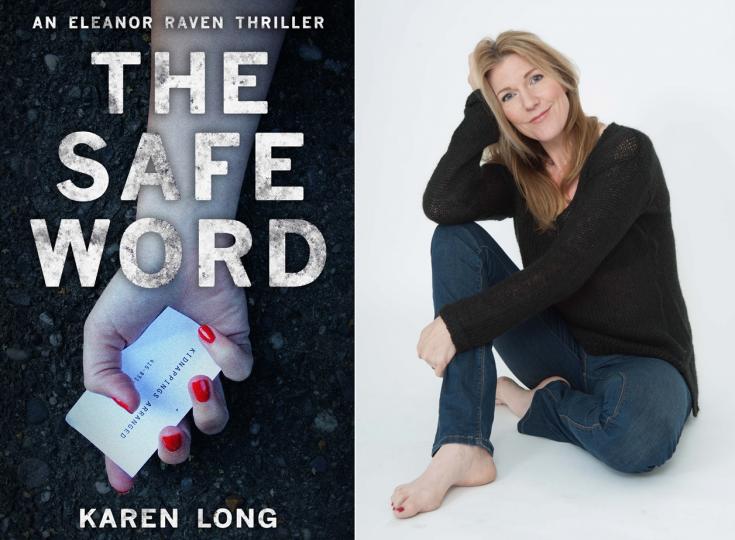 Karen Long is fascinated by the intricacies of a twisted mind - she writes dark mysteries, which are more "whydunnits" than "whodunnits." Long aims to keep her books as authentic as possible and would really go and seek out the experiences she writes about in her books in order to describe it as realistically as possible. As our Author of the Day, Long tells us about her interest in human psychology, reveals why she picked Toronto as the backdrop for The Safe Word and gives us some more insights into the character of Eleanor Raven.

What inspired you to write The Safe Word?

I read a small article in a Toronto newspaper, which detailed how a woman had been snatched off the street and bundled into the back of a van. Helpful witnesses contacted the police, who stopped the van, liberated the woman and arrested two men. The victim, far from displaying gratitude, was outraged at having her ‘Red Letter’ sexy kidnap day disrupted by the police. Now that’s a story!

What type of reader would like to read it?

I’d say The Safe Word is considered to be quite dark crime fiction, probably closer in taste to Mo Hayder, Thomas Harris and Jo Nesbo than Agatha Christie. I have a strong but troubled female protagonist, whose tendency to indulge in less than safe sexual practices adds to the conflict surrounding her. I love a good twist and believe that great plotting is the secret to a good read, as are complex and believable characters. The first two novels in The Eleanor Raven series are less ‘who’ and more ‘whydunnit’. Exploring the psychopathic mind is a big part of my writing, though ‘The Cold Room’ is all about the ‘who’.

Why write in the thriller/mystery genre?

Crime fiction is about the darkness of the soul. The very worst that can be done by and to another individual is the taking of life. I am interested in the intricacies of a twisted mind; the sort of minds that don’t share common human values and follow their desires and internal narratives with a total disregard to the lives and happiness of others. I think I have a darkness within me and need to explore these feeling through a dramatic medium.

Why did you pick Toronto as the setting for your book?

Toronto is a fabulous city of extreme temperatures, a liberal outlook on life and a people whose steady character belies their passionate interior. I stayed there on three separated occasions, while my husband worked. I’ve never lived in a city before and it was such a dynamic and secretive city, it made me feel as though I could grasp a version of a ‘place’ that eluded me in the UK.

Tell us more about Eleanor Raven. Who is she and what makes her tick?

Eleanor is a complex creature. She is contained, independent and confident in her abilities but the opposite is also true. She carries a burden of guilt from her childhood, which manifests itself in her masochistic sexual practices. She lives by the mantra that she never ‘judges’ yet she has judged and condemned herself for not recognizing the ‘signs’ that could have saved her school friend Caleb. I believe that this is essentially the human condition and why every central character’s struggle should be with him/herself. Eleanor Raven is a modern woman. She is sexually liberated and proactive, physically aggressive and defines herself through her career and not through family.

Tell us a little about yourself

I was born and raised in the English midlands, educated at Bangor University and taught English and Drama for fifteen years. During my teaching years I studied biology and neurology with the Open University and this interest in medicine, forensics and forensic psychology is reflected in my writing. My husband films all over the world, so a great deal of my time is spent abroad, where I indulge my love of wildlife. I’m a keen amateur naturalist with a deep and abiding love for birds.

Do you have any interesting writing habits? Favorite writing spot, most productive time of the day?

I am not, in any way, organized as to a writing routine. I harbor a deep sense of guilt regarding my glacially slow output and have to be completely free of distractions in order to get anything written. I have an office, which looks impressively and artistically chaotic to me, full of pictures, books, a stuffed crow and inevitably my three dogs. To everyone else’s eye it’s filled with the clutter of a disorganized and menopausal mind. I like to write in the conservatory, which has a great view of the numerous birdfeeders. Generally, I do write everyday and it tends to be late morning into afternoon.

Why did you name this book "The Safe Word”?

A ‘safe word’ is a mutually agreed word that, when uttered during a sado-masochistic session will stop the punishment. It features metaphorically, as well as literally in the novel.

I’m balancing writing a screenplay with preparing book three in the Eleanor Raven series, ‘The Cold Room’ for publication on May 8th 2017. I also write an occasional blog about my life and my interest in forensic matters. I’m a big fan of authenticity, so if my character has a fight, I go and learn how hard it is and how much it hurts (a lot!). Eleanor Raven uses a Glock .19 and I have to learn how to take one apart, reload and shoot it. It’s all great fun but essential if you want a reader to stay hooked. It really matters that my descriptions of a post mortem are accurate, so not only do I read and study a lot I make sure that I go watch and experience as much as possible.

I have an Author’s page on Amazon, where you can buy The Safe Word , The Vault and on 8th May The Cold Room. I also have several media pages.