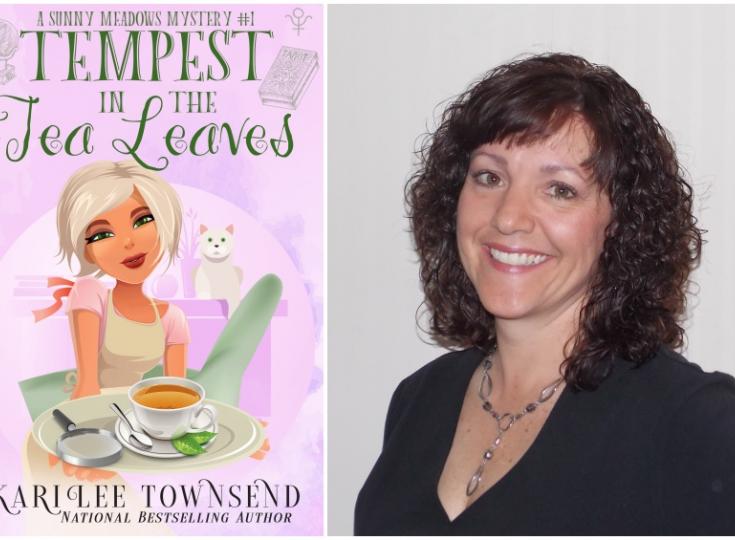 Kari Lee Townsend is a National Bestselling Author of mysteries & middle grade. She also writes romance and women's fiction as Kari Lee Harmon. These days you'll find her walking her dogs or hard at work on her next story, living a blessed life. As our Author of the Day, she tells us all about her book, Tempest in the Tea Leaves.

Please give us a short introduction to what Tempest in the Tea Leaves is about.

The series is about a woman named Sunshine Meadows who is psychic and uses fortune-telling tools to help her interpret her visions. In the first book, she gives a tea leaf reading to a frazzled librarian. The reading is disturbing, so Sunny warns the police, but the hard-nosed, handsome detective doesn't believe her. When the librarian winds up dead, Sunny becomes the number one suspect.

What inspired you to write about someone who is in the fortune-telling business?

I've always been fascinated by psychics, especially fortune tellers. I've seen other series that had a psychic as the lead, but I hadn't read any that were fortune tellers. I thought it would be interesting and fun to explore the various methods they use.

Tell us more about Sunshine Meadows. What makes her so special?

Sunny is an only child of a lawyer and cardiologist. They are wealthy and care about what society thinks of them, while Sunny shops at thrift stores and drives an old VW Bug with flowers on the side. They love her, but they don't believe in her ability and can't understand her desire to be a fortune teller when she could be so much more. She moves away from the Big Apple and decides to venture out on her own in central New York.

Why cozy mysteries? What drew you to the genre?

I love that every series has a theme and often has a pet. The small town atmosphere with familiar characters we get to see throughout the series is comforting. I enjoy adding a bit of humor and romance to my series and watching the characters grow and develop throughout the books. On top of all that, I get to come up with interesting mysteries.

Why did you pick the quaint town of Divinity as the backdrop for your story?

Divinity is a fictional town in central New York. I grew up in central New York, so I took little things from surrounding towns and created my own. I love the idea of old-fashioned street lamps, historical buildings and a park. Because the series is about a psychic, I tried to think of mystical sounding street names.

Readers say you'd need to be psychic to guess the identity of the killer in this book. How did you pull this off?

Cozy Mystery fans are very smart. I wanted my first attempt at the genre to be a success, so I spent a lot of time plotting. I always know who my killer is and why. From there I look at my victim and come up with a bunch of suspects, red herrings and clues. Throw in a few non-suspicious people, and I'm ready to start. Apparently it worked, because the book was nominated for an Agatha and a Reader's Choice award. Now the difficulty is in writing books that are just as good as the first so my readers won't be disappointed.

I love writing about Morty. He's a big, white cat with black eyes. He came with the house when Sunny moved in, and he let her stay. She's never seen him eat or sleep, and he moves very fast. She has no clue what he is, so she names him Morty--short for immortal. Morty has a hand in helping Sunny solve every murder.

This has been your debut novel. What was the experience like?

This was my debut cozy mystery, but I had written a few romance novels before that. Now I write mysteries and middle grade under Kari Lee Townsend and romance and women's fiction under Kari Lee Harmon. I wrote for many years before landing an agent, Christine Witthohn of Book Cents Literary Agency. Even then it took three years before she landed me two book deals within six months of each other. She's the only agent I've ever had and more like a best friend. The biggest takeaway is to never give up. This business is more about luck and timing than anything else. 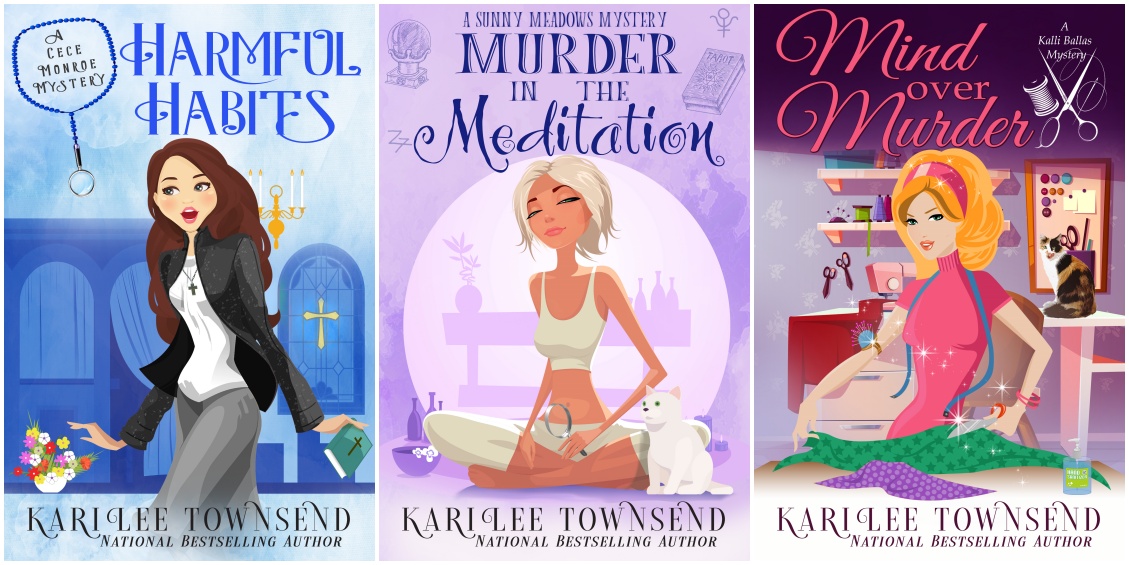 Tempest in the Tea Leaves is the first book in a series. Can it be read as a standalone? How do the other books in the series tie in with this one?

All of the books can be read as stand alones as far as the mystery goes, but if you want to keep up with the growing and changing relationships of the characters, then it's best to read them in order. Each book in the series showcases a different fortune-telling method. Same town, same characters, different mystery and different method.

I'm a mother of four children and wife of 32 years. When the kids were little, I wrote during naptime. That pattern stuck. Now that they're all on their own except my daughter who's in college, I have two big Samoyeds. We have a morning routine and then they nap during the day so I guess I'm still writing during naptime ;) I tend to write for a couple hours, eat lunch, then write for a couple more. I write Monday through Friday from 10-3 with evenings and weekends off for family time.

I'm actually working on the last book in the Sunny Meadows Mystery series, MURDER IN THE MEDITATION. It comes out December 28th. Murder in the Meditation | Universal Book Links Help You Find Books at Your Favorite Store! (books2read.com) Then I'll be starting a new cozy series called the Kalli Ballas Mystery series about a fashion designer who falls and hits her head, waking up able to read minds. The kicker is she's a germaphobe and can only read minds when touching the person. Her new neighbor is a Greek detective with a big sloppy St. Bernard, much to her and her prissy calico cat's horror. Meanwhile, she's adopted by a Greek family and the mamas are all about matchmaking these two. MIND OVER MURDER will be out early next year. I also have a new cozy series about an ex-nun who overhears a confession and vows, "What happens in the confessional, stays in the confessional," which doesn't make the Feds happy and the local detective even less happy when he's ordered to nun-sit. HARMFUL HABITS a Cece Monroe Mystery is out now. Harmful Habits | Universal Book Links Help You Find Books at Your Favorite Store! (books2read.com)

They can visit my website www.karileetownsend.com Kari Lee Townsend / Kari Lee Harmon - Home where they can sign up for my newsletter or follow me on all my social media links. I love to hear from readers. Thank you for having me. It's been fun ;)