Kasie Whitener - Writing About The Big Chill for GenX

Kasie Whitener - Writing About The Big Chill for GenX
Posted on 21st of April, 2020 by Naomi Bolton 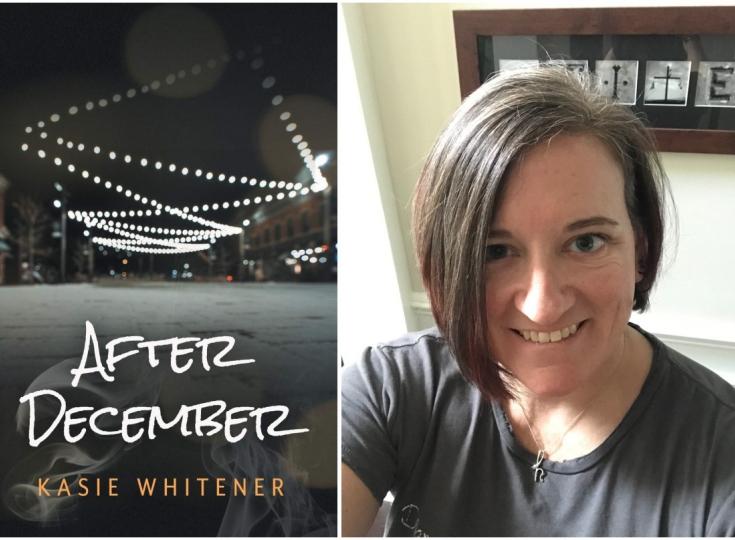 Dr. Kasie Whitener writes GenX fiction. At her core is fantasy romance and not-quite-getting-over-the-90s. She serves on the board of directors for the South Carolina Writers Association and is a member of the South Carolina Council on Humanities Speakers Bureau. Dr. Whitener has presented workshops for the Bowling Green State University's Winter Wheat Literary Festival, the Pat Conroy Literary Center, and Fairfax County Public Library. Her short story "Cover Up," won the Carrie McCray Prize in 2016 and other stories have appeared in Spry, Kairos, and The Petigru Review. She is founder & President of Clemson Road Creative and a lecturer at the Darla Moore School of Business at the University of South Carolina. Happily married to her best friend Charlie and crazy-proud mom to the one-and-only Hollie, Kasie reads voraciously, plays golf, and cheers for the Clemson Tigers. As our Author of the Day, Whitener tells us all about her book, After December.

Please give us a short introduction to what After December is about.

Brian returns home for a week because his best friend committed suicide. He and his friends drink and smoke and fight their way through their initial grief compounded by leftover tension from Brian’s previous visit and the distance that’s grown between them. Brian is in search of forgiveness though he’s pretty sure he doesn’t deserve it.

Tell us more about Brian Listo. What makes him tick?

Brian is a typical 22-year-old in the 90’s with a limited worldview. He is frustrated by his own limitations and the limits of his age and the expectations of others. He is selfish and moody, kind of a dick but good enough in the right ways for people to put up with him. Brian is at a disadvantage in this story because we only see him for the worst six days of his life. He wants redemption and he wants to be a better person, he just isn’t really sure how.

Why did you pick the Northern Virginia suburbs of 1999 as the backdrop for this story?

Write what you know. I grew up in Herndon and returned to that area repeatedly during college in the late 90s. It’s familiar terrain. There’s a complacency in the suburbs, a sense that it’s safe when it isn’t, a belief that there’s an opportunity when really it’s suffocating. It’s a competitive environment, one that fosters an over-inflated sense of self-importance. Brian’s selfishness isn’t that surprising to people from there. We all knew a Brian.

Why the focus on GenX fiction? What drew you to this genre?

I don’t know how to not write GenX. It’s who I am. Lately, the distinction between the GenX value system and the two bigger generations that dominate the workforce, society, and entertainment, has been on stark display. I think history will see GenX as a kind of Lost Generation in that we processed trauma from the Cold War, the Challenger, and AIDS to 9/11 and the 2008 Recession and now COVID-19. We have a kind of resilience that isn’t denier or snowflake. I’m continually impressed with our willingness to change and adapt. The central themes in all my stories are GenX themes: adversity can be physical, economic, emotional, or all three; friends are family you choose; no one does the work for you, no matter how much you pay them or beg them; in the end it’s your deeds that matter, not your prayers and not your words.

I’m a ninja. Only joking. But how cool would that be? I’m a swimmer (like Brian), and into politics and puzzles. I suck at poetry but I love an art museum and am always, always up for live music. Oh! I can tie a cherry stem in a knot with my tongue. It’s an underrated skill.

I looked into bipolar disorder and how it was being diagnosed and treated in the 90s. Tony’s illness is loosely based on a friend I had in college that suffered the same kind of undiagnosed depression. We were not as aware of mental health symptoms as we are now. And the drug research. I’ve never done more than a few bong hits, so I relied on beta readers and more experienced recreational users to judge whether I gave accurate depictions of being chemically high.

Some readers say you have an uncanny craft for writing male protagonists in the first person - how do you pull this off?

I only have two male protagonists in my portfolio and they’re both alternately accused of being too feminine and complimented for being remarkably accurate, so I don’t know that it’s a skill or just some readers’ perspectives. Brian and Blue (the vampire in a forthcoming title) are just themselves and I just write what they tell me to write (she said, sounding like a total lunatic).

What, would you say, are the biggest differences between the nineties and today?

Social media by far. It does three things: 1) allows us to falsely represent our emotions and therefore exaggerate them or minimize them, 2) it connects us where in the 90s we were able to completely disengage, that’s nearly impossible now, and 3) it makes us voyeurs. When Kurt Cobain said, “here we are now, entertain us,” someone took him literally, put us all in one place (Instagram) and gave us an endless scroll of other people’s lives to peep on.

I think Jason and I could hang out. He’s my romance novel character: hot, athletic, genuine and sweet, but under appreciated. I think Tabby and I would probably have words. She’s new to this group and she gets her perceived authority from her position as Joel’s girlfriend. She’s mean to Brian and hard on Kacie and she only tolerates Chris. I wonder (a lot) why she’s even there. Oh, right, dramatic tension.

Yes. When we moved to Columbia, S.C. in 2012, I made friends with a more diverse group than I’d been friends with through college and the first few years out of school. I was reminded how our Herndon crew was so ethnically diverse. My best friend was biracial and we hung out with African Americans, Filipinos, Puerto Ricans, and Latinos. Mentioning Tabby’s ancestry and Chris’s race are narrative choices I made in recognition that the Herndon of the 90s was an inclusive and diverse place to be. At least that was my perception in our school and in our group of friends.

Start marketing the book earlier (that’s to my 40-year-old self) and work sooner on this fiction thing (for my 30-year-old-self). I’ve always been a writer, but I haven’t always written. And it take a lot of writing to get good at it. I’m still not as good as I want to be but I keep getting better. I should have been practicing all along (that’s to my 22-year-old self).

Are there typical days anymore? I used to get up early – like 5 a.m. – and write for two hours. Now I sleep in but I still write in the mornings. It’s my most productive time of day. I participate in NaNoWriMo every year so I got into the habit of generating 2000 words a day. I still manage that count most days Monday through Friday. But it’s for a variety of things, not all fiction. Midday I read and in the afternoon I revise and edit. I’m a big believer that revision is where the real work is done. So drafting is always done early and frantically then revision is slow and purposeful.

I’m finishing the first draft of Before Pittsburgh which is a sequel to After December and takes place between the last two chapters of the book. The central question from my book club meetings on After December is “what happened to Brian in those three years?” So that’s the book I’m writing now. And there’s a vampire novel being revised and soon to be queried if any agents are looking for a GenX take on that genre.

Every Tuesday I host the Tweet chat #wschat at 6 p.m. via the @WriteOnSC handle which is the social media property for our radio show, Write On S.C., which airs on Saturdays at 9 a.m. EDT on makethepointradio.com. I have an author’s Facebook page and my fan group is Teddy Ruxpin’s Book Club. Sign up for the email list and get a free short story about a different Brian and a hot one-night-stand in the 90s. My website is kasiewhitener.com and you can get to all the other things from there. I also blog about the 90s and GenX and hot skater boys like Brian Listo there.