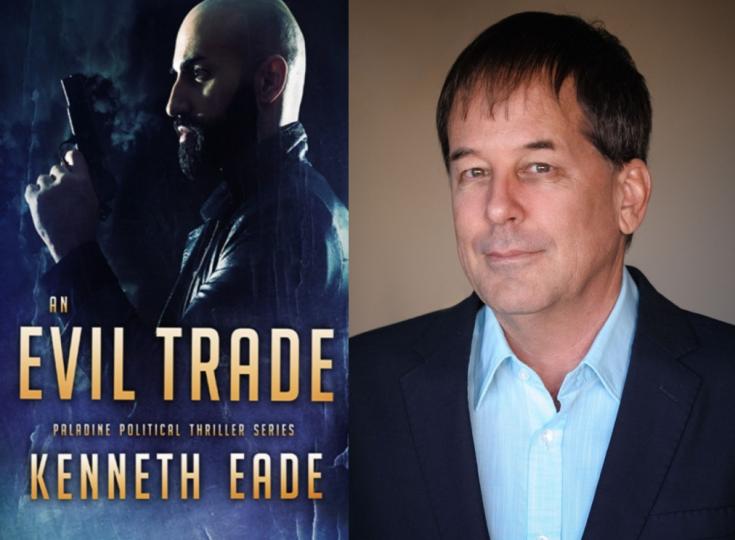 Described by critics as "one of our strongest thriller writers on the scene," author Kenneth Eade, best known for his legal and political thrillers, practiced International law, Intellectual Property law and E-Commerce law for 30 years before publishing his first novel, "An Involuntary Spy." Eade, an award-winning, best-selling Top 100 thriller author, has been described by his peers as "one of the up-and-coming legal thriller writers of this generation." He is the 2015 winner of Best Legal Thriller from Beverly Hills Book Awards and the 2016 winner of a bronze medal in the category of Fiction, Mystery and Murder from the Reader's Favorite International Book Awards. As our Author of the Day, he tells us all about his book, An Evil Trade.

Please give us a short introduction to what An Evil Trade is about.

An Evil Trade is the fifth installment of the Paladine Political Thriller Series. In keeping with past works, I have weaved real-life issues like terrorism and illicit organ trafficking into a twist-filled narrative.

What inspired you to write about an assassin of jihadist terrorists?

The character was inspired by a reader of mine, actually. The reader had served with Special Forces in the 80's and had actually seen operatives like this in action, serving the government. Together, we speculated what would happen if a government-trained assassin tried to rejoin civilian life. How would he cope? What would he do to survive, and how would he interact with others?

Tell us more about Robert Garcia. What makes him so special?

Robert Garcia is an anti-hero, an unforgiving hunter of jihadists best known by the moniker “Paladine,” a reference to the public’s perception of his service as a modern-day paladin whose sole mission is to eradicate evil. But in Robert's world, he is not on a terrorist killing mission. He is just completing his next assignment. Robert's humanity begins to creep back in when we see him actually care about a woman and dirty old stray dog (in book one) and he actually falls in love in Installment 3 (Traffick Stop).

Who is Ayisha Cullen and what makes her tick?

Ayisha Cullen, like Robert, is half-Arab, and speaks Arabic. She is also a deadly assassin. Her sister, Zia, committed suicide after being rescued from ISIS, and Ayisha mounted a revenge campaign to find and execute the ISIS jihadis who had sold her sister into a life of sexual slavery. She is often assigned to assist Robert by her employer, but he is wary of trusting her in the field because, to him, this is a business, and emotion can only be dangerous. To her, she must always have a cause to prosecute.

How much research did this book require from you to make it feel so authentic?

Every book in the series requires hours and hours of research. The type of weapons used, the historical settings, the real-lie events Robert is injected into. Then I creatively explore the what-ifs. What could happen if....

I am a secret agent. No, just kidding. I am a lawyer and retired from my regular practice in 2014 to write. Now I also advise a website that helps Amazon sellers with their Amazon policy issues.

Why the ISIS human organ trade? What drew you to this topic?

Starting with the second book in the series, I have been focusing on ISIS, and how such a terrorist organization became an actual state (the caliphate). I began to expose their origins, and their funding methods, which included charging refugees their war acts helped to create, for passage, sex slave trafficking rings, and killing people to harvest them for their organs, which they used to fund their operations. They impressed me as a truly horrible and reprehensible organization and I wondered why established governments, with all their resources, did not do more to stop them.

This story was originally written as a mission of Robert Garcia to attack the ISIS organ trafficking industry which, among other reprehensible and evil practices, helped fund the existence of ISIS and its terrorist military. Since I started working on the novel, however, a racial, ideological and economic divide among people in the United States has come out into the open, partly because of the rise to power of an unlikely candidate, Donald Trump, who professes himself as the working man’s answer to the reestablishment of the middle class. it is there where the plot takes a huge turn.

Readers say this is a fast-paced page-turner. How did you pull this off?

All of my books are dialogue-driven and full of action. They also have a realism to them. These two things are the magic of them. People say they feel like they are watching a movie when they read my books.

Every character is interesting, but Robert Garcia, aka Paladine, was the most challenging to create, and to keep him interesting and evolving has been a constant challenge.

What drew you to the political thriller genre?

After my first novel, An Involuntary Spy, which is a political thriller, I concentrated on a legal thriller series, which has some cross-overs.

I have to have a passion for writing. I never get writer's block because the stories are in my head. The challenge is sitting down to write them with all I have going with family (my baby girl) and a full-time job.

There really is no average writing day, actually. I have to have complete peace to write.

Now, I am working on the twelfth installment of the Brent Marks Legal Thriller Series, based on a true story. It is called, "Bad Company."

They can see my author profile on Amazon at https://www.amazon.com/Kenneth-Eade/e/B00EWT89RG?ref=sr_ntt_srch_lnk_1&… or my website, kenneteade.com. I also am happy to discuss the books with any reader by email, at [email protected].