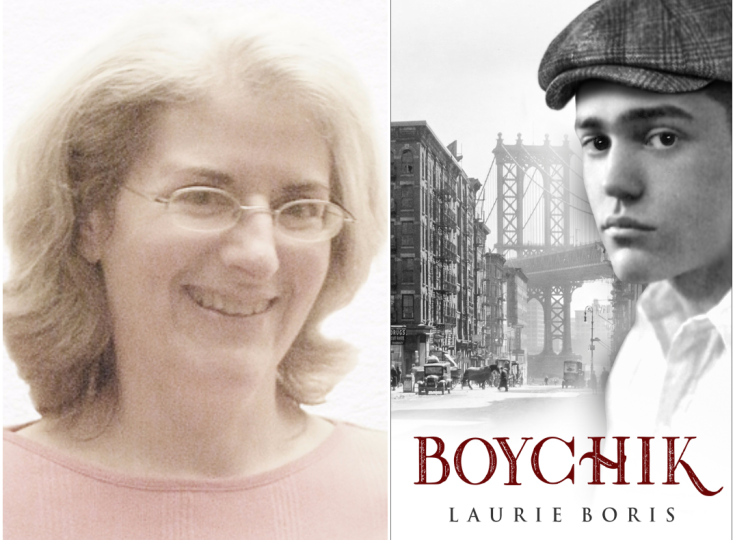 Laurie Boris has been writing fiction for thirty years and is the award-winning author of nine novels. When not playing with the universe of imaginary people in her head, she enjoys baseball, reading, and avoiding housework. She lives in New York's lovely Hudson Valley. As our Author of the Day, she tells us all about her book, Boychik.

Please give us a short introduction to what Boychik is about.

Boychik is about Eli and Evelyn, two seventeen-year-olds in Depression-era Brooklyn, who are from different social classes and on the cusp of figuring out what adult life holds for them. They are both struggling with the weight of family expectations, in different ways. But when they unexpectedly meet, they begin to think seriously about their futures—and the risks and perils of forging their own paths.

What inspired you to write about a deli man's son and a mobster's daughter?

The deli man’s son has been in my subconscious for quite a while. Some of my ancestors worked in the food industry, some back in eastern Europe, and some took their skills to America when they came here. The first scene I wrote for this book was about Eli in the basement with his father, making the corned beef. A forthright young woman like Evelyn seemed a good foil for him. I also wanted to see how she would rise to this challenge. She doesn’t like what her family does, but how do you handle that? How do you justify that? When the clothes on your back and the food on your table and the roof over your head have come from bad deeds?

Tell us more about Eli Abramowitz. What makes him tick?

First and foremost, Eli is devoted to his family. He works during the day with them in the deli, and the whole family lives in the apartment upstairs. But he loves to write, and he loves going to the movies. In his dream mind, he wants to be a great screenwriter, but that would mean leaving his family.

What makes Evelyn Rosenstein so special?

She’s a young woman who was born into a household where her parents had to squeeze every penny, but then her father starts making a lot of money and they move into an upscale neighborhood. Even so, she retains her empathy for people who are going through hard times and wants to devote her life to doing good. This is not easy for her, because of her father’s chosen profession, and something she struggles against throughout the story. But she is ever hopeful.

Why did you pick 1930's Brooklyn as the backdrop for your story?

The Great Depression-era in America is replete with stories about resourcefulness. It brought out the best and the worst in people. As a writer and reader, it fascinates me. I chose Brooklyn because of my family background, because it seemed like a microcosm of what was going on in the country: cultural and class conflict, poverty, while some profit from the misery of others and a booming trade for mobsters.

I did a ton of research! I studied trolley maps and fashions from the time period. I boned up on my movie history. I looked at all the images I could find of the various physical locations in the story. I met up with my “foodie” neighbor and talked about the delis she remembered from her childhood, and how lox was made. But my most important research was from my parents. Both of them grew up In Brooklyn in the 30s and 40s, and they told me stories—of the games they played, of the gangsters in the neighborhood, of making do during the Depression, of the expectations of the time. That was like a treasure for me – spending time with them AND learning about the background of the story.

Clashing cultures are a big theme in this story. Why did you find this important to write about?

I didn’t consciously choose that as a theme, but I like working with the conflict those clashes produce. It’s a rich source of material for fiction. It’s fascinating to watch how different characters react to it. Some with disdain, some with interest, some with curiosity or compassion, some with outright fury.

The food. I love writing about food. Also, the scenes between Morris and Evelyn. She so enjoyed needling him, and it was fun writing their dialogue.

I worked with a designer who had done the cover for The Kitchen Brigade. For Boychik, she came back with a lovely design using the Brooklyn Bridge as a backdrop, and I really liked the way it captured the time period. There was also a picture of a boy on the cover, and I happen to mention that I had a picture of my grandfather at about that age. When I sent them a copy, they were very excited and wanted to use it. My father, a photographer, did some touchups on the image and the designer took it one step further. It worked out wonderfully.

Readers say the characters are richly drawn and relatable.  How did you pull this off?

One of my favorite parts of writing fiction is getting deep under a character’s skin. I get to know them outside of the actual writing. I let them speak; I listen. Often I do a lot of background character work before I write the story.

I get most of my writing ideas while I’m out walking, so I carry index cards and a pen. When I’m actually sitting at the computer, mainly in the morning, I need total silence. Fortunately, I am lucky enough to have a writing room with a door that closes.

A sequel to Boychik. I need to answer some of the questions raised in the first book—if just for myself!—and it’s a lot of fun working with these characters again.

You can learn more about my work at laurieboris.com. I also post the occasional piece of flash fiction there. You can also find me on Twitter (@LaurieBoris ) and check out my books on Amazon (https://www.amazon.com/Laurie-Boris/e/B005I551QA ) Thank you for letting me visit!