Melody Felix-Prieto - If Angels Lived Openly Among Humans
Posted on 17th of June, 2020 by Naomi Bolton 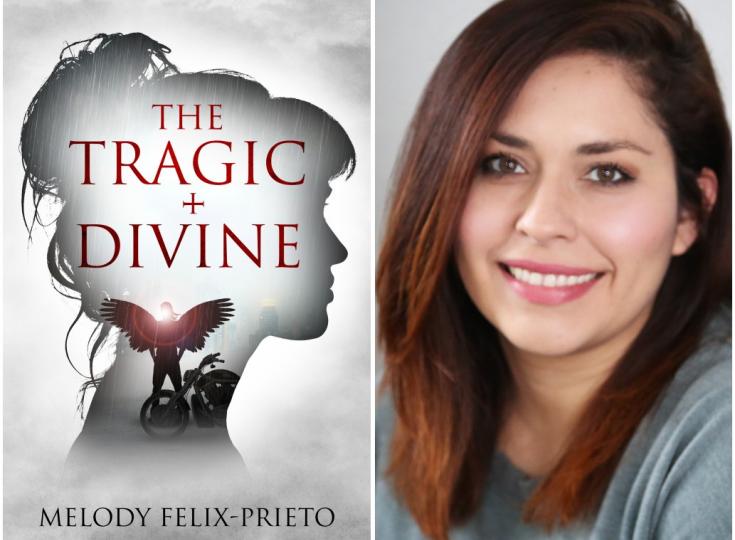 Melody Felix-Prieto lives in Georgia with her husband and two children. When she isn't writing, you can find her taking photographs, editing video projects, or watching movies. The Tragic + Divine is her debut novel. Visit her online at www.melodyfelixprieto.com. As our Author of the Day, Melody tells us all about her book, The Tragic & Divine.

Please give us a short introduction to what The Tragic & Divine is about.

In The Tragic + Divine universe, angels live openly among humans. Many people do not like them, especially those who live in small conservative towns. The story revolves around a teenage girl named Alexis who lives in the rural town of Dixon, Georgia. Her world is shaken when bad-boy angel, Milo James, enters her life.

What inspired you to write about a human and a fallen angel?

Because the YA market was over crowded with vampire books! Joking. Ever since I was a little girl, I’ve always been fascinated by the story of the Nephilim, or at least the very short verse about the Daughters of Man and the angels. I always felt their story was never fully explained and the idea of human-angel relationships fascinated me. I knew there was a love story in there so I decided to write a modern version of what an angel-human relationship would look like in the 21st century.

Tell us more about Alexis Minerva. What makes her tick?

Alexis Minerva is a hard-working young girl who doesn’t take crap from anyone. She does well in school and stays out of trouble. Her number one goal is to move back to Los Angeles to pursue a career in film and get out of Dixon.

Who is Milo James? What makes him so special?

Milo James is an angel who lives in Atlanta. He’s your typical bad-boy; enigmatic, charming, dangerous, drives a motorcycle, wears leather, but unlike many of the other angels living on Earth, he has a good heart and doesn’t treat girls like crap. He’ll do whatever it takes to get close to Alexis.

Why did you title this book "The Tragic & Divine”?

The book was titled after a song called THE WRETCHED AND DIVINE by Black Veil Brides. I felt the lyrics of the song were appropriate for the book and perfectly embodied the story. After making a few changes, I settled with THE TRAGIC + DIVINE.

Alexis' sister got mixed up with angels and it did not go well. Why did you give her this background story?

To serve as a cautionary tale for Alexis. Throughout the story, Alexis hates the angels because of what happened to her sister; this causes tension between Milo and Alexis.

“I invented the bad-boy.” - Milo James. I love this line. If you think about it, the angels in the Bible were the first bad-boys recorded in history. They ran around causing havoc among humans and impregnating human girls.

“Write what you know.” A good filmmaker friend of mine gave the advice back when I was 18 after I decided to pursue a career in film. Most of the story in THE TRAGIC + DIVINE was inspired by real life events that happened to me as a teenager, and many of the characters in the story were inspired by real people or a combination of friends I had back in high school.

The Tragic & Divine is your debut novel. What has the experience been like so far?

To be honest, the story was never meant to be a book. I had originally penned the story in the year 2000 as a screenplay, I had no intention in publishing or writing it as a novel. The only reason I wrote it as a book was to sharpen my writing skills and just to see if I could do it. My husband convinced me to publish the book and it has been an emotional rollercoaster ever since! I went through a lot of self-doubt because I had no idea how to write a book, I was afraid people were going to hate it, afraid no one would read it. In the end, the sense of accomplishment I felt when I saw my hard work wrapped with a beautiful cover made the three years I spent writing and formatting so worth it!

Unlike many writers, I like to write very early in the morning (around 6 or 7a.m.). I can’t write at night because I feel like the energy I picked up throughout the day muddles my thinking. I’ll write in 2-3 hour sessions if I’m home and don’t have any work. I stop when my husband gets home from work. I don’t write after 5pm or on the weekends.