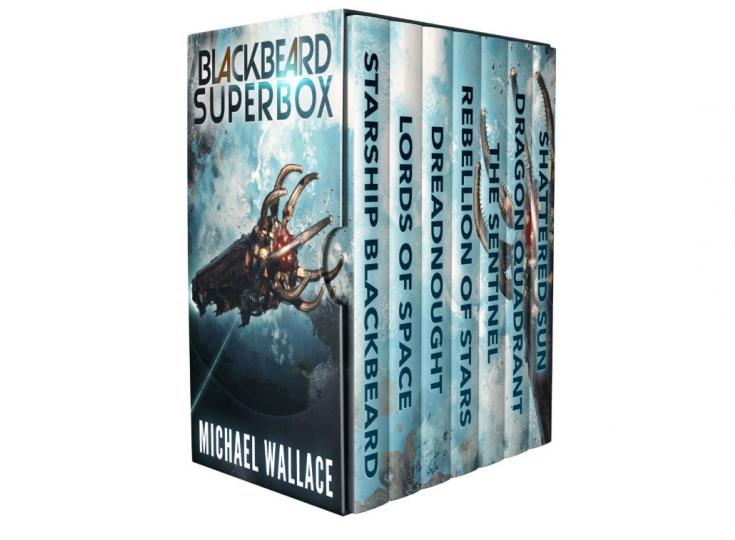 The bestselling STARSHIP BLACKBEARD and SENTINEL series, now in a complete compilation for the first time, is 1,500 pages of space battles, alien wars, and interstellar politics.  As our Author of the Day, Michael Wallace tells us all about this box set.

Please give us a short introduction to what your Blackbeard Superbox is about.

In my universe, humans spread out from Earth in the Great Migration, settling a string of several dozen star systems, and encountering alien civilizations along the way. Five hundred years later, humanity is fractured, with one powerful colony being the Kingdom of Albion, who has been expanding at the expense of an ancient, noble alien race called the Hroom.

Albion is beset by enemies: lawless pirates and raiders, alien death cults, and most importantly, treachery from within. Albion has fought several victorious wars against the Hroom, but there are factions on both sides that want to end the war and unite against even greater threats from without.

Tell us more about Captain James Drake. What makes him tick?

I wanted to start with someone who was a bit of a stiff aristocrat, a royalist, who has been betrayed. He goes rogue with the help of his loyal crew. I thought I’d then have the crew become pirates, maybe a little bit like Firefly, but in a battle cruiser capable of dishing out punishment. However, I underestimated his willpower and his loyalty to the crown.

Instead, Drake fights to clear his name and ends up back in command as massive wars with alien civilizations break out. The deeper into the series the story progresses, the more Drake realizes his true mission is to unite all civilized people, human and alien alike, against enemies that would exterminate them.

What inspired you to create this series? Did you plan to make it into a series from the start?

I knew it was going to be at least four books when I started, but the response was great, and we writers tend to find motivation when the readers are motivated to read more. The universe with its alien and human factions was rich enough that the stories tended to write themselves.

Some of the fun, over-the-top space opera elements ended up being the most enjoyable to write about. I love coming up with strange ecosystems on alien planets, and have especial fun coming up with bizarre creatures that want nothing more than to eat humans. I had just as much fun with my human and Hroom cultures, and playing around with the different way things might develop.

Your books feature space battles, alien wars and interstellar politics. How do you keep track of everything?

That’s really difficult, to be honest. Battles in three dimensional space are really hard to keep track of, especially since I’m trying to describe them in such a way as to give the reader a visual picture. As I write, I keep a bible of names, ships, planets, and other things, and I go back and refer to it often. I have a cast of revolving characters, but individual books and series may focus on different elements. As a result, it may have been some time since I last brought a warship or navy captain into play, and I want to be consistent.

I’m lucky to have an editor who can catch errors, point out that a character had an inconsistent backstory, or that I had warship in one solar system, only to have it appear magically in the middle of a separate battle elsewhere.

I speak Spanish and French, and have traveled a lot. I’m always trying to puzzle out how different cultures might develop, how they might interact with each other, and the like. This is probably the most serious part of my books.

Some readers compare your Blackbeard books to stories from the old Colonial sailing days. Was this your intention?

I honestly started with the idea that I wanted to have warships that were forced to slug it out at close range, not hitting each other with lasers from a million miles away. More like old battleships than anything else. It just seemed more fun and exciting.

Working back from there, I came up with energy-absorbing armor that made it necessary to use kinetic weapons: cannons, missiles, etc. The warfare element is definitely space opera adventure, not me trying to puzzle out the science.

Among the wealth of characters in this boxset, who was the most difficult to create?

The opening book of the second series of the box set, The Sentinel, deals with a group of people on an immobile battle station who were hidden on the front lines and ordered to go dark. They’re waiting for a destructive alien species to appear with their warships, at which point they will unleash hell. But the station gets no supplies, no news, and is forbidden to reach out.

After several years, paranoia breaks out, with different factions wanting to either maintain the original mission or go look for survivors from their home planet. When the battered warship HMS Blackbeard shows up, things really come to a head. Some are convinced it’s an alien trick, while others want to help.

That was difficult, but super interesting at the same time.

Yes, very disciplined. I realized early on that my books sold well enough to make a living at this only if I worked really hard and produced several books a year. I’m fortunate to have readers, but I’m no kind of bestseller. As a result, I write every single day when I’m in first draft mode, and don’t take time off between projects. It’s tiring, but it beats having a day job!

The thing I’m most proud of is that I never ever mail it in. For every series I’ve written the reviews get better and better with each book, and nobody says that I got tired and bored and put forth minimal effort. I don’t consider myself a brilliant writer, but I take it seriously, and always give my best possible effort.

I think of myself as writing fun, brain candy type stories, the kind that keep you flipping pages, with maybe an occasional subversive thought now and then to keep you reading. But sometimes I get emails from people who are seriously ill, or who are have gone through a terrible period of life, and they say how much my books helped lift their spirits. That sort of thing reminds me just how important storytelling is for our world.

I’m working on a brand new epic fantasy series that is unrelated to anything I’ve written before. That’s always a bit scary—will my old readers buy it?—but a lot of fun, too. For those who make it to the end of all the Blackbeard books, I’ve got an idea for a new trilogy in the universe. I’ll probably start that later this year.

My Amazon page has a listing of all my available works. If you like my writing style, and are willing to give different worlds a try, I guarantee that you will not run out of new books to read any time soon.

I also like hearing from people who’ve read my books, and if you’re a regular reader and have reviewed other books of mine, I’m looking for a few advanced readers of my new series. My email is [email protected] 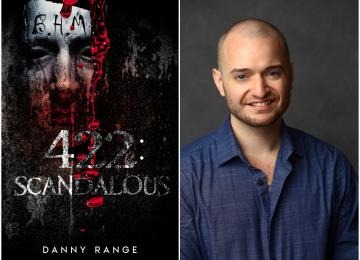 Danny Range - When a Former Gangster Pursues Real Life
FEATURED AUTHOR - Danny is a 29-year-old author, MBA, actor, public speaker, and screenwriter who is currently shopping this book to LA Executive for a TV adaption. He is also a survivor of suicidal urges and was raised by a single mother. As our Author of the Day, he tells us all about his book, 422: Scandalous.