Pat Dunlap Evans - Falling in Love With Your Characters

Pat Dunlap Evans - Falling in Love With Your Characters
Posted on 1st of December, 2016 by Naomi Bolton 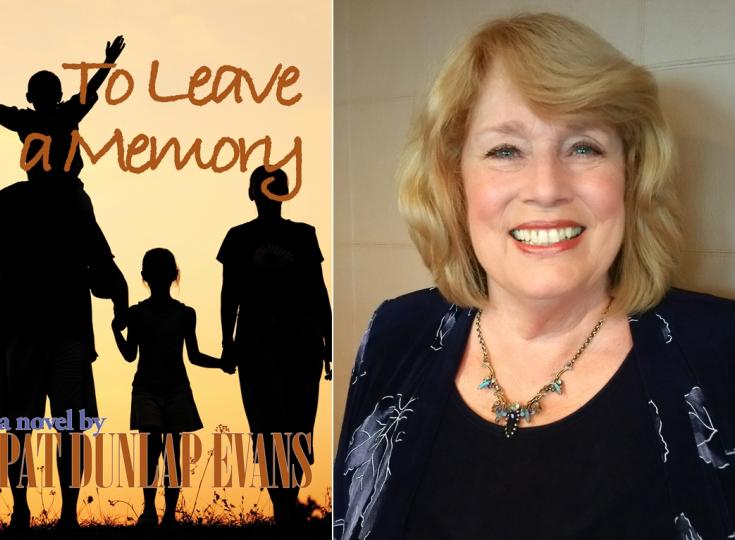 When Pat Dunlap Evans isn't dreaming about vacationing in Hawaii, she enjoys exploring the minds of her characters and writing about their inner struggles. After working in marketing and advertising for years, Evans quit her day job to become a full time novelist, and has never looked back. As our Author of the Day, we chat with Evans about her book, To Leave a Memory, how the main character, Andrew, was conceived after drinking a beer and how hard it is to stay disciplined as an author.

Please give us a short introduction to your book, To Leave a Memory

To Leave a Memory is a tender story about an estranged family that comes together to forgive and rediscovers how to love.

What inspired you to write a book about a professor and his family?

The main character Andrew spoke to me long ago during a creative writing exercise. I was a novice writer with the assignment of writing opening paragraphs in the voices of four completely different characters. I was so nervous, I drank a beer. And I imagined myself being the opposite of the young woman I was. The character turned out to be an old man, trying to atone after a tragedy and wondering how to leave his memories. I cast him as a professor because I needed for him to have the attributes of intellect, perspective and enough writing skills to attempt a novel -- his apologia for his tragic mistake.

You quit your day job to write novels. Was that a hard decision to make?

Financially, yes. Philosophically, no. Because my career was in marketing, PR and advertising, I'd spent many years writing on the job. The last thing a marketing pro wants to do on the weekends is sit at a computer and write. So I rarely worked on my own projects. Still, after quitting the day job, I found that I had to set boundaries and make time to write. Discipline is the number one trait a writer must have. Otherwise, you'll never finish anything, day job or not. 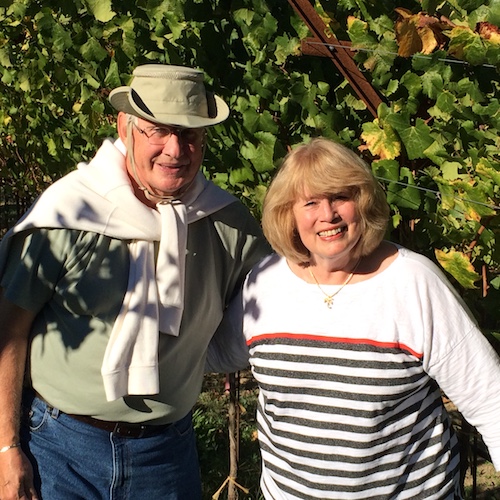 Even though your book deals with a lot of tragedy, you chose to also include humor.  Why did you take this approach?

Even in times of tragedy, humans often employ humor to lighten the load. In To Leave a Memory, the characters are intellectuals. Their wit and repartée came naturally. Andrew is an acerbic character, whose sarcasm protects him from pain and loss. Lizzy's lofty wit comes from her Unitarian heritage; she's an individualist in today's Southern culture. Her sidekick Ouisie (pronounced "Weezie") evolved from many women who have made me laugh to the point of tears. And the grandchildren helped bring sunlight into some very dark circumstances. The only "unfunny" character to me was the adult daughter Jane, who took everything too seriously, to the point of making herself miserable. But that was very much her character: a woman determined to solve the puzzle of her family's estrangement.

Among the wealth of characters in To Leave a Memory, who was the most difficult to create?

The secondary main character Lizzy and I grew to like one another more with each draft. She started out submissive -- she would have to be in order to tolerate her curmudgeon husband. But I didn't respect her for being so downtrodden. So with each rewrite, she evolved into a stronger woman, to the point I began the novel with her planning to leave Andrew and start anew. I felt that contemporary readers might not sympathize with a woman who had remained in an unhappy marriage for 30 years. But Lizzy is age 70, reared in a different era. Her devotion to Andrew is a key component in the novel's theme of abiding love.

Which character do you have the most in common with?

Not any of them, actually. Each character evolved from my imagination, and I got to know them along the way. Way back in grad school, when I first started writing fiction seriously, I could only write from an autobiographical perspective. But once I learned how to step outside myself, into another life and world, my imagination took off. I always fall in love with my characters, which makes it difficult for me to "write short." That's what a good editor can do for an author. Help her fine-tune the novel, instead of wallowing in the character's heart and mind to the point of ennui.

I am a former competitive swimmer, so I swim laps when I can find a good lap pool. I'm also webmaster for my local women's club, and I do publicity for various non-profit groups. I find that volunteering is the best way to meet new people. My two other "secret skills" are my cooking -- ossu buco rules -- and my golf game is not great, but I shoot in the 90s.

To Leave a Memory is your debut novel.  What was the experience like?

Anguish. I spent about three years querying New York literary agents because I hoped to land a "big" publisher. After pitching the novel to over 250 agents, I finally gave up. Quite honestly, I think the query system is broken, and I think that having literary agents as the sole gatekeepers to what should be published is a fallacious process. One agent, who had been a big-wig at some major publishing house told me, "You write beautifully, but your story is 'too quiet' for today's state of quality fiction." I disagree on that, as readers have told me they cannot put To Leave a Memory down. Even my son-in-law couldn't stop reading it, and he rarely reads fiction. That's because readers always want to be involved in the lives and loves of interesting characters. I don't think commercial novels have to be about some grand mystery or adventure. "The human heart in conflict," as Faulkner once said. Weave that theme through your novel, and you've got a story readers can care about.

Your book deals a lot with the topic of forgiveness.  Why was it important to you to write about?

Forgiveness came about as the novel evolved. At first, the story was about Andrew wanting to leave his memories, but as I was writing that first grad school exercise, the tragedy of Andrew's son's death appeared somewhat like a dream into one of Andrew's monologues. So the plot became two-pronged:  atonement and leaving a legacy. Writing that two-pronged approach was difficult, however. Recently, a book club member asked me, "In two words, what is this story about." My answer was "joyous redemption." But I think it's also about abiding love.

Oh, I wish I were more disciplined. As I said above, discipline is the number one trait an author must have in order to complete a work of length. There are so many distractions, mostly self-induced, like travel and volunteer activities and social events, so I have to set boundaries, set specific times to write, even take my laptop to the local library, where I get more done than when I stay around the house. Dogs and my retiree husband frequently intrude on my plans to write, as do dreams of my next trip to the wine country or the Big Island of Hawaii. 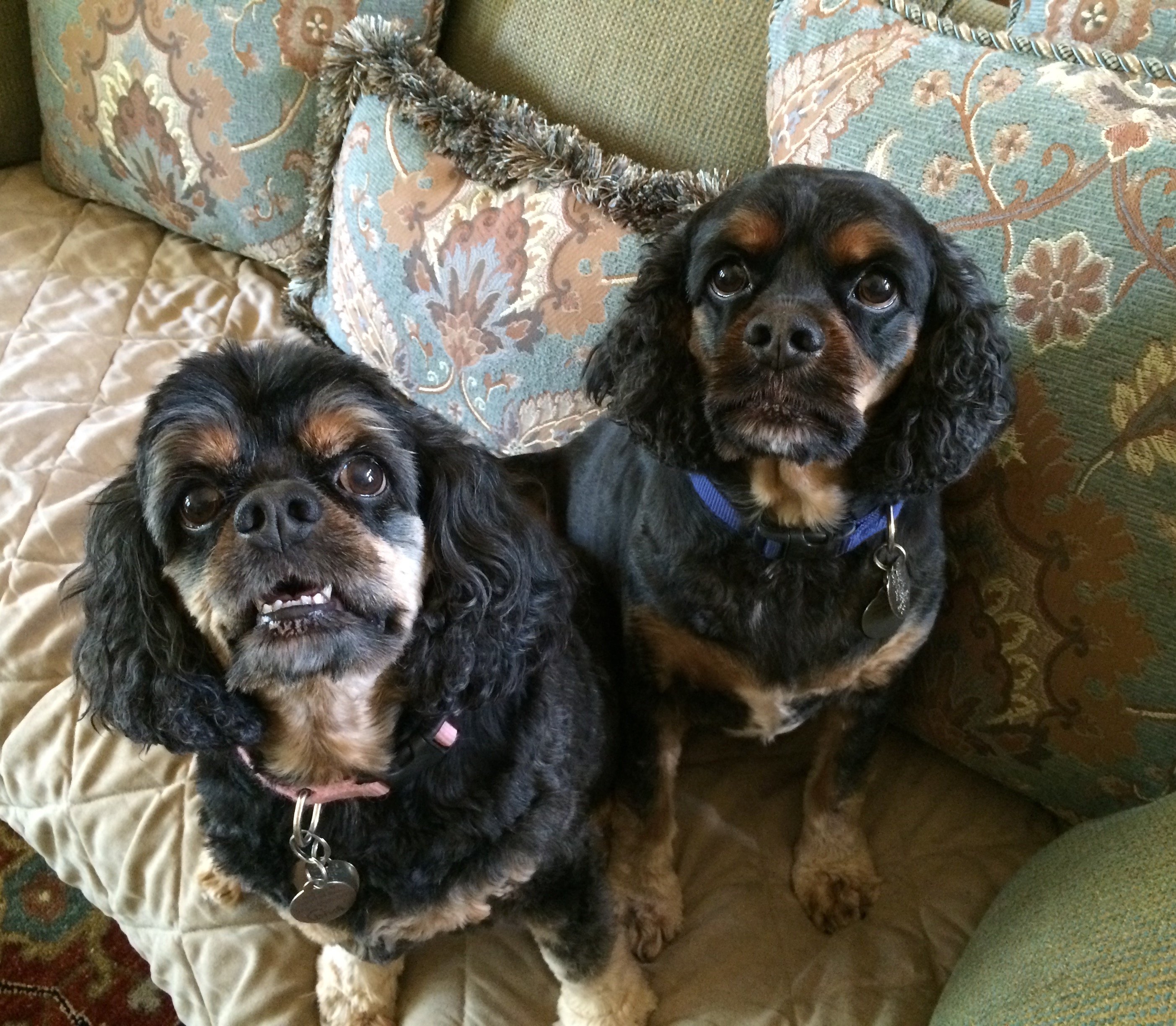 To Leave a Memory was a "see where an idea takes you" effort, and that's why the novel took years to complete. Only after I fleshed it out as a screenplay attempt, did I figure out the plot and all the characters.  My second novel Out and In is a women's mystery-thriller. That absolutely required an outline, so I created a road map and wrote the first draft in a year. I've created an even more detailed outline for my third novel. In a way, I wish I had done a road map for To Leave a Memory, as I took too many years to figure out what this story was about.

Readers say they would like to see a prequel and sequel for To Leave a Memory.  Are you thinking about making this into a series?

Not likely, but I do appreciate hearing that readers would like to have more about my characters. My second novel Out and In is a women's mystery, not quite in the "cozy genre," but even in that format, I can't see Out and In becoming a series. Series-oriented ideas work for many commercially successful authors but, for me, once a novel is done, it's done. I'd rather move on to meeting new characters. And I don't like the idea of being trapped in one genre. 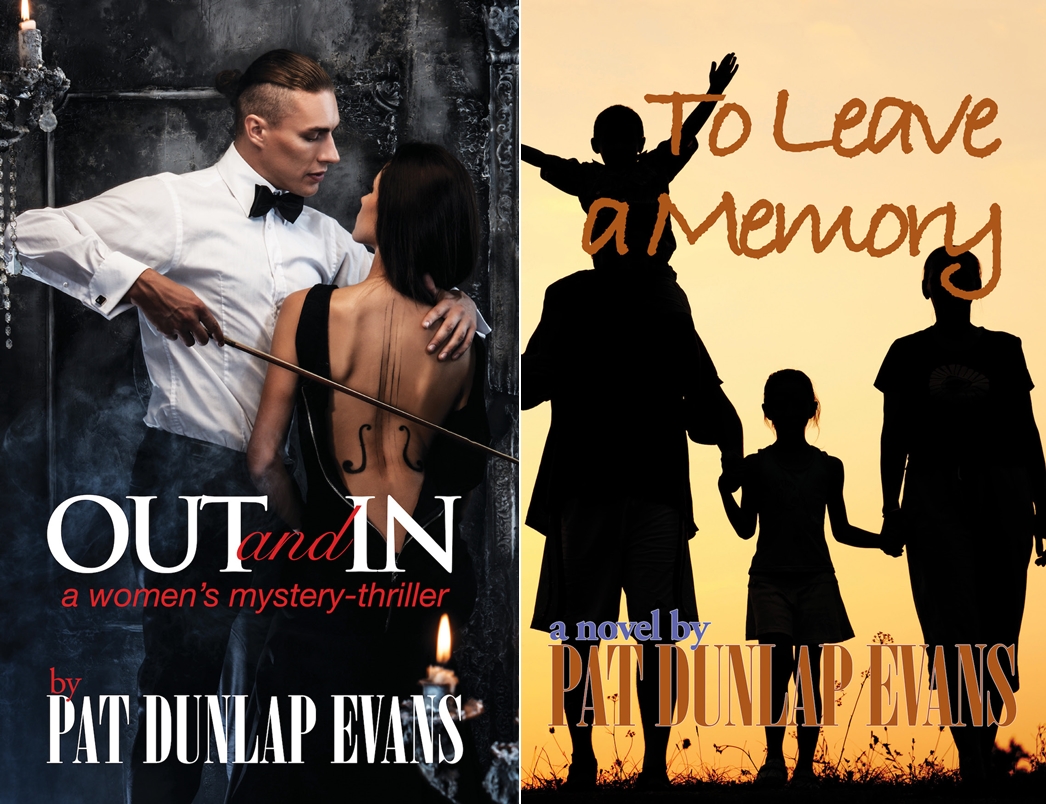 My latest is another mystery set in a mythological town called Greater Wrightway. This novel is more the "cozy mystery" genre, with a female mayor as an amateur sleuth trying to find the murderer of the town's leading women. Sounds fairly ordinary, but the small town is a character in itself, locked in yesteryear, unable to grow, unable to evolve, and that metaphor carries over into the plot.

Both of my published novels are available on Amazon, Amazon Kindle, BN.com and BookPeople.com. My Facebook page is Pat Dunlap Evans (Author), where I enjoy interacting with readers and other authors, as well as on Goodreads.com, where I have an author page. I do giveaways on Goodreads and my Web site from time to time, so readers should sign up for alerts. One of my favorite things to do is present at book clubs or at libraries. I offer two presentations: "Truth or Fiction? Only the Author Knows for Sure," and "The Voice of the Story Teller." In each, I use examples from famous authors, as well as my own work. I can present via Skype to book clubs outside Texas, or in-person to book clubs within 300 miles. To inquire, send a note to [email protected]. My Website is PatDunlapEvans.com, but I don't feed it as often as I should. Too busy writing, marketing my work and tending to my husband Bill and our two Cockalier dogs, "Meryl Streep" and "Lord Byron." 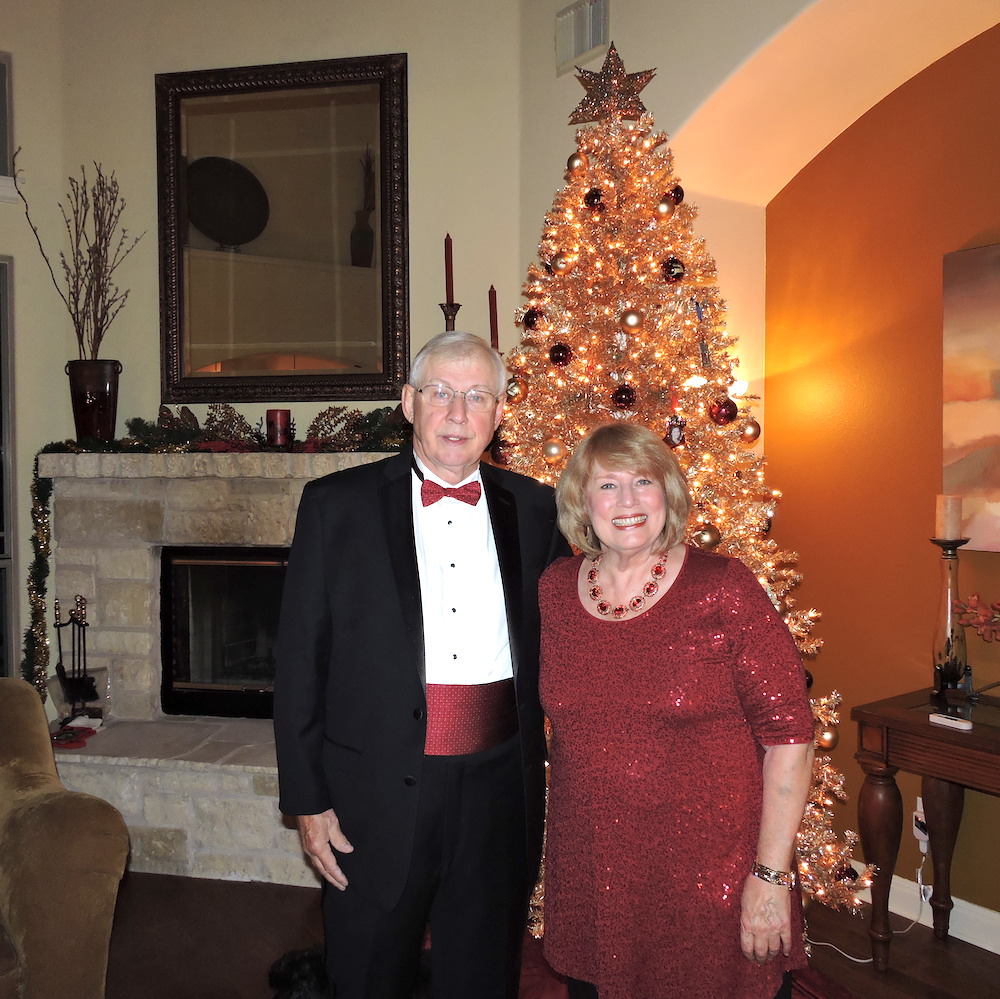 Thanks for this opportunity to wish all of my readers a wonderful holiday season.