Rebecca Rosenberg - Uncovering the Secrets of Houdini and the Londons
Posted on 28th of November, 2018 by Naomi Bolton 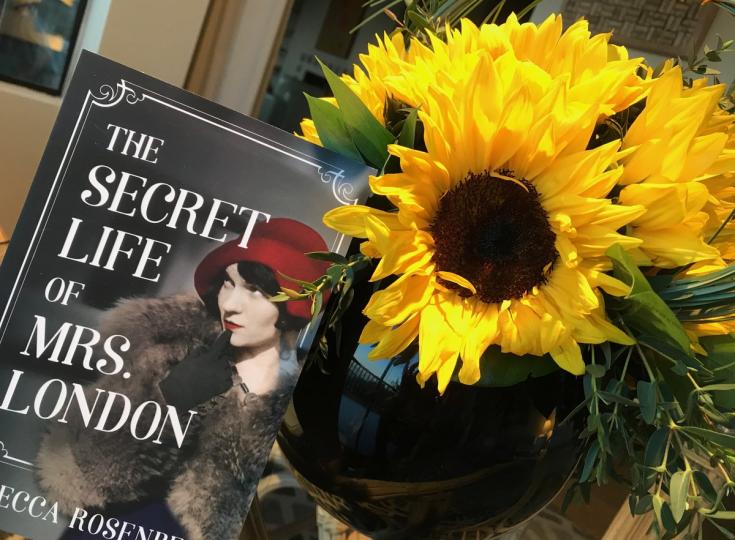 A California native, Rebecca Rosenberg lives on a lavender farm with her family in Sonoma, the Valley of the Moon, where Jack London wrote from his Beauty Ranch. Rebecca is a long-time student of Jack London’s works and an avid fan of his daring wife, Charmian London. The Secret Life of Mrs. London is her debut novel, following her non-fiction, Lavender Fields of America. As our Author of the Day, she tells us all about it.

Please give us a short introduction to what The Secret Life of Mrs London is about.

San Francisco, 1915. As America teeters on the brink of world war, Charmian and her husband, famed novelist Jack London, wrestle with genius and desire, politics and marital competitiveness. Charmian longs to be viewed as an equal partner who put her own career on hold to support her husband, but Jack doesn’t see it that way…until Charmian is pulled from the audience during a magic show by escape artist Harry Houdini, a man enmeshed in his own complicated marriage. Suddenly, charmed by the attention Houdini pays her and entranced by his sexual magnetism, Charmian’s eyes open to a world of possibilities that could be her escape.

As Charmian grapples with her urge to explore the forbidden, Jack’s increasingly reckless behavior threatens her dedication. Now torn between two of history’s most mysterious and charismatic figures, she must find the courage to forge her own path, even as she fears the loss of everything she holds dear.

What inspired you to write a book about a love triangle involving Houdini?

I wanted to write a book about the adventurous, free-loving, fiercely philosophical and political Jack and Charmian London, who built a ship and sailed the world in 1906, wrote 50 books together in 15 years, were leaders in the socialist party, leaders in the literary world…besides dedicated ranchers with one-thousand-acre Beauty Ranch in Glen Ellen, California. That would have been enough story for a series!

But when I discovered that Charmian London had an affair with Houdini, I saw an opportunity to explore the lives of the two most famous men of the turn of the century and their wives. Jack London and Harry Houdini pushed the boundaries of what it is to be human. Houdini with his death defying escapes and Jack London with his exploration of the human condition. Nothing was taboo: thinking dogs, alcoholism, love triangles, astral projection, time-travel…

Their wives were equally as interesting, and the world hadn’t known them! I was driven to find out why these two devoted couples had affairs, and I discovered there were good reasons, which become the many “SECRETS” divulged in THE SECRET LIFE OF MRS. LONDON.

What do you think makes Houdini so interesting that even today people still can't stop talking about him?

Houdini transformed himself from a vaudeville magician to the world’s greatest escape artist, a genre of entertainment that never existed. He created these escape acts through his razor- sharp intelligence, magnificent athletic body, and his willingness to risk his life. Besides this, he was a master of publicity and marketing, and worked constantly.

Houdini's masterful escapes in THE SECRET LIFE OF MRS. LONDON, include his Chinese Water Torture Chamber, Upsidedown Straight Jacket escape off a high rise, Prison Escapes, Underwater Crate Escapes… There wasn’t a jail cell or bank vault he could not escape from. He performed his magic and escapes all over America and Europe, even for the German Chancellor and the Russian Tsar.

You live across from Jack London's ranch - how has this influenced your writing?

I was able to write THE SECRET LIFE OF MRS. LONDON at Beauty Ranch, which is now Jack London Park. That meant I could sit on their steps, see Jack London’s sleeping porch, smell Thanksgiving dinner cooking in their large lodge kitchen. I explored the ruins of Wolf House, the London’s 25,000 sq. foot lodge that mysteriously burned before they moved in. I hiked up to the oldest redwood where the Londons first made love. I experienced their ranch in all seasons and brought their parties, and workdays to life in the novel. A rare and wonderful treat.

The most bizarre coincidence was that I had a hard time believing Wolf House could burn down, with its massive stones and slate roof in 1913. But last fall my own house, barn and entire lavender farm burnt down along with 6000 other homes. Our house was stone, brick and tile!

In a way, I researched for twenty years, hiking through Jack London Park and frequenting their museum and the London’s home, winery, pig palace, stables, etc. Over that time, I read many Jack London books and Charmian’s books as well. Researching the book led to reading many Houdini and London biographies as well as visiting Huntington Library where Charmians diaries are held. My favorite and most important source was Charmian’s biography: Jack London. Her voice was very present, and I could understand and embody her.

I play Chinese Mahjong every Friday with my girlfriends! I love champagne and research it for my upcoming CHAMPAGNE WIDOW series whenever I get the chance!

Tell us more about Charmain. What makes her such a fascinating character?

Why did two of the most iconic famous men of the 20th century love Charmian London? She was a remarkable woman ahead of her time. Raised by her aunt in a triad with two “uncles”, Charmian was brought up with Free Love, a concept she wrestled with Jack. The bohemians of the time believed in Free Love, but as you will see in the novel, while Charmian explores it, she realizes it doesn’t work for the human heart.

Charmian London educated herself through college—both Houdini and Jack London quit school in the 3rd and 8th grades! Charmian worked as assistant to the Mills college president and as an editor and reviewer at the Overland Journal, where she met young Jack London, while reviewing his first book.

Charmian was a champion horsewoman, a concert pianist, a consummate, tireless hostess at Beauty Ranch where the Londons entertained a constant stream of poets, politicians, farmers, prisoners, scientists, writers, and…magicians.

Charmian helped Jack London write 50 books in 15 years. She would listen to his stories and type them up at 150 words a minute, later editing and embellishing. She was his muse, his typist, editor, manager. Mostly, she managed his moods, which ran from depression to manic.

Most love stories are about two single people finding each other. Yours is about passion, jealousy and competition.  How hard was it for you to write about flawed characters and a taboo relationship and still make them likeable?

First of all, the time they lived was more than a hundred years ago, and Free Love was explored by many people in America, including the Spiritualists and political parties. Secondly, I discovered the personal “secrets” behind their affairs, and I discovered the Houdinis and Londons as people, with needs and secrets. Both couples harbor secrets which drive them to seek solace and love… without spoilers, I’ll leave it at that.

Readers say that this book is a real page turner. How did you manage to grab their attention and keep it right until the end?

The Londons and Houdinis are so dynamic that there is always something BIG happening! Magic shows, Thanksgiving dinners with bullet-catching contests, Wolf House burning, sailing to Hawaii with lepers and luaus, visiting Houdini in New York City performing his elephant disappearing act! I think the action and their complex emotions kept the story moving!

How much of this book was based on fact and how much is fiction?

Maybe 90% fact. The Houdinis and Londons met, hit it off, had Thanksgiving together, corresponded, were friends until Houdini died… Charmian and Houdini had their torrid affair… While we do not know exactly what they said to each other, by studying who they were and what they would talk about and how they would act, the story comes together.

I would have a gay old time with Bess Houdini and invite her to my Mahjong Majesties group! She would be the life of the party. I would serve Pink Ladies, and Bessie would crack jokes and smoke “weed” (it is undetermined whether that was tobacco or marijuana!) Bess Houdini was a showgirl at Coney Island when Houdini met her. She was the original flapper and had such a quirky personality which I discovered through research. She would lie to reporters all the time, telling untruths about how the Houdinis met and going to visit children they didn’t have. Bess Houdini collected 100,000 dolls and kept a menagerie of pets. She wanted children badly… but couldn’t. That is her secret revealed in THE SECRET LIFE OF MRS. LONDON!

Love is much deeper than we know.

My next novel is GOLD DIGGER, the remarkable Baby Doe Tabor (March, 2019)

1878, Colorado. When her family loses everything in a fire, twenty-year-old Lizzie Doe is forced to marry and go west to prospect a gold mine in Colorado. She is determined to send money home to her parents. Miners, unaccustomed to such beauty, nickname her Baby Doe, after a newborn dear.

Baby Doe finds herself abandoned, pregnant, and running the gold mine alone. She attracts the attention of the new Silver King, Horace Tabor, a married man twice her age. When she takes Tabor as a mining partner, she finds an extraordinary passion, even as she struggles with the seventh commandment. Political and society circles buzz with scandal and she leaves Tabor rather than destroy his reputation. But Tabor, unable to live without Baby Doe, divorces his wife and marries her just as he becomes a U.S. Senator in the nation’s capital.

The Tabors’ bliss is not to last. The Silver Purchase act is repealed, and silver becomes worthless. As their fortune collapses, society thinks the beautiful, young Baby Doe will leave Tabor. But she takes over their finances while he scrambles to work gold mines, until all is lost. Except the Matchless Mine.

Another interesting link to check out:  THE SECRET LIFE OF MRS. LONDON, WIKI’S 12 MARVELOUS NOVELS ABOUT 20TH CENTURY https://wiki.ezvid.com/m/kNkCn2l8yxVIl 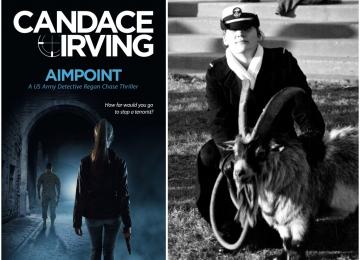